Across Australia, we’ve seen a sudden upsurge in expanded abortion and euthanasia laws.

Which is probably confusing, because you were probably under the impression that we just had a federal election which returned a conservative government.

We no longer have enough engaged, interested Catholics to resist the stampede of anti-life legislation that’s being passed all over the country.

If it’s any consolation, our Protestant brothers and sisters have the same problem.

I have been to many interdenominational pro-life events, only to see the same scanty group of people each time, even though many report that their community churches are full to bursting on weekends.

There are fresh challenges facing anyone who wants to enter public life as a professing Catholic. One vital area in which practicing Catholics should be mobilising is in the defence of free speech.

The Church thrives in a society where it’s free to spread the Gospel unmolested, and free speech is also closely connected to life issues.

There are clear cases of Facebook bans being applied to pro-life events in Australia, and it’s almost impossible to secure any air time for an alternative voice in the mainstream media.

Getting the movie Unplanned to Australia and into cinemas has also taken a heroic effort from many good people.

As always, demography is not on our side. There are only about 600,000 practicing Catholics in the entire country, with around two-thirds over the age of 60.

The mid-20th Century innovator Buckminster Fuller said that the way to get rid of a bad structure was to create a good structure that made the bad one obsolete.

This is where we may have to devote our time and energies now – to authentically Christian charities and health services that provide compassionate and realistic alternatives to coerced abortion and euthanasia.

Unfortunately it’s going to be difficult for existing Catholic hospitals and health services to hold the line against the culture of death. Most of these are not actually independently wealthy, but rely increasingly on government payments and subsidies in order to deliver care.

The trade-off for this is that they have to meet increasingly complex guidelines and standards, which can easily be amended to include the provision of, say, euthanasia in a Catholic nursing home.

We would like to think that there would be opt-out and conscience clauses in any legislation, but given the painful battles fought by individual religious orders in the US against the federal government there, it could get just as messy here.

We’ve already seen how impossible it is for medical practitioners to protect their conscience in abortion referrals, and how easy it is for them to be prosecuted.

Most religious orders that provide health care began with one or two people and a small building, and very basic but loving care. There’s no government funding, but no one is legally murdered or neglected.

Mother Teresa’s nuns have been providing this form of health care for decades, in the face of unjustified criticism from affluent Western atheists who think that health care should only be provided if it’s expensive and high-tech.

We already have many small organisations that are providing wraparound care to women and couples with crisis pregnancies.

They do this with no government funding, so that the agency has the freedom to encourage and support their clients appropriately. 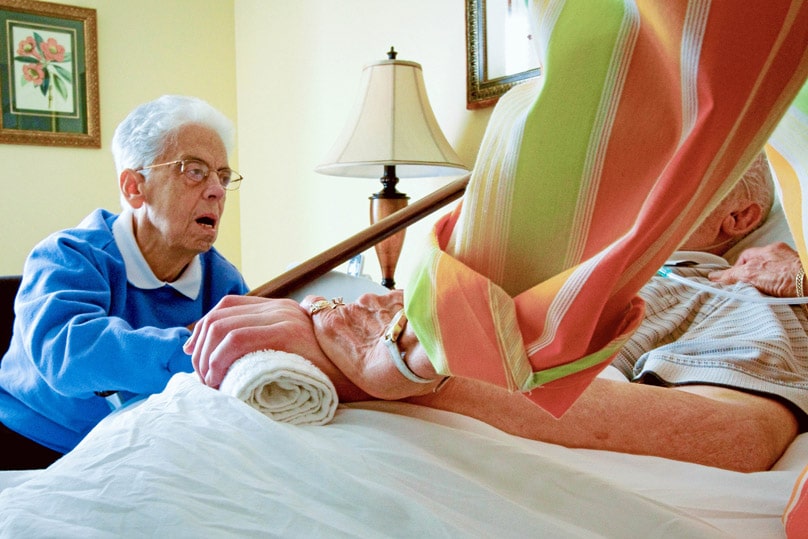 This is voluntaryism and subsidiarity at its very best, where money is spent on the client and not on office suites. It’s a social justice issue we can all get behind.

We may have to go back to something as simple as this to provide good palliative care to people who don’t want to be euthanised.

It won’t be fancy, but it will come out of the Church’s burning heart of love – and hopefully the costs could be offset from some of those property portfolios.

If the Church in Australia can redirect its time and treasure into providing living alternatives – even in the face of threats of loss of government health funding – then we will be providing a genuine culture of life that will draw more people to its countercultural light.