There are so many things that can be said about the passage of the abortion-till-birth bill through the Lower House last week.

We could talk about the ramming through of a Labor-Greens policy under the banner of a Berejiklian-Greenwich government.

We could talk about the “lipstick on a pig” amendments that did nothing to make this evil bill any better.

Or we could talk about the chilling, cackling laughter from MPs that was heard throughout the Parliamentary chamber after the bill passed.

For anyone who heard it, the sound could only be described as demonic.

But I won’t explore those in any detail this week. Instead, I want to talk about two other aspects of last week’s debate that really struck me.

The first was the twisting of Catholicism and Christianity more broadly in support of this bill.

Not only did the MPs ignore the clear teaching of the Church on abortion and the clear messages from the NSW Bishops against the bill, but some went as far as to use Scripture to support their position.

One MP rose to mention his mother, a daily Mass attendee, and his own love for the Catholic Church and his Catholic faith, before promising to not impose that faith on the people of NSW.

Another spoke of her regular Mass attendance, before quoting Jesus’ exhortation in Luke 6:37 against judging others.

Indeed, the citing of this item of Scripture or the similar verse in Matthew 7 to justify the sanctioning of abortion was a regular theme throughout the debate.

One MP was particularly creative, quoting two Vatican II documents on the importance of conscience to justify her anti-life vote.

I wonder whether these Mass-attending, Scripture-quoting Catholics listened to the Gospel on the Sunday after the vote.

If they had, they would have heard Jesus say the following:

“That servant who knew his master’s will but did not make preparations nor act in accord with his will shall be beaten severely; and the servant who was ignorant of his master’s will but acted in a way deserving of a severe beating shall be beaten only lightly. Much will be required of the person entrusted with much, and still more will be demanded of the person entrusted with more.”

In other words, Jesus expects more of the Catholics in Parliament.

They have been entrusted with much – the fullness of the truth and the sacraments and the responsibility of governing this great state – and so much more is demanded of them.

Their ‘yes’ vote is worse than that of any other MPs, because they knew better.

It wasn’t only the MPs that were betraying the Gospel of Life (and the Gospel more generally) last week. Disgracefully, certain Christian leaders did too.

Newcastle’s Anglican Bishop, Peter Stuart, wrote to MPs asking them to support the bill, as it would move abortion into the more appropriate framework of “healthcare.”

Thank God the Sydney Anglicans were solid on this issue, with Archbishop Glenn Davies even attending the vigil outside Parliament House with Archbishop Fisher on Monday. 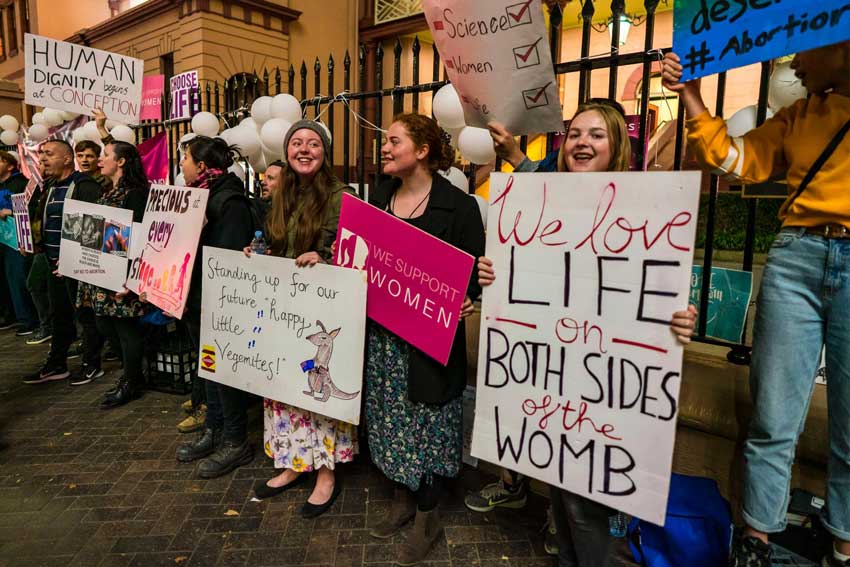 A sign reading “Care for Creation” hung outside Pitt St Uniting Church throughout the debate.

Ironically, it bore not an anti-abortion message, however, but an anti-coal one. Because #progressive.

Thankfully, there was no such confusion about the Catholic position outside Parliament.

Thousands upon thousands called their MPs asking them to vote against the bill, with many MPs mentioning the unprecedented number of phone calls received in their offices about the bill.

The second thing that struck me was the way in which men were derided throughout the debate.

Those who rallied in favour of abortion ridiculed the men standing for life, saying vile things about them, and ordering them to stay silent.

Inside Parliament, the message was heard, with male MPs standing up to let everyone know that he did not have a right to have an opinion on this issue, almost apologising for exercising his vote at all.

The shame of it is this: one of the key reasons that abortion is so widespread in this state is too many mothers feel that abortion is their only choice; they know that the child’s father will not support them, and society has dropped its expectation that they do so.

The absence of men is a contributor to the scourge of abortion; not the answer to it.

This attempt to sideline men stood juxtaposed to the approach of the pro-life side.
From our faithful Bishops and clergy, to the 22 MPs who stood for life inside Parliament, to the hundreds who stood outside Parliament not only for life, but also making sure that women and children present were safe, to the countless who didn’t stand, but knelt, in prayer in St Mary’s Cathedral and other places these past weeks, the voices and the presence of men were welcome and encouraged.