Before considering what the Eastern Catholic Churches are, and their place in the Catholic Communion in Australia, perhaps a word on what they are not.

* they are not fossilised communities.

* they are not ecclesiastical museums.

* they are not migrant chaplaincies.

* and please, they are much more than “colourful”!

In Australia, Eastern Catholics, mostly from the Middle East, had arrived in Sydney by the middle of the 19th century, and were established as parish communities with clergy and churches by the end of the century.

From the beginning of their arrival, the Eastern Clergy and Faithful have enjoyed the friendship and support of the local Latin bishops and clergy. Perhaps, it is something in the Australian character to welcome strangers and ask questions later.

What the Eastern Catholic Churches are:

* They are the contemporary manifestation of the ancient churches which evolved from the first apostolic communities in various parts of the Roman Empire.

* Despite a long history of regional disturbances, they have maintained their connection with the earliest sources of the Christian Faith, especially the teaching of the great Fathers.

* The Catholicity of the Church is assured by her diversity of ecclesial traditions. East and West are the mutual guarantee of the catholic identity of each other; otherwise, the Western Catholic Church becomes simply the church in the West, and the Eastern Catholic Churches become no more than the churches in the East. However, together, and in communion with the Pope of Rome, they constitute the Cattolica.

* The Catholic Church is blessed to have a truly universal and historically authentic tradition. There has never been a time when there were no Eastern Christians in communion with Rome.

* With all this in mind, I know that I speak for my brothers the Hierarchs of the Eastern Catholic Churches in Australia, together with their Clergy and Faithful, when I say that we are grateful and joyful that we were able to participate in this Plenary Council. We all hope that our involvement will be a happy reminder of the Universality of the Church.

It is good to recall the words of Pope St John Paul II in his Apostolic Letter, Orientale Lumen, “I believe that one important way to grow in mutual understanding and unity consists precisely in improving our knowledge of one another. The children of the Catholic Church already know the ways indicated by the Holy See for achieving this: to know the liturgy of the Eastern Churches; to deepen their knowledge of the spiritual traditions of the Fathers and Doctors of the Christian East, (and) to follow the example of the Eastern Churches for the inculturation of the Gospel message….”

* The Eastern Catholic Churches are indeed the custodians of a priceless heritage. In their several Australian Communities they preserve a precious treasure and an irreplaceable component of what it is to be Catholic….and it is a treasure they wish to share with their Roman Catholic sisters and brothers in Christ. 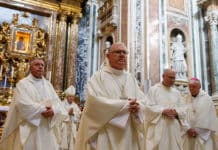