I’ve listened to all sorts of wonderful input but I’m still led back to a certain point.

The motif of Vatican II was to read ‘the signs of the times’. That’s what we are called to do also. How we respond and discuss in the Plenary depends on how we read those signs.

I would say that the ‘sign of the times’ is a deep spiritual crisis in all the West, Australia included, demonstrated as a crisis of meaning, truth, identity. There have been few references to that.

The solution? I’m not sure but I would say the Church can’t be a witness to hope in this world until its membership starts to live in an uncompromising way a daily commitment to penance, prayer and a radical devotion to Jesus Christ, to the sacraments and to scripture. This is where we need to start. From there flows justice, healing and care. Fr. Brennan in his early homily rightly said we must attend to ‘matters of the heart’. I couldn’t agree more. The listening heart requires all of the above!

However, the secular world is hostile to the Church. The abuse crisis and the trauma it caused didn’t help that. Even if the abuse hadn’t happened though, the hostility of secular ‘opinion’ to the Church would still exist.

The reality of life for believers I suspect will become more difficult as time goes on. Around Australia, we are seeing aggressive anti-faith state laws which seem to be gaining pace.

Issues around defending the conscience of individuals and Catholic institutions should be paramount for the Church.  The increasing State attacks on Christian faith has been rarely addressed in the Plenary.

I think there is an implication by some that secular society is benign, and that’s it’s only the Church that needs to change. I think both need to change and the secular world certainly needs the Church and the Lord it proclaims.

I do believe we are called to be ‘countercultural’.  This is to be both a defence and a strength for ‘witness’ in the world.

This is where I look for leadership from our bishops and other Church representatives.

From the Office we read that: “God is ever creative”, “His love renews all things”. I’m sure everyone at the Plenary believes that. Cooperating with the Lord, though, requires a correct summation and interpretation of the ‘signs of the times’. A weighty task indeed. 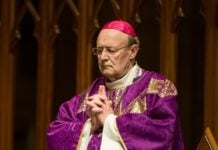