When Australia’s bishops visited Rome for their Ad Limina pilgrimage to meet Pope Francis in July, they brought quinquennial reports (reports prepared every five years) on each of their dioceses or archdioceses to submit to the Holy Father and the relevant Vatican dicasteries.

The reports constitute a comprehensive snapshot of a diocese at every level and are full of statistical information of the kind which helps Vatican authorities keep track of not only how a diocese is progressing but also help build up the bigger picture of how the Church is travelling around the world.

Excerpts from the Sydney report have been included in recent editions of the Ad Clerum newsletter which goes out to clergy from the Archdiocesan offices in the Polding Centre.

The August Ad Clerum, for example, revealed that there are 174 priests incardinated in the Archdiocese of Sydney who exercise their ministry within the archdiocese.

In addition, there are 245 priests from religious orders and institutes whose ministry is also in the archdiocese, together with another 60 priests incardinated in other dioceses but who serve within the Archdiocese of Sydney.

Last week the Archdiocese celebrated the ordinations of seven young men to the priesthood, all in their 20s or 30s. However they are far younger than the median age of active priests in Sydney, which is 63.

The median age of retired clergy, meanwhile, is 80. 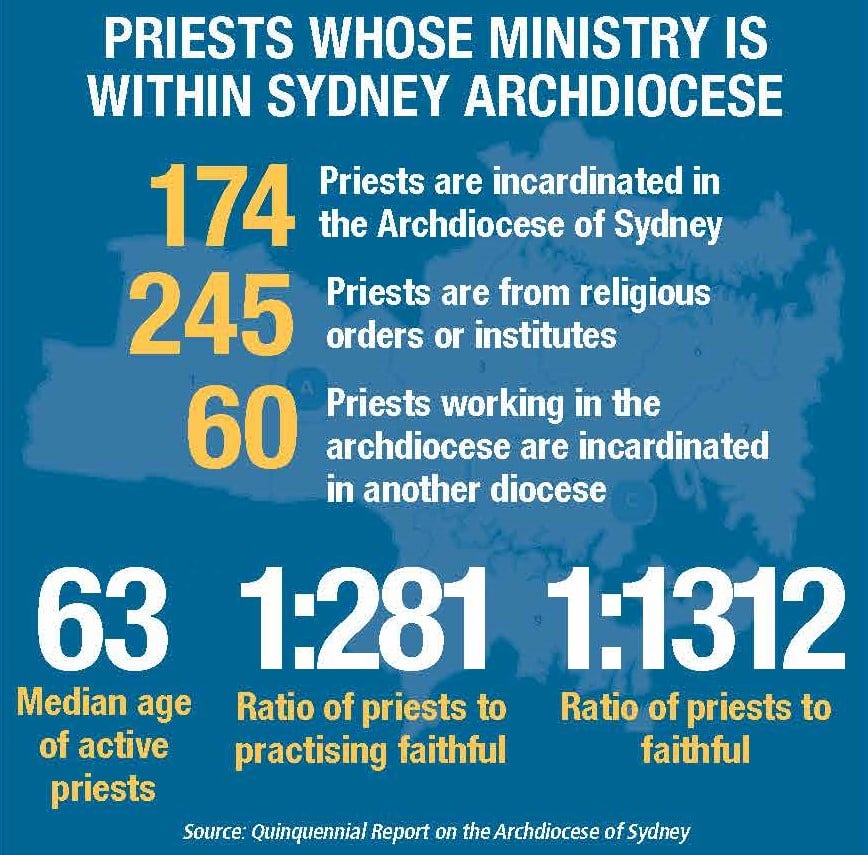 The Archdiocese is made up of 135 parishes, with the average number of faithful participating in the life of the parish being 692.

Of archdiocesan parishes, 104 are entrusted to diocesan clergy with the remainder entrusted to the ministry of religious clergy.

Sydney priests are also working in missionary fields, the Ad Clerum revealed, in Peru, Papua New Guinea, South Australia and regional NSW. In addition to these, Sydney laity of the Neocatechumenal Way are also living and working in missions in PNG, in the archdioceses of Brisbane, Melbourne and Adelaide and in the dioceses of Broken Bay, Wollongong and Parramatta.

Several religious from the Sisters of St Joseph, the order founded by St Mary MacKillop continue to serve overseas as well, the report noted.

Sydneysiders also strongly support missionary work, with the annual financial contribution from the Sydney Archdiocese to the missions totalling $2,563,118.