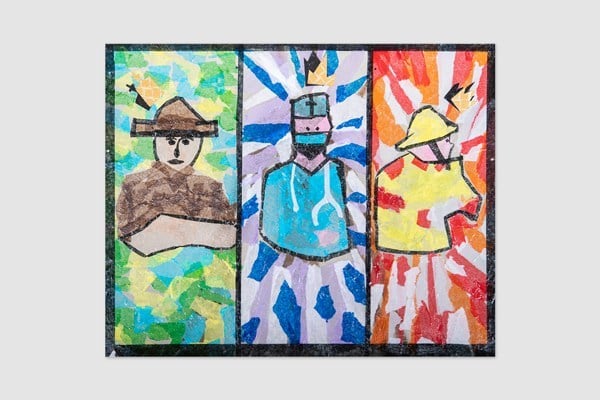 The silent witness of the donkey at the Nativity scene, Herod the puppeteer, and modern-day Magi depicted as a farmer, doctor and fireman – they are among the themes portrayed in a Catholic schools’ Christmas Story Art Exhibition and Competition.

About 12,000 Year 5 and 6 students from schools in the Archdiocese of Sydney, Wollongong and Bathurst took part in the annual project this year.

They engaged in the Religious Education Curriculum and the Scriptures to produce artworks and accompanying reflections that spoke to their understanding of the Christmas story.

Of the 742 artworks submitted for judging, 95 were selected for exhibition and 27 were awarded prizes.

Abby was awarded the Executive Director’s Award and the Year 6 second prize during a video launch presentation on Sunday, 29 November, which you can watch below.

“The launch event has traditionally been held on this day, the First Sunday of Advent, at either the Sydney Cathedral Crypt or The University of Notre Dame in Sydney,” said Jodie Micallef, Sydney Catholic Schools’ Specialist: Religious Education.

However this year, due to the COVID-19 crisis, the exhibition is going virtual for the first time.

In addition to Jodie Micallef, this year’s judging panel comprised:

Artist-educator Amanda McPaul-Browne has been judging this competition for nearly a decade. Her preferred medium is acrylic paint on canvas, although she also loves to draw using graphite and coloured pencils.

In the past four years, she has had three solo art exhibitions.

Asked her thought process when critiquing student art, she said: “I look for originality, both conceptual and visual; a multi-layered and balanced composition; an artwork that communicates clearly and is able to engage the viewer on an emotional level.”

She also looked for competency in the chosen medium and a developed level of seeing and applying colour and tonal variations.

“I look for personality, in both the reflection and in the artistic expression,” Ms McPaul-Browne added.

“The originality and vibrancy of the artworks struck me, as well as the heightened level of sensitivity in the artistic expression” – Amanda McPaul-Browne

Mrs Micallef, who has been a judge of the Christmas Story Art Exhibition and Competition for five years, said she never tires of being part of this project, which has been shining a spotlight on children’s creativity and their spirituality since 2005.

Despite the impacts of students learning at home during the coronavirus pandemic, she said this year’s competition continued to attract work of an “extremely high standard.”

“It never ceases to amaze me how each year the standard of students’ work becomes more sophisticated,” Mrs Micalleff said.

View our virtual gallery showing all our finalists and winners’ artworks, including winner’s reflections on their art, and watch the video launch presentation below.