This can be a wonderful year, if we cooperate with grace

When Jesus was beginning his ministry in Nazareth, he started by going into the synagogue on the Sabbath and reading this announcement from the prophet Isaiah:

“The Spirit of the Lord is upon me,
because he has anointed me to preach good news to the poor.
He has sent me to proclaim release to the captives
and recovering of sight to the blind,
to set at liberty those who are oppressed,
to proclaim the acceptable year of the Lord.” (Lk 4:18–19)

In choosing this reading Jesus was looking backward through multiple layers of Israel’s history in order to look at the present hour and, from there, forward to his Messianic Kingdom without end.

The first layer was, of course, the prophecy of Isaiah himself, announcing glad news to the people of Israel who had, seven centuries before Christ, been through the wringer of defeat, deportation to Babylon, seventy years’ captivity, and then miraculous repatriation to the Holy Land. Isaiah’s announcement was itself a reference to Israel’s own sacred history and harked back to the Exodus from Egypt, the covenant with God at Sinai, and the Year of Jubilee God had prescribed for Israel. That is what the “acceptable year of Lord” refers to.

Not a few people have a superstitious view of the New Year that, merely by ceasing to be the awful year of 2020 it will somehow magically be the good year 2021. But again, that is magical, not sacramental, thinking.

The idea of the Jubilee Year was to extend the blessings of the Exodus into Israel’s future.  Slaves were to be set free, debts forgiven, accumulated wealth returned. It was to be a sort of grand reset button whereby the community of Israel would put human beings before things and a general brotherly equality ordered toward the common good would prevail over selfishness.

Unsurprisingly, it never happened. In this, as in so many other things, Israel failed to keep the covenant, ultimately leading to the catastrophe of the Babylonian Captivity Isaiah and other prophets foretold.

But since God’s will is for our good no matter what, the grace of the Jubilee was given to Israel anyway as the yoke of Babylon, Israel’s new Egypt, was lifted from their shoulders with Isaiah’s cry:

Comfort, comfort my people, says your God.
Speak tenderly to Jerusalem,
and cry to her
that her warfare is ended,
that her iniquity is pardoned,
that she has received from the Lord’s hand
double for all her sins. (Is 40:1–2)

But here’s the thing: Isaiah does not simply have in view Israel’s Second Exodus from Babylon as the end of the story. Rather, he prophesies repeatedly of a coming figure—the Messiah or Servant of the Lord—who will consummate the promises and prophecies given to Israel in some profoundly deeper way than even this miraculous delivery.

That is what Jesus is referring to when he reads from Isaiah in the synagogue at Nazareth and declares, shockingly, “Today this Scripture has been fulfilled in your hearing.” (Lk 4:21). He is telling them that he is the Messiah Isaiah foretold.

Jesus takes the image of the Jubilee Year and applies it to himself just as he will later take the image of the Temple and apply it to himself by saying, “Destroy this temple and in three days I will raise it up.” (John 2:19). He does not mean he is announcing the start of a Jubilee Year. He means that he is the true Jubilee setting us free from slavery to sin and cancelling our debt of our guilt, just as his body, not a mere stone building, is the true dwelling of the Spirit of God. 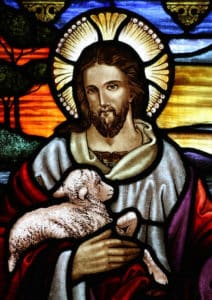 The biblical understanding then, is that not just places, but time, can be hallowed and set apart to some special service to God. Not only the space called the temple could be set apart for God, but the time called the Sabbath Day could as well. And not simply days, but even years—such as the Jubilee—could as well. And because God’s Spirit could enter into such created things as buildings and special times, He could (and did) enter into the human race in the person of the Incarnate Son Jesus Christ.

And because of that, God can still take created things like water, bread, wine, oil, and even you and me and make them sacraments of his grace at work in the world. Through such sacraments, human beings can be made “partakers of the divine nature” (2 Peter 1:4) and, ultimately, all of creation can made into a “new heaven and a new earth” (2 Peter 3:13).

This is the Catholic way of looking at our relationship with creation, including with that brand newborn creature 2021.

Many people have a superstitious or even magical view of time rather than a sacramental one. The magical view of time (often deeply believed by people with no belief in God at all who consider themselves scientific and modern) is that the mere fact of a date somehow proves an idea false. You know: “You don’t mean to tell me you believe Jesus actually rose from the dead?  This is the 21st Century!” One might just as well say, “But this is Monday, January 4th!” The time of day has nothing to do with whether something is true or not.

Similarly, not a few people have a superstitious view of the New Year that, merely by ceasing to be the awful year of 2020 it will somehow magically be the good year 2021. But again, that is magical, not sacramental, thinking. The year 2021 can be a wonderful one—if we are willing to make it so by cooperating with the grace of God by loving him and our neighbour and seeking the common good.

That’s really all it takes: do justice, love mercy, walk humbly before your God. Do that, and the healing we all seek will come, because we will be sacraments of healing for the whole world. Be sacramental, not magical.

“Bad times, hard times, this is what people keep saying; but let us live well, and times shall be good. We are the times: Such as we are, such are the times.” – St Augustine of Hippo