Last week I was musing about how beige Catholicism has almost smothered us to death in Australia. Certainly, it’s hard to find evidence of salt and fire and light out there.

While we’re waiting for the Plenary Council to start again, let’s review the back story.

The Council kicked off in early 2019 with a series of listening sessions. The Catholic fringe groups began issuing manifestoes for ‘renewal’ on behalf of their tiny memberships (quite a few ex-priests and elderly ladies). Some articulate professional Catholics backed them up, fulfilling a lifelong dream to change the currently unpopular Church into a more socially acceptable one.

They asked for an even more beige Church which would upset absolutely no-one. This was modelled on failed and dwindling non-Catholic communities. This strange new Church was also to be run as a modern corporation with handsome salaries for an increased number of employees. This was modelled on the German Church’s ‘synodal way’, enormous tax-based income, and rapidly vanishing churchgoers.

But the listening sessions were something of a shock. The Final Report in July 2019 showed that at grassroots level, a lot of people didn’t agree with this agenda. They felt let down by Church leadership. They were disappointed, angry and frustrated at the lack of coherence in Catholic liturgy and teaching. They thought the Church wasn’t doing enough on critical life issues.

In May 2020, six Thematic Discernment Papers emerged which managed to minimise most of the grassroots concerns I’ve just listed. At the same time, we saw the wobbly first version of The Light from the Southern Cross, on reforming Church governance. This had to be hastily withdrawn and redrafted.

Then in our last cliff-hanger episode, the Instrumentum Laboris of February 2021 hauled the whole thing back on track, rescuing the process from the lunatic fringe. So what next? The forthcoming sessions have been asked to consider sixteen questions, which you can read on the Plenary Council website.

Some of the questions are sensible and may help to drive positive changes. Some of them have obviously been included to keep the lunatic fringe happy. But really, there’s only one question: How can we as individual Catholics be more holy? Jesus has already answered this for us. Holiness consists of being perfect, like Him. And we get there by true repentance – clearing everything out of our lives that comes between us and God.

This – and only this – prepares the way of the Lord. It’s long, it’s painful, and it requires sacrifice, and feeling weird and awkward, and not blending in. Unless we’re holy – unless God Himself is irradiating our lives more and more every day – we are useless to both the Church and the world. And you can’t be holy and live like a pagan at the same time.

This was the battle-cry of Vatican II. If the Plenary Council is serious about Vatican II, it needs to rediscover this core teaching of the Council.

So next week – why being different from the world really matters. 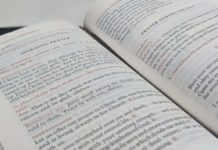