The word ‘person’ is mentioned 50 times in the Reproductive Health Care Reform Bill 2019.

Most striking are the utterances in Clause 5, perhaps the fundamental clause of the Bill:
“A person who is a medical practitioner may perform a termination on a person who is not more than 22 weeks pregnant.”

The irony that preborn persons are totally ostracised by this bill is evidently lost on Alex Greenwich and his 15 co-sponsors.

The decriminalisation of abortion, ipso facto, necessitates a revolution of personhood writ large. The bill is a hit-and-run job on personhood; totally blowing the concept to pieces and offering no apparent redefinition.

Such a glaring omission would be more obvious to those in the public square if personhood was seen as an integral piece of the ‘how should we legislate around abortion?’ machine. It should be – for it isn’t just any piece, but the fulcrum on which the entire debate turns – but lamentably, it isn’t.

To deny that human life is at stake when discussing abortion is to deny science.

On this point the jury is out: a zygote has DNA unique to both of his or her parents and is therefore a unique human being.

Science has also helped to dispel the ‘clump of cells’ argument with the use of 4D ultrasounds and discoveries of a beating heart as early as 16 days after fertilisation.

We are then left with a question that is philosophical in nature: are all human beings persons? This is what our politicians should be pondering deeply.

If preborn humans are persons it doesn’t matter how old current legislation is, how other countries, states and territories have recently legislated, or how accessible and affordable reproductive ‘health care’ is, because now you are dealing with two human persons.

Article 6 of the Universal Declaration of Human Rights says that everyone has the right to be recognised as a person before the law. The preamble uses equally clear language in declaring every human being as having “inherent dignity”. 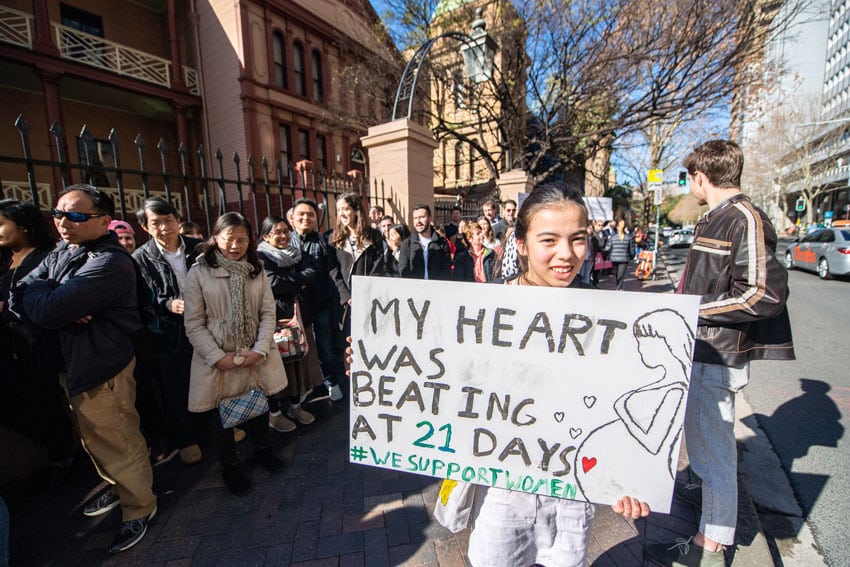 Therefore human rights, the first of which is the right to life, and consequently the right to be born, are “equal and inalienable”.

The Declaration is built on the sound and time-tested principle of Natural Law, which, when respected and upheld by legislators the world over, has always resulted in greater peace and prosperity.

The point is that a distinction is being drawn by pro-abortionists between human beings and human persons, where there should be none.

Were it up to me we would never use the term ‘human being’ at all, because none of us is just a being.

We are each so much more than a product of evolution who just happens to exist. Every individual is a uniquely complex phenomenon with seemingly infinite depth – born or preborn – and the term ‘person’ points toward this reality far more than its alternative.

If this bill is passed, we are in for institutionally endorsed eugenics, sexism, and racism.

Just because this eradication takes place in the silence of the womb does not make it any more dignified than the Nazi Euthanasia Program.

Marie Stopes, the patroness of New South Wales’s most lucrative abortion facilities and a self-proclaimed eugenicist who wrote love poems to Adolf Hitler, was even more extreme.

She forbade her son from getting married and having children because he wore glasses.

It’s no mistake that the abortion chain finds its biggest and busiest facilities in low socio-economic areas populated primarily by these ethnic groups.

“We do not want the word to go out that we want to exterminate the Negro population,” wrote Planned Parenthood founder Margaret Sanger, a racist eugenicist.

So who is in danger in contemporary Australia? Aboriginals? Asians? Anglos? Once one sub-category of persons has had it personhood annihilated, any other group can be up for grabs depending on how the State and the abortion industry decide to exercise their power.

Our voiceless and defenceless preborn sisters and brothers throughout NSW are begging for their personhood to be recognised during next week’s Parliamentary debate. If we are not as desperate as they, we too may be begging for the same thing soon.