Having served as a war-time correspondent, the American broadcaster Edward R. Murrow could declare in the face of the world’s complexity, “Anyone who isn’t confused doesn’t really understand the situation”. This sentiment came to mind more than once over the first three days of the Plenary Council, in listening to a range of diverse and many-sided contributions as one of the 20 theological advisors or ‘periti’ appointed ahead of this First Assembly.

While several themes that have been discussed are familiar from preparations for the Council, including from the Instrumentum Laboris, the personal testimonies and convictions shared over these days have brought into stark relief the common desires and sharp tensions that co-exist in the life of the Church. In the span of a few short hours it is not uncommon to hear the personal pain of young adults dislocated and afloat in their own Church, succinct theological reflections on marriage and family life, frustration on issues of leadership and governance and on the contribution of laity, particularly women, to the Church’s ministry and mission, and to learn from the rich insight and self-understanding of our First Nations people. The bricolage of the Church’s life in Australia looms large.

In the first session of the Council the example of St Mary of the Cross MacKillop was held up as an exemplar of the courage required of Catholic faith and of the pioneering spirit that has marked holiness in the Australian context. The desire for such boldness in the Church’s future was balanced by recognition of the repentance required, including for the harrowing history of child sexual abuse within the Church, if such a new chapter of mission for the Church is to be authentic and anchored in the Gospel rather than conceited or blind to its dependence on God.

Other wounds that were acknowledged by the delegates included the waning practice of faith among Catholics, many of whom no longer worship in our parishes on a regular basis, and the relational crises and other societal pressures impacting upon our families, parishes and school communities.

There was a concern that weakening identification with and commitment to the Catholic faith was a reality observable not only in Australian society – a trend that invites renewed approaches to outreach to the disengaged and the “nones” – but an experience of diminishment that is seeping into the life of the Church itself, reshaping its depth and unity.

So, observable in the opening interventions was recognition of the connection between the spiritual conversion of the Church, the quality of its life and ministries as experienced by its baptised members, and the strength and effectiveness of the Church’s witness and outreach to others. In short, holiness emerges as a language that the world can hear.

On the first day and carrying over into the second was the theme of leadership and in particular women’s participation in the Church, including in the task of governance. Some delegates claimed baptism as the basis of governance, pointing to the experience of ‘Ministerial Public Juridic Persons’ (MPJPs) as example. Others suggested women’s access to ordination as a priority for the Church while still others viewed this focus as a failure to recognise the many ways in which women express their baptismal faith and in complementarity with others within the Church, including religious and clergy.

In listening to these discussions, it became clear that governance can risk being viewed as an end in itself rather than being a subset of ‘authority’ in the Church of which there exist a number of expressions. From the perspective of faith, all authority originates in God’s own life and power, for God alone is the author (auctor) of life as well as the source of its flourishing. Thus, the exercise of authority is a share or participation in a relationship of influence, a ‘bringing to life’ or a charism to enable and animate within the Church that is not strictly our own.

This anchoring of authority in God’s life accounts for both the diverse forms in which authority finds expression and its character as service. Take for instance the ‘authority of holiness’ manifest in the communion of saints which reflects the creativity and abundance of God’s self-giving, mediated through human participants. Then, as the pontificate of Pope Francis has underscored in a particular way, there is the ‘authority of the poor’, the anawim who disclose the divine bidding to human solidarity, inclusion and communion precisely because they are the ones to whom it is always denied.

In the interests of perspective it can be noted that the charismatic authority manifested in the saints, can indeed – but does not necessarily – coincide with those who hold sacramental or ministerial authority within the Church. To this end, it can be observed that while St Birgitta of Sweden stands below her contemporary Pope Gregory XI in the suborder of office, she stands above him in the suborder of charismatic holiness. So, the manifestations and implications of ‘authority’ in our Church are multidimensional.

The ongoing discussions of Church governance, then, would do well to keep in view the varieties of ‘authorities’ which operate within the Church’s life, rather than reducing or tapering this holy and creative influence to the ‘power of jurisdiction,’ which is reserved by the Church to the ordained.

As we reach the midway point of this first assembly, the common appeals that have been heard for a more “Christ centred Church” and for a renewed “fidelity to Christ” are certainly encouraging. They are a reminder of the sincere faith and dedication that many still hold within this beleaguered Church, borne of personal commitment to Christ.

However, if such aspirations are to be realised then the challenge for Plenary Council members and the supporting steering committee in the days to come will be to translate the ideas and instincts raised in discussion into succinct outlines or proposals that might move the Church forward, or that at the very least might provide the Council and its future deliberations with a platform on which initiatives could be built with time.

From these opening inputs there seem to be some preliminary areas of ecclesial life for which proposals could be formed and tested. This includes the address of formation for the kind of discipleship we see embodied in the saints that have been recalled by the Council members, including the communal and personal accompaniment in holiness we see imaged in the apostolates of St Mary of the Cross MacKillop, the Servant of God Eileen O’Connor, and Caroline Chisholm for instance. The great schools of prayer in our Catholic tradition have also been highlighted by members as a resource for such ‘schools of holiness’.

The great schools of prayer in our Catholic tradition have also been highlighted by members as a resource for such ‘schools of holiness’. 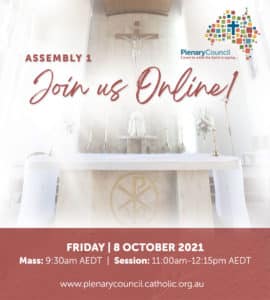 In light of the interventions and discussions, a new chapter for mission would seem to demand a strengthened ministry of healing through the grace of reconciliation, apostolates dedicated to this outreach and mercy, and revitalised faith communities which is one of those primary ways in which Christ is present to the baptised and brings healing and compassion to those in need.

In the call by a delegate speaking yesterday for the Church to reclaim its concern for the person over the expedient, I was powerfully reminded of that conversion to which the Church implores all of its members in all that it does: “Whether something is proposed for belief, for hope or for action, the love of our Lord must always be made accessible, so that anyone can see that all the works of perfect Christian virtue spring from love and have no other objective than to arrive at love” (CCC #25). It is this direct and simple love of God that must shape and infuse the Church’s missionary efforts if renewal is to transformative and lasting.

In the effort to better witness to the life of the Church as a communion, the stronger co-responsibility of the ordained and lay women and men in parishes and other ecclesial communities also arises as an opportunity to meet many of the concerns that have been raised by members to date. It is most often in the actual practice of mission, whether that be initiatives of evangelisation or formation or social outreach to those in need that the differing vocations, ministries and apostolates within the Church are revealed as complementary rather than in competition. It is an outreaching missionary Church that can appreciate God-given distinctions as something other than a cause of division and indeed as the makings of the body of Christ in its plenitude of gifts and ways of evangelisation.

In considering practical expressions of such co-responsibility, it will be helpful for members to differentiate between those initiatives that support the ‘leadership’ exercised by all the baptised – that ability to influence, serve and move people toward an embrace of Jesus’ Great Commission to make disciples and to the work of building God’s Kingdom – and the particular charism and function of ecclesial governance, to which all forms of authority and influence within the Church should not be reduced or collapsed, for women or men alike.

Strategies and structures for communicating the Gospel, most specifically the kerygma or the life and mysteries of the Risen Jesus, to those distant from the Church and the “nones” also arises as a pastoral priority springing from member feedback. There would seem to be a range of practical approaches that communities, agencies and Catholic organisations could take up in this respect, not only for those who have not heard the Gospel but to re-engage Catholics, near and far, to re-receive that Good News that is the perennial source of our life and mission.

Without change Church’s mission is at risk, Plenary reformers say