Oration will honour a wonderful, selfless, human being

Canberra-Goulburn Vicar-General Fr Tony Percy shares some reflections about his friend, Tim Fischer who was one of Australia’s most admired politicians.

Tim Fischer was a wonderful human being. I first met him as a young priest in Young, NSW. Those were the days of John Hewson’s Fightback package, which Paul Keating successfully savaged! At a civic gathering, I asked whether a GST was going to apply to school fees. Tim was clear in his rebuttal. Thus began a friendship.

He became Deputy Prime Minister in 1996. Nothing changed. He was busy, but always had time to chat. Later he married Judy Brewer, an intelligent and beautiful woman, who became a great soul-mate and they forged a wonderful, fruitful life together.

Tim had a great sense of humour and prodigious memory. He occasionally visited me when I was assistant priest at Queanbeyan parish in the late ’90s. The parish priest at the time, Father Michael Burke, held a Labor ticket. He informed Tim that he liked him, but that “he would have to fumigate the presbytery when he left!” When Tim visited later on, he enquired whether the purifying action had been carried out.

I was privileged to baptise their first son Harrison, whose faith in Christ has blossomed. When I travelled to the family home to say Mass and anoint Tim due to cancer, I was deeply moved by Harrison’s tangible faith. He had arranged and planned the Liturgy to the last detail.

In 2008, Sydney hosted World Youth Day. Then Prime Minister, Kevin Rudd, appointed Tim as Australia’s first ambassador to the Holy See. Tim called me, unsure if he was fit for such a position. Imagine!

Michael Tate, who was a minister in Keating’s government, told me that Tim also called him, asking if he thought such an ambassadorship was a full-time job. Michael said absolutely not! Tim didn’t ‘bat an eyelid.’ He went on to ask, ‘What should I not do when in Rome?’ Tate told me, ‘The perfect question.’

I was privileged to speak with Tim two days before he died in August 2019. He told me the cancer treatment was no longer working, that he would last until Christmas and that funeral arrangements were in place. Judy subsequently informed me that Tim had just emerged from a period of unconsciousness to phone me and that no one – yes, no one – had any clue that he was close to death. Such was Tim’s selflessness.

The day after Tim’s funeral, I was interviewed by ABC radio, who asked, ‘What is the legacy of Tim Fischer AC?’ ‘Young people can be assured that you can reach the height of your profession without compromising themselves,’ I answered.

He had the last word, of course, having the prologue proclaimed by John Anderson at his State funeral. The day after Tim’s funeral, I was interviewed by ABC radio, who asked, ‘What is the legacy of Tim Fischer AC?’ ‘Young people can be assured that you can reach the height of your profession without compromising themselves,’ I answered. Not to my surprise, he wanted to talk about the Gospel of John, which fascinated him. He would sometimes call me on Christmas day complaining that the priests never proclaimed the prologue of John’s Gospel at Christmas Masses, instead focusing on the Christmas story.

The Inaugural Tim Fischer Oration on Ethics in Public and Political Life will be held in the Great Hall, Parliament House, Canberra on 26 August 2021. Event starts at 6.30pm. Tickets $30: www.tfo.org.au 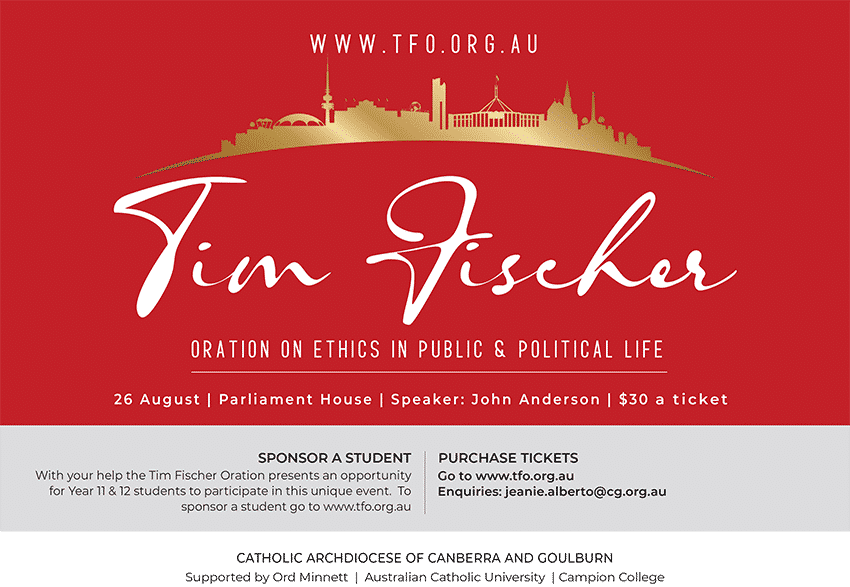