What Would John Paul II Have Said?

Forty-one years ago today, the cardinal archbishop of Cracow, Karol Wojtyła, was elected Bishop of Rome, the first Slavic pope ever and the first non-Italian pope in four hundred fifty-five years. He brought to the papacy an abundance of supernatural as well as natural gifts, and the two worked together to give him a uniquely prescient view of what Vatican II had called, in its Pastoral Constitution on the Church in the Modern World, the “signs of the times.” His analysis of those signs and his times was always the by-product of prayer. But it was also the result of the wide-ranging consultations he conducted, often over meals, throughout his pontificate. He knew what he didn’t know, and he eagerly sought the company of men and women – including many who were not clerics – to help him fill the gaps in his knowledge.

One of the tell-tale signs of the historical ignorance that distorts the view of younger Catholics of a traditionalist bent is their claim that John Paul II is, somehow, passé, old hat, yesterday’s news: that looking to his social doctrine for insight into 21st-century contentions is akin (as one recently put it) to those Republicans who think everything would be just fine if only Ronald Reagan, or at least his policies, were somehow reincarnated.

That is to due scant justice to the richness of John Paul II’s thought or its continuing salience. Of course the situation of the West today is not what it was in the decades immediately following the Cold War. But does that mean that the John Paul II template for thinking about social, cultural, economic, and political challenges is useless? That’s a rather queer view of “tradition” to come from self-identified traditionalists. John Paul’s insistence on the centrality of a vibrant public moral culture to the success of free politics and free economics – to the capacity of democracy and the market to contribute to genuine human flourishing – would seem even more salient in today’s contentious and self-destructive post-modern West than it did in 1991, when the Polish pope articulated a culture-first vision of the free and virtuous society of the post-Cold War future in the encyclical Centesimus Annus.

The same criticism is often leveled, and from the same quarters, at John Paul II’s vision of the Church of the twenty-first century, which, in the second half of his pontificate, he proposed under the banner of the “New Evangelization.” The modern roots of that vision go back to Pope Leo XIII (1878-1903), as I explain in my recently-published book, The Irony of Modern Catholic History: Counter-Reformation Catholicism had run its historical course, leaving great institutional expressions of Catholic faith throughout the West; but those institutions now had to be turned into launch-platforms for mission in the twenty-first century, because the ambient public culture no longer helped the Church and its people transmit the faith to future generations. And as Karol Wojtyla lived it and then interpreted it, the entire purpose of the Second Vatican Council was to prepare the Church for a new springtime of evangelization and missionary zeal in its twenty-first century and third millennium.

Getting Down to Amazonian Cases.

What does all this have to do with the Special Synod for Amazonia? A lot, I would suggest.

One of the most striking things about the Synod thus far has been its recycling of ideas from the 1970s, primarily in the form of liberation theologies of one sort or another, but now with an overlay of eco-theology that takes more cues from Greta Thunberg than from Karl Marx. This revamped and recycled liberationist perspective is as likely to prove evangelically sterile as its Marxist-inspired predecessors. Why? Because from an ecclesiological point of view, it turns the Church into another global non-governmental organization (NGO) whose primary purpose is environmental repair – much as the predecessors imagined the Church’s primary purpose as political advocacy, sometimes in the form of revolutionary violence. And if there is anything that the sad state of the Church in western Europe (and especially Germany) should have taught the world Church, it is that imagining Catholicism as an NGO is a sure prescription for empty pews on Sunday, a marked lack of evangelical zeal during the week, and empty seminaties and houses of formation for the consecrated life.

Eco-theology of a liberationist sort intersects at Synod-2019 with what can only be described as a kind of embarrassment at the history of evangelization in Latin America, which is often identified in one-to-one correspondence with colonialism’s least desirable features. No serious student of the history of Latin America doubts that the continent’s first evangelization had its rough edges. Were those rough edges materially worse, however, than some indigenous religions of the continent, with their practice of human sacrifice? Again, no serious student of these matters doubts that there were racist attitudes in play in that first evangelization. But where is there room in the Narrative of Embarrassment (dominated as it is by Western guilt and political correctness) for Our Lady of Guadalupe, whom John Paul II saw as perhaps the second millennium’s most powerful icon of a successful “inculturation” of the Gospel, what with her indigenous features and the native symbols on her mantle?

Moreover, if Latin America’s first evangelization is, in the main, something for which the Church should repent, what in that repentance is going to be the driver of the evangelization the Latin American bishops called for in 2007 in their Aparecida Document?

A Social Doctrine with Continuing Relevance.

Synod-2019 would also benefit from the empirical sensitivity that John Paul II displayed in his mature social doctrine, which is found in its most developed form in the aforementioned Centesimus Annus and the 2003 apostolic letter Ecclesia in Europa [The Church in Europe}, which is a kind of papal report card on the condition of the West, fourteen years after the Revolution of 1989 and the end of the Cold War.

In Centesimus Annus, whose title and text both make clear that it was written both to celebrate Leo XIII and to stretch his social doctrine into the twenty-first century, John Paul suggested that the wealth of nations in an increasingly post-industrial world lay, not so much in land or in stuff in the ground, but in the human imagination: in entrepreneurial instincts married to scientific and technical knowledge. The poor, he insisted, were not to be considered wards of the state, locked into one form or another of welfare dependency. Think of the poor, he insisted, as people with potential to be unleashed – people who should be empowered with the skills essential to joining the networks of productivity and exchange that help wealth grow throughout the world.

If these themes have been articulated at Synod-2019, I’ve missed them. Rather, there is a lot of talk about the evils of mineral extraction, the dangers to the environment of building hydroelectric dams and power plants, and the urgency of maintaining Things As They Are in the Amazonian rainforest. All of which is fine, I suppose: if you imagine that people living in what amount to Stone Age conditions deserve no better, want nothing better, and are capable of nothing better.

But that is simply a mirror image of the deprecatory view of indigenous peoples taken by the worst of the Spanish and Portuguese colonialists – a view stoutly resisted by the 16th-century Spanish Dominican Bartolomé de las Casas, whose defense of the native peoples of Latin America is one of the foundation stones of modern human rights law.

Other Signs of the Times.

Four years before his election as Bishop of Rome, Cardinal Karol Wojtyła was the Relator, or rapporteur, of the 1974 Synod of Bishops on evangelization. It was a contentious meeting that could agree on no final report (although its unhappy ending led to the great document of the last years of Pope St. Paul VI, the 1975 apostolic exhortation Evangelii Nuntiandi [Announcing the Gospel], another precursor of the New Evangelization). One of the reasons for Synod-1974’s inability to reach a consensus was the divide between bishops from western Europe and Latin America who saw in the liberation theologies of the day a path forward for the Church, and those who were either critical of liberation theology in se or who had a different ecclesial experience: what Wojtyła once described as the difference between those for whom Marxism was “a fascinating abstraction” and those for whom it was an “everyday reality.”

Something similar seems to be afoot at Synod-2019, in that a lot of the ideas  dominating the Synod’s first ten days seem to have been exported from western Europe – including an almost apocalyptic concern for “Mother/Sister Earth,” a deprecation of extractive industries and other forms of economic development, a celebration of indigenous religiosity, and a consequent squeamishness about proposing Jesus Christ as Lord and Redeemer. And it seems that a lot of the money behind the pre-Synod agitations in support of those ideological agendas (and the various Off-Broadway activism at Synod-2019) is coming from wealthy western NGOs, often using taxpaper money, but rather removed from the on-site experience of life in the complex region known as Amazonia. A new form of colonialism, perhaps? Another distraction from the Church’s primary task of evangeliation?

What would John Paul II have said about those signs of the times?

He would have suggested that they be read very, very carefully indeed, “lest the Cross of Christ be deprived of its power” [1 Corinthians 1.17]. – George Weigel 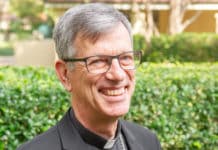 10 reasons you should visit your church today

The ‘saints next door’ who are in our midst

Our Lady: Mother and Disciple of the Church

Our Lady: Mother and Disciple of the Church