There’s a three-year-old boy sitting on the floor of a dimly-lit classroom who’s trying to make – how should I put this – ‘farty’ noises in the direction of his friend.

For a short while, his co-conspirator – another boy – attempts to return fire. Giggling ensues, but then Angela Hague, a catechist in the Catechesis of the Good Shepherd steps in with some firm but kindly instruction.

With all five children in this Chatswood-based group now settled, something rather wonderful begins to happen.

The children are looking intently at Angela as she speaks to them about the coming of Jesus at Easter.

And now they are staring at the large paschal candle in front of them – close enough to touch – its flame flickering light on their faces as Angela explains the candle’s meaning and symbolism, an explanation interspersed with light and lively songs.

It’s a simple teaching, but Angela doesn’t hold back. There’s no gore, but there’s no sense that the story is being dumbed-down to the point of incoherence or silliness either.

Angela is talking about Jesus in a matter-of-fact way that many practising Catholic adults in Australia would struggle to get out.

And the children seem to know that there is something significant about what she is saying.

“Receive the light of Christ,” she says as she passes each child a tea candle – a little light of their own.

Some more singing follows, the aforementioned goofing around now nowhere to be seen.

And here another unique aspect of the Catechesis of the Good Shepherd method comes to the fore.

The children break apart to spend time alone with God at separate ‘workstations,’ for want of a better word, to contemplate what they have just heard.

(The Good Shepherd catechesis is predicated on the belief that the child and God are already in relationship, and that it is the job of parents and catechists to help nurture and grow it.)

The weekly sessions and the set-up of the room itself are referred to as an ‘Atrium,’ a reference to the porticos of early basilicas where the catechumens – people who wanted to embrace the faith – would come to be ‘formed’ or prepared for entry into the Church.

The children snuff their candles and repair to their ‘work’.

One boy has chosen to spend his alone time at a workstation set up as a replica sanctuary, complete with altar, ambo and tabernacle. Another child is arranging flowers, while another expresses a desire to draw something of what he has just seen and heard, and that’s what he has now gone off to do. 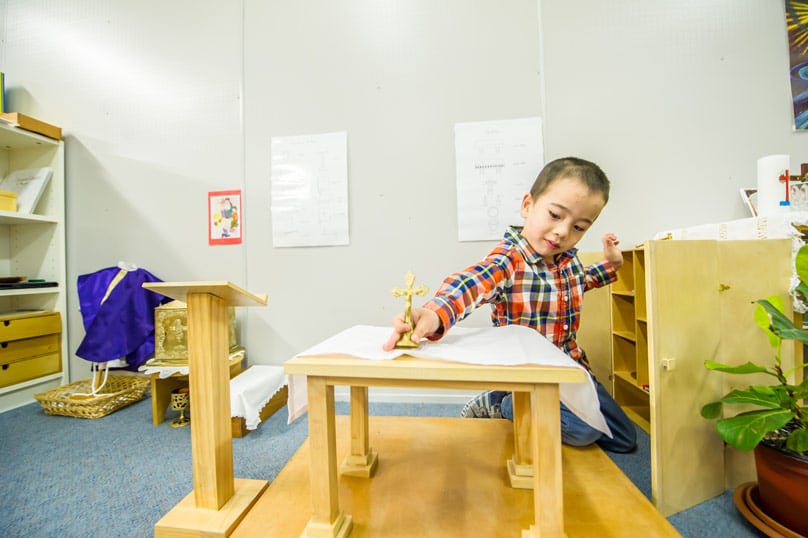 Around 60 children attend one of four ‘Atrium’ sessions each week at Our Lady of Dolours Parish in Chatswood, as categorised by age – 3-6, 6-9 or 9-12 – the content and emphasis changing as the child gets older and progresses.

“I’m not the teacher in that room,” Angela tells me.

“The Holy Spirit is the teacher in that room. My role as a catechist is to serve by announcing the Kerygma (the Good News of God’s love) and then stepping back and allowing God and the child to enter their own conversation.”

She says she knows it might sound weird, even to religious people who try to have an intimate relationship with God.

That’s the way it sounded to her 15 years ago when she first heard about the program at an information evening at Riverview College, her eldest child being in kindergarten at the time.

“I grew up as Catholic but in a non-practising family,” Angela says.

“But as an adult, I had a close relationship with God. And I wanted my children to have that, too.

“So I attended the information evening and I saw a miniature altar and all this hands on stuff and thought, ‘It doesn’t look like it’s going to do it for me.’

But when the thinking behind Good Shepherd was explained by a catechist from Brisbane – the first city in Australia to embrace the program – something seemed to click.

Its grounding in the liturgy and Scripture – teaching children the meaning of what they see and hear at church each week – and its relationship to the children’s bodily senses through tactile experience turns out to be an extremely effective method of formation, she says.

Its foundation in the teaching methods of Italian education pioneer Maria Montessori – putting faith in the child, not only in their capacity to develop at their own pace, but in understanding that children have a natural religious affinity – is a major part of its success.

After several years of training, Angela has been working as a catechist for the Catechesis of the Good Shepherd in Sydney since 2006. What has she learnt in that time?

“I have learnt that to be childlike in your faith is not to be childish. What the child brings to their faith, which we tend to overlook, is joy. And joy is the heart of what God wants; He wants us to enjoy His love for us.

“The child lives that so well. They are metaphysical: they can easily switch between the spiritual and the natural world; it’s all the same to them, whereas we tend to compartmentalise.

“To the child, it’s all part of their life. And they are joyful and happy. It’s really that simple – simple and profound.”

The children come from all over Sydney, with some families facing more than an hour’s commute through the city’s heaving and congested streets to get here.

Parents Bernadette and David Jee say that what they want for their children is the same thing the Catechesis attempts to facilitate: that their children develop their own relationships with God as nurtured through His Church.

The couple’s six children, aged three to 13, have all attended the Atrium.

“I suppose we are the lost generation in the Church,” Bernadette says.

“We grew up with experiential learning (teaching that emphasised one’s immediate context and action as gateways to an amorphous divine). We wanted something different for our children.”

At Mass, the kids are still kids, David says – laughing – and the littlest ones do “get a little bit distracted”.

“But now we are able to point and ask, ‘Look, what’s the priest doing now?’ It’s a really special time.”

Bernadette says it’s particularly startling when your own child starts explaining something like the epiclesis to you – the moment during the Mass when the priest calls upon the Holy Spirit to bless the people’s offering.

“We’ve wondered, ‘What is going to be the fruit of our burning down the highways, battling Sydney traffic; why do we bother? Why am I bothering with this?’

“But it’s changed everything to do with the faith (in our home). It’s also affected how we pray with our children. And the children are so inquisitive, and I love that.”

The parents and catechists are excited about the upcoming visit of Rebekah Rojcewicz from the United States, a veteran figure in the Catechesis of the Good Shepherd.

An American with Italian heritage, Rebekah trained with the two women who built on the work of Maria Montessori to create the program in Rome, beginning in 1954: the Hebrew and Scripture scholar, Sofia Cavalletti, and the Montessori educator, Gianna Gobbi.

Local catechists are inviting parents, educators, priests – anyone who cares about the most effective ways to share the faith with children – to come along to a special Keynote Dinner on 30 June in North Ryde where Rebekah will be speaking (visit www.facebook.com/cgssydney for more details).

Angela says she hopes the Church in Sydney will offer genuine opportunities for children who have been formed in the Catechesis of the Good Shepherd to contribute.

“The thing that I find with the children who come through this – from three to 12 – by the time they leave, they’re ready for ministry. Unfortunately, I don’t know if we’re ready to embrace that as a Church. We see them as children – and they are, and they still need protection – but it’d be nice to be able to give them ministries so that they can begin to serve.”

Back in the Atrium, the session is finishing up. The children have been brought together to complete the experience by offering their own prayers.

And what prayers they are: prayers for sharks; prayers for mothers; and prayers “for people who make cars”.

Tickets for the Keynote Dinner with Rebekah Rojcewicz are available at www.trybooking.com/OPOT

More information about the Catechesis of the Good Shepherd in Australia is available at their website – cgsaust.org.au – and on Facebook.

Further information about the Catechesis in Sydney is available at www.facebook.com/cgssydney