Brendan Davis’ love of both rugby league and his young students has earned him the title of NRL National Teacher of the Year.

The passionate educator from Bondi’s Galilee Catholic Primary School in North Bondi has beaten hundreds of teachers from around the country to take out the coveted title.

The prestigious award is given to a teacher who has demonstrated exceptional support of rugby league through opportunities in practical activities as well as by engaging students through the integration of NRL’s educational programs in the classroom.

And Brendan has certainly used the fundamentals of the sport in all aspects of his teaching. He uses full-time scores to teach maths, the origin of a player in geography and match reports to teach English which he says makes learning not only relatable but a lot of fun.

However he said while teaching the basics of the game to his students was important, it’s the core values of unity, inclusion, resilience, hard work and team work which are so important both on and off the field.

“Being around footy my whole life due to my old man playing for South Sydney obviously has given me a real love for the game but it’s since I’ve been a teacher that I’ve seen how much the kids – girls and boys equally – benefit from the basics of the game in their everyday life,” he said.

“It teaches you about teamwork, resilience, looking out for one another, and that Aussie mateship that really resonates in all of us.

“It doesn’t matter if you win or you lose it’s about having fun and having a go which applies not only on the field but in life.

“With kids spending so much of their time on their devices these days, I feel it’s my duty as a teacher to get the kids outside, being active and taking part in life.”

Brendan, who is also the school’s sport co-ordinator, spends countless hours of his own time organising extra-curricular activities, sporting events and a touch football competition which attracts more than 2000 youngsters from across Sydney.

He said the award makes up for all the times he misses out on being with his family, friends and in particular his new wife.

“There are only so many hours in a day but I choose to make the time to organise stuff for the kids,” he said.

“I recently completed my Master’s and would constantly find myself divided between completing a 2000-word essay or devising a footy draw that would benefit 2000 kids. And yes, the kids always get my attention first.

“This award is not just for me but for my wife, my friends and family who have been so understanding when I have missed something because I’m doing stuff at school.”

Galilee assistant principal Brad Cummins said the school community was extremely fortunate to have such a passionate and positive role model in its ranks.

He said the school had seen a real change in the students since Brendan began placing such an emphasis on sport. 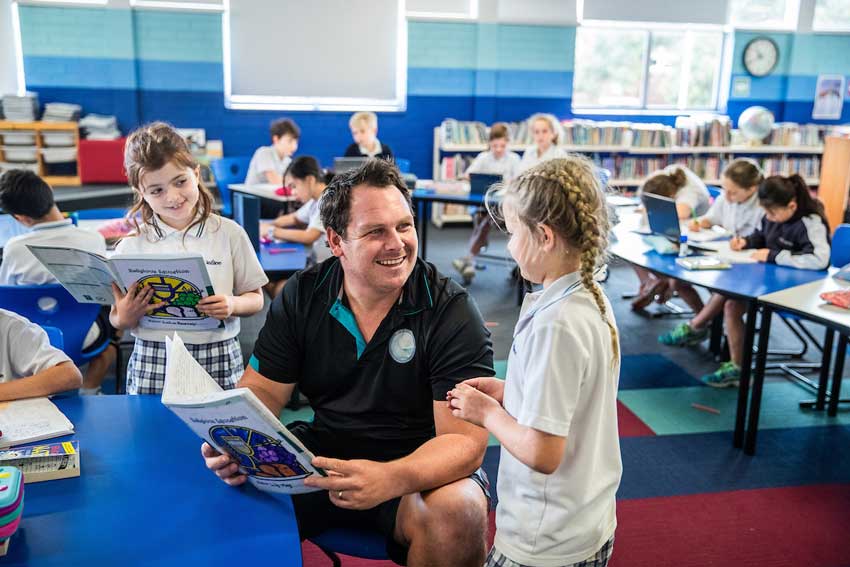 “We are so lucky to have a teacher like Brendan who goes above and beyond with everything he does,” he said.

“He spends countless hours on the kids that often does go unrecognised. Obviously he has a real love of sport, but he is also a Year 3 teacher as well and fits everything in with a smile on his face and unbridled enthusiasm.

“A male teacher in a primary school is relatively rare these days so to have someone like Brendan is an absolute blessing.”

The National Rugby League Community Awards were introduced more than 10 years ago to honour the game’s unsung heroes and to ensure they receive the recognition they deserve for the work they do in the community.

NRL chairman Todd Greenberg said it was an absolute honour to present Brendan with his award as such a worthy recipient.