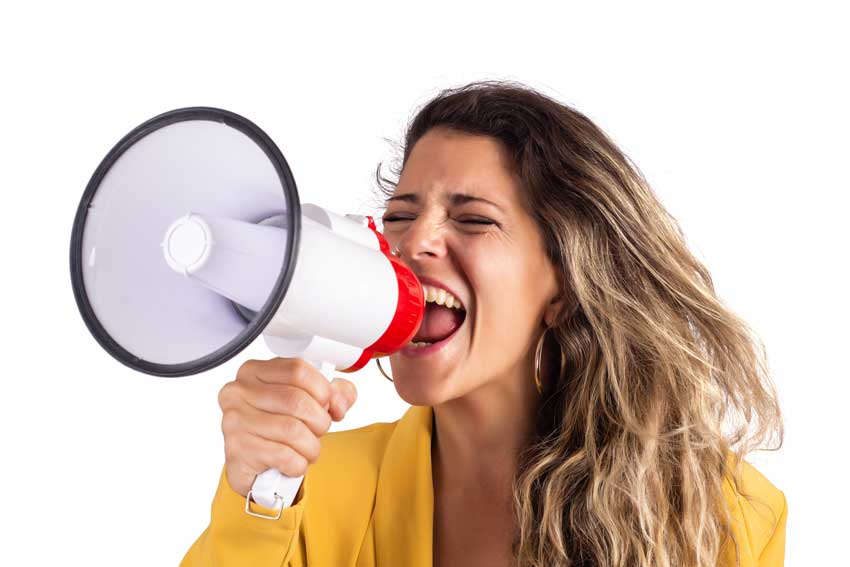 We have to speak up against evil, don’t we?

Recently at Mass, we heard the opening words of the first reading, “You duped me, o Lord, and I let myself be duped.” I thought to myself,  “Oh, hold onto your butts!” Because I knew what was coming next. Here’s the full reading:

“You duped me, O LORD, and I let myself be duped;
you were too strong for me, and you triumphed.
All the day I am an object of laughter;
everyone mocks me.

“Whenever I speak, I must cry out,
violence and outrage is my message;
the word of the LORD has brought me
derision and reproach all the day.

“I say to myself, I will not mention him,
I will speak in his name no more.
But then it becomes like fire burning in my heart,
imprisoned in my bones;
I grow weary holding it in, I cannot endure it.”

Eh? Eh? Who doesn’t go around feeling like “I must cry out; violence and outrage is my message” these days? Like the bumper sticker says, “If you’re not outraged, you’re not paying attention.”

Even more, you get to feeling like if you’re not shouting about what you’re outraged about, you’re part of the problem. There is so much to be upset about, and there are so many people hell bent on pretending everything is fine, or else pretending that the real problem is something else entirely. They believe and insist on facts that are sheer lies; they defend and applaud things that are sheer evil. Sometimes you feel that you have no choice: You really must speak up, so at least one person is telling the truth.

And unless you’ve entirely sealed yourself off into a bubble, you’re probably also very familiar with that feeling of being mocked, derided, attacked, just for telling the truth. Some people have been ostracised by their families for standing their moral ground. Some people have been made miserable at their jobs.

Some people have had to endure an endless string of nastiness from strangers on social media, which doesn’t sound like a big deal, but when it’s happening to you, and it goes on and on and on, it really can be a big deal. All you were doing was telling the truth, and now you’re suffering for it.

Little wonder the Old Testament passage hit so hard this time around. So many of us feel like prophets, begging people to listen, crying out against foolishness and lies, and reeling under the blows and buffets of a mob that doesn’t want to hear the very thing they need to know.

How to tell if you’re a real prophet

Now here is what I am going to ask:

Do you kind of dig that feeling? Do you get a little bit of a tingle out of feeling like the wild-eyed oracle who’s boldly proclaiming the unpopular truth? Does it give you a bit of a buzz to get blocked by someone after you righteously handed them their ass in a political argument? Does your brain light up when you find yourself all alone in a crowd of fools?

If so, you’re not a real prophet. That’s not what it’s about.

Most of the prophets in the Old Testament were reluctant, to say the least. The last thing they wanted to do was stick their necks out and speak truth to power. They only did it because God gave them no other choice, and when they did it, a lot of them got killed for it, so that was the end of their career. Jeremiah, who’s speaking in the passage above, is no exception. That’s why he says:

“I say to myself, I will not mention him,
I will speak in his name no more.
But then it becomes like fire burning in my heart,
imprisoned in my bones;
I grow weary holding it in, I cannot endure it.”

He gets no kick out of this life. He definitely doesn’t think well of himself for being the one to say the hard things. He doesn’t go talking about how he has been elected by God. He speaks instead of how insistent and irresistible is the word of God inside him, and (depending on the translation) he feels anywhere from annoyed to enraged at the Lord for making him the mouthpiece for God’s awful truths. And that’s apparently what it actually feels like to be a prophet: It feels like you’d rather be anything else, be anywhere else, be anyone else, but not that.

“Is it the irrepressible word of God welling up in me? Or is it just, you know, irritation?”

One thing I have learned is that the mere fact that people are annoyed is not a good enough reason to believe you’re in the right. And even when you are indisputably in the right, that still doesn’t mean you’re brave and good for having said what you said.

What I’m asking myself these days, more and more, is this: What is it, exactly, that is burning in my heart? What, precisely, is imprisoned in my bones, wanting to get out?

Is it irresistible truth? Is it the irrepressible word of God welling up in me? Or is it just, you know, irritation? Or something worse — something like masochism, a weird, wretched pleasure of playing the part of the punching bag? Humans are strange. We can derive enjoyment from all sorts of things that have no real goodness in them. It’s something to keep an eye on.

So if you have found yourself in the position of the unpopular prophet, whether on social media, or in your family or workplace, or just in conversation, you might ask yourself: Am I actually trying to change anyone’s mind? If I did persuade someone to think and act differently, would I be truly glad, and lay my megaphone down? What if I failed to achieve my goals, but someone else saying the same thing succeeded? Would I be glad then? Or would I feel a little shadow of disappointment, because the truth was all very well and good, but the real point was me being the truth-teller? Lonely, courageous, astonishing Me?

Just questions to ask. Questions I ask myself.

I suspect that some people will read this and think I’m saying to be quiet, and then they’ll drag out poor old Catherine of Siena and her thousand tongues. But that’s not what I’m saying. I’m not telling anyone to keep quiet, to let evil triumph, to allow lies to go unchallenged, or anything of the kind. You go and say what you need to say. You go, girl. Go right ahead.

But remember that, if you’re speaking the word of God, it really does need to be about God, and not about you. Because if you’re in the habit of speaking up, but it’s not the word of God burning in your bones, then you will find yourself chasing anything that burns.