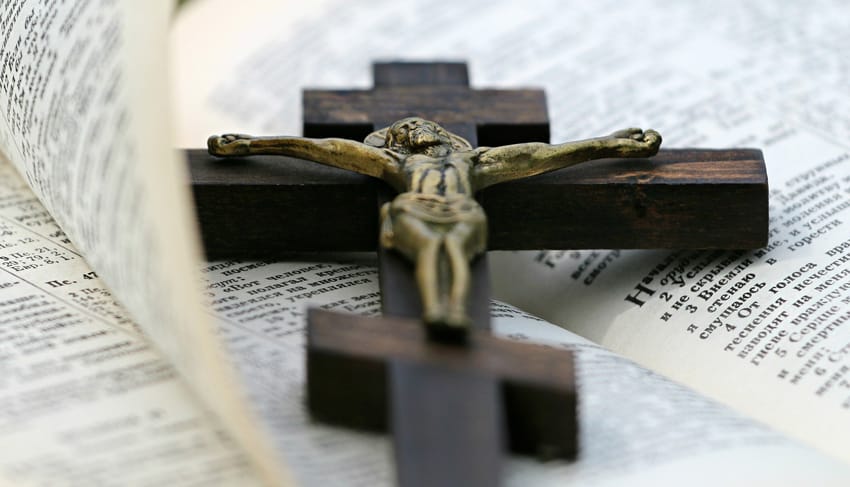 When I used to teach catechism, with a loud and hopping little class of eight- and nine-year-olds, most of them were more or less willing to learn how to repent of their little sins.

“Let me see your best sign of the cross,” I would call out in my best teacher voice, with one eye fixed on those two boys who would make the most trouble. “Let’s start the class off right,” I would say. And we would cross ourselves: up, down, left, right, amen, begin.

One of the things I told them about was Miguel Pro. Here was a guy who was so joyful, full of tricks and jokes and trouble, but he was really ready to serve, and things got serious very quickly. He had to sneak around to be a priest, and he soon got arrested for it, and you know the rest.

You know the famous photo, which I decided to show my class: There he stands before the firing squad with his arms out, making a cross with his body. That’s what he decided to do with his life: Make a cross.

“They knew that Jesus was on the cross, and they saw that, when they made the cross on themselves, they were right there, with Jesus.”

I told the kids that, when they were baptised, they were marked with a cross, sealed, signed. “You know how pirates do,” I said. (Things pop out of your mouth when you’re in front of a group of kids).

“You know how, when they bury their treasure, they mark the spot so they can come back for it? How do they mark it?”

They all knew it was with an X. “Well, God marks his treasure with a cross,” I said. “That’s where his treasure is: That’s the spot that he wants to come back to. That’s the thing that he cares about: Right in the middle of the cross.”

And they believed me. They knew that Jesus was on the cross, and they saw that, when they made the cross on themselves, they were right there, with Jesus.

Plain as day. I thought about having them stand and make a cross with their bodies like Miguel Pro about to be shot full of holes, but we settled for making a sign on ourselves, marking the spot where God’s treasure is.

I know this is too much for little children.

Who is this not too much for?

I’m thinking of Peter, Peter himself, the rock, arguing with Jesus that he should try and get out of suffering and dying, then denying he even knows the guy, then swinging wildly at people’s heads with his sword to defend him, then in his final wretchedly agonic act, begging to be crucified upside down because when he got a good look at the thing, he decided he wasn’t good enough to be on Jesus’ cross.

Right, left, down, up, good grief. It’s too much. But where else is there to be? Here I am, stuck in the middle with Jesus.

“It’s something to shout about in triumph, and also something they will probably someday run from in terror, once they get a good look at it. I do.”

I used to worry, while I taught: How will these little children reconcile everything I am telling them? How will they understand that it’s all the same cross?

This weird little thing I told them about pirates, and the scary picture of the martyr, and the dusty brass crucifix on the classroom wall, and that one funny kid who always whips through the sign of the cross as fast as he can because it makes the other kids giggle, no matter what I say.

The sign that marks them as a spot so precious that God will climb up there and die for them.

It’s something to shout about in triumph, and also something they will probably someday run from in terror, once they get a good look at it. I do. I’m running right now. Right now my cross is that I feel useless, and I feel like a jackass making that mark on myself, reminding God that I’m his little bitty treasure, and won’t he please come back for me?

I recall that sometimes, while I taught, the cross was just showing up. Some classes were terrible, chaotic, pointless, but I had to show up and try. And I did try. I really couldn’t fault the material, anyway. At least I always knew where to start: Up, down, left, right, amen. Begin. Viva. Begin.