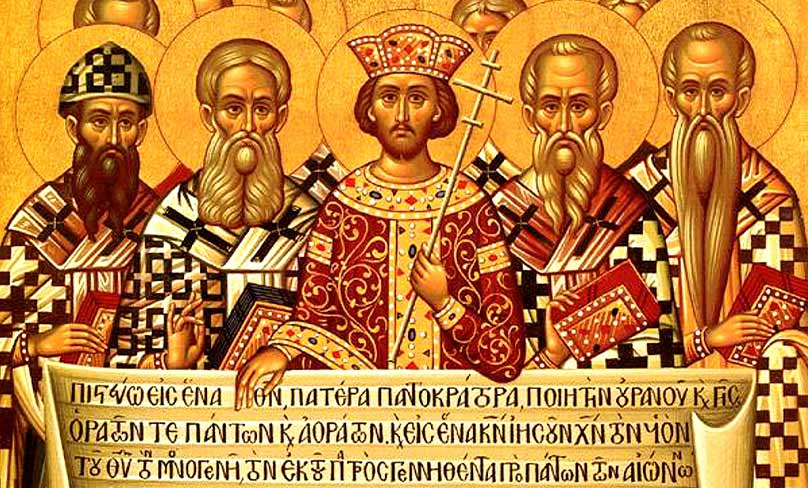 Some weeks ago, I wrote on the question of whether, as an Episcopal priest asserted, the creed disrupts our flow of worship.

It sounded pretty good while I was writing it, and I did a little preening about my ability to sustain a metaphor. Yeah, I preen. What of it?

Anyway, in the weeks that followed, as I stood at Mass and recited the creed, I asked myself if what I had said was really accurate. I said:

“very often, what I call ‘worship’ is a directionless wash of deferred obligations and guilt, empty gestures and fulsome excuses, feeble efforts and purposeless thrashing around, with a little bit of hasty prayer floating arounMaasaid like foam. Yes, even during Mass. Sometimes I can blame the kids for distracting me, but sometimes I do a great job of distracting myself during my one puny weekly hour of “worship.” Does it have a flow? Well, it’s not necessarily stagnant, but that doesn’t mean it’s going anywhere in particular. Half the time, I honestly think I’m worshipping God, but what I’m really thinking about is myself. Half the time, that’s who I’m really worshipping.”

And then I claimed that sometimes, like a rock in the middle of a swirling, directionless stream, the creed brings me up short.

You know what, maybe it does, maybe it doesn’t. Maybe what I really meant to say is that it should, or it might, if I gave it half a chance. Maybe the creed can be patient a little bit longer until I get my act together.

The truth is, no matter how much we believe what we recite at Mass, it’s rare that the old, familiar words stand out as fresh and powerful.

It’s all too easy to let habit and familiarity take over, and to stop hearing what they have to say. We don’t even realize we’ve stopped listening; our brains just say, “Oh, this old thing again” and check out.

Sometimes the best way to deal with this is to deliberately, firmly take your attention in hand and direct it toward the old, familiar thing.

Whatever else you can say about Catholics, you can’t accuse us of despising something just because it’s old! The words of the Mass are very rich, and if we’re open to it, we can often perceive something brand new, or newly exciting, springing up from that ancient soil.

But it’s also legitimate to strive to hear that same old, ancient thing in a slightly new way, to remind you how confounding it really is. This is what happened to me the other day, when I stumbled across the Maasai Creed.

As the name suggests, it was written by and for the African Maasai people, with a group known as the Congregation of the Holy Spirit in 1960. It is essentially the same as the one that we recite every week . . . and yet just different enough that it knocked me flat.

I believe I’m going to print it out and hang it in my house, so the kids can see it, too, because even in their tender youth, they’re probably already allowing repetition to dull their ears when we say the creed.

Our relationship with God shouldn’t require constant thrills and novelties. He values fidelity through the dull valleys of our faith.

But when He does put something fresh and interesting in our paths, it behooves us to stop and enjoy it! Here is the Maasai Creed:

We believe in the one High God of love who created the beautiful world and everything good in it.

We have known this God in darkness, and we now know God in the light. God promised in his book the Bible that he would save the world and all the nations and tribes.

We believe that God made good on his promise by sending his son, Jesus Christ, a man by the flesh, a Jew by tribe, born poor in a little village, who left his home and was always on safari, doing good, curing people by the power of God, teaching about God and man, showing that the meaning of religion is love.

He was rejected by his people, tortured and nailed hands and feet to a cross, and died. He lay buried in the grave, but the hyenas did not touch him, and on the third day he rose from the grave. He ascended to the skies. He is lord.

We believe that all our sins are forgiven through him. All who have faith in him must be sorry about their sins, be baptized in the Holy Spirit of God, live by the rules of love and share the bread together, to announce the good news to others until Jesus comes again.

We are waiting for him. He is alive. He lives. This we believe. Amen.