As a matter of grave concern, there seems to be little continuity between the various documents produced by the Plenary Council. The Instrumentum Laboris (IL) has been hardly mentioned since its publication. It rightly identifies the problems of proposals that are contrary to the established, permanent and infallible teaching of the magisterium of the Catholic Church.

These principles are clearly enunciated in the documents of the Second Vatican Council. Yet the subsequent Plenary Council documents persist in presenting proposals that are blatantly contrary to Catholic faith, justified by the throw-away line “everything is on the table”. Do we no longer believe in Vatican II?

The “fruits” document, whilst containing some proposals that are problematic, nonetheless did indeed contain many positive suggestions. Yet there seems to be a superficial relationship at best between the “fruits” document and the “Towards the Second Assembly” document.

For example, section C4, “Catholic Education” appear to be written by writers who have decided to write down what they wanted to, rather than building on the work of the small group sessions, and their approved minutes, from the First Assembly.

I was a member of this small group, and whilst the “fruits” document captured many of the things we discussed, I recognise very little within section C4 as bearing relationship to what we actually discussed and the concrete proposals we as a group put forward. That is, it appears that our concrete proposals have been ignored.

If this is reflected across the other focus areas, then the members of the Plenary Council could only come to the conclusion that this process is not at all synodal or collaborative, but is instead a process of manipulation to a preconceived notion held by a few powerful people controlling the writing process. One can only judge based on the evidence that is available.

I am concerned by proposal B3.3, which attempts to link the ministries of lector, acolyte, and catechist to that of the Diaconate. There appears to be a complete ignorance, or perhaps it is just being ignored, of the Catholic theology of Holy Order. This proposal appears to be based on presuppositions, or at least assumptions, that are simply false.

As Lumen Gentium n. 10 makes clear, the participation of the common ministry of all the baptised and the ordained differs in essence. As Pope John Paul II infallibly made clear, the Catholic Church cannot even consider the ordination of women to the presbyterate, fundamentally because of what we believe about the Sacrament of Holy Orders.

As the Catholic Church is built upon this Sacrament, without which there is no Eucharist and no Church, to change what we believe about the Sacrament of Holy Orders is to say that we now believe we know better than the lord and master of the Eucharist and the Priesthood, Jesus Christ.

I also find it odd that despite the various selective quoting of recent “supportive” documents, no-one has mentioned that the Code of Canon Law has just been changed such that anyone who purports to ordain a female to any order (including Deacon) is automatically excommunicated from the Catholic Church.

So why are we talking about something that the Church feels so strong about so as to have stated to do this is amongst the most serious breaches of communion possible? Furthermore, why are we continuing to raise matters that contradict the established and infallible teaching of the Catholic Church despite the Instrumentum Laboris identifying this a problematic?

I am concerned with proposal D1.3 which addresses liturgical translations, concluding by noting the “needs of clear and inclusive language.”

Whilst in the mind of the writer, there may well be a need, such a universal blanket statement is however based upon presuppositions that are clearly false.

Firstly, the proposal appears to ignore Liturgiam Authenticam (especially n. 30 & 31), the current official document of the Church guiding the principles of the translation of liturgical texts.

Secondly, the proposal ignores the realities of Catholic human anthropology. (The field in which I wrote my masters dissertation). Gendered language is a part of human anthropology. It is fundamental to a full understanding of what the human being is. “Mankind” – a word hated by the offenderati, is a fundamentally anthropological term that points directly to the Genesis account, our creation by God, and his promise of redemption when our first human parents fell.

Thirdly, the proposal ignores the realities of the English language, where a gendered word does not necessarily refer to a subject of the same gender. This is common in other languages too. For example, Brethren (another one hated by the offenderati) is a direct translation of fratres, from which we get the English word fraternity.

I would love to discuss this with the experts you have consulted prior to writing this submission. As the documents of the church state, liturgical language is called to be different to the language of the street.

Not only that, it is to be received. We do not reconstruct the language of the Church, the very conversation between Jesus and his Bride, because we seek to impose secular ideologies upon it. To change the language that we use in this most intimate of conversations is to change what we believe. Lex Orandi, Lex Credendi!

The justification often given for inclusive language is that some people are offended, therefore we must change the language. I would suggest however, that there would likewise be many who would be offended at the change of the sacred liturgy for such a secular reason. I would suggest that many people who have studied the nuances of the English language and liturgical language will be offended at such a poorly reasoned change.

Will our offence be paid attention to, or are only certain kinds of offended people listened to? So called inclusive language doesn’t actually include everyone at all. It just excludes different people in another way.

As alluded to in Liturgiam Authenticam, the so-called “problem” of “inclusive” language cannot be solved by changing the language, but instead requires proper catechesis and education in the way that the English language works.

Fr Stephen Hill is a priest of the Personal Ordinariate of Our Lady of the Southern Cross. 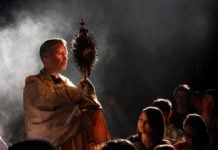 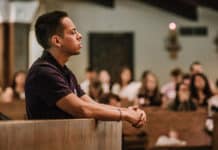