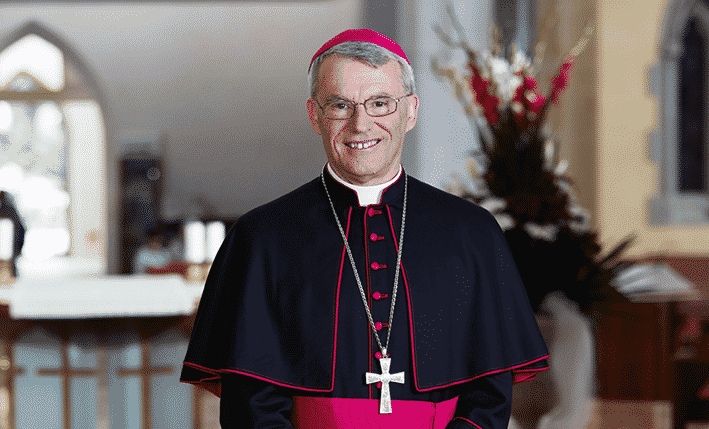 I am usually the first person to criticise bishops. I don’t make a secret of it; it’s practically a hobby. I know they have a hard job, but they have extraordinary graces given to them to help them do it.

They also have to lie on the floor when they’re being consecrated – as with their ordination as a deacon, and later as a priest – to remind them that they are going to be walked all over by a lot of people in future.

Archbishops wear the pallium – the black and white woollen stole bestowed on them by the Holy Father as a sign of their authority derived from the Holy See. I’ve always been struck by how much like a noose it looks, and how it reminds me of John 21:18 – being girded and led where you would rather not go.

I was reminded of this all over again by Archbishop Timothy Costelloe’s forceful and very timely Pastoral Letter to the people of his archdiocese of Perth this week on the seal of the confessional and proposed mandatory reporting laws.

I also read his response to the Honourable Simone McGurk MLA and her use of parliamentary privilege to try to force compliance from the local Catholic Church by shaming us with references to the Pell case.

Archbishop Costelloe’s response to Ms McGurk – which I suggest you also read – was courteous, but also more in sorrow than in anger that a government minister should be so ignorant of the local Catholic Church and its safeguarding program. He also rightly pointed out that McGurk is stuck in a time warp, fighting the big bad Church of 40 years ago.

That Church has gone, and good riddance. It’s now far smaller in numbers, far more humbled, and far more determined to rebuild in spiritual stones, not bricks and mortar.

But the real corker was his Pastoral Letter. I will be honest; I have rather dreaded pastoral letters in the past because it always seemed to take whichever bishop was writing ages to get to the point, and then it would end just when it got interesting.

But here Archbishop Costelloe explains he’s going to take a while because this is complex – and then proceeds to give a first-rate catechesis on the Sacrament of Penance, the like of which has not been heard in most Catholic churches or schools in Australia for decades.

Straight to the point

Anyone who’s taken a child through formal sacramental preparation will know that it mostly consists of colouring in pictures of Jesus on a donkey and making sure the kids feel safe and not too bad about themselves. That’s fine, but it misses most of the point of the sacrament.

There are so many good bits in the Pastoral Letter, but I will give you the bits that made me – yes, hard-hearted old me – tear up:

“The absolute freedom of people to access the Sacrament of Reconciliation to seek divine forgiveness of sins which have cut them off from God, calling into question their eternal salvation, is quite literally for Catholics a matter of life and death.”

You’re not likely to hear that in your average sacramental preparation class, and that’s a crying shame. Or from those writer-priests, usually American and well-fed, who make fun of frequent confessors and sometimes disclose in general terms what they’ve been told in order to make fun of them more hurtfully.

Confession: a personal ecounter with God

Then there was this bit: “The Sacrament of Penance (Reconciliation, Confession) is a personal and intimate encounter between God and the individual penitent, which is mediated by the priest in his sacramental identity as one who acts ‘in the person of Jesus Christ’ … an encounter with God, the depths of which we have perhaps hardly begun to appreciate.”

Yes. We have indeed hardly begun to appreciate it, which is why practically no one goes to Confession any more. In fact, the only thing missing from this excellent Pastoral Letter was a rousing call for Catholics to come back to this sacrament in droves.

The Pastoral Letter also explains in crystal-clear detail just how unlikely it is that a priest would hear from a sexual abuser, especially in sufficient detail to identify the offender and the victim.

Knowing and valuing the Sacrament

Yet our individual Australian bishops know and value the sacrament. If you go through all the diocesan public statements on COVID-19, you will find that only two dioceses suspended access to this sacrament completely.

Almost all the other dioceses in Australia opted for continuing the first rite (priest and penitent alone) with proper social distancing, at the discretion of the individual priest who may have been vulnerable. And thank God for that – it shows that most of our bishops care about our spiritual life and death, as much as our physical.

It’s been wonderful to be able to go to Confession during the COVID-19 lockdown, even when no other sacraments were available.

I know bishops are tremendously busy but I have a lot of time for those who take their turn hearing confessions in their cathedrals alongside their clergy, and I think it’s very grounding for them. I hope this Pastoral will inspire more of that wherever possible.

So my heartfelt congratulations to Archbishop Costelloe for both surprising and delighting me with his authority, charity, and courage. It’s the kind of first-rate local bishop-ing we need in Australia today, as we face such an uncertain and rapidly changing future.

Bishops: summon your people back to this sacrament of healing, and make sure you put in some hours helping out with this yourself. It will make a world of difference, both to you and to us. You have been too far apart from us for too long.