It might have only been at a quarter capacity in terms of attendees, but St Mary’s Cathedral was overflowing with prayers and praise as the Archdiocese of Sydney welcomed four new priests on Saturday.

The cathedral bells peeled joyfully before the 11am Mass, amplifying the delight of those inside and the many more who were joining via live-stream.

The ordination to the priesthood of Fathers John Pham, Noel Custodio, Roberto Keryakos and Jonathan Vala was one for the history books. Originally scheduled to occur on 1 August, the ordination was postponed until 19 September in the expectation that COVID-19 restrictions would have eased to allow more of the ordinands’ family and friends to be present inside the cathedral for the ceremony.

However as the day drew near, it looked like the severe restrictions would remain in place, with multiple requests for an exemption to allow more than 100 people in the spacious cathedral rejected by health department officials.

An 11-hour change of heart and the granting of a three-hour exemption that would allow 300 attendees saw the ordinands making hurried, but excited, phone calls to family and friends with the good news that they could now attend the once-in-a-lifetime event in person.

These families and friends lined up outside the cathedral and waited patiently to register their names and contact details at the doors, and not even the compulsory masks they wore could conceal their wide grins and teary eyes.

Whatever the restrictions on numbers and activities, the four new priests were not going to delay their ordination any longer. Father John Pham said that he did not consider delaying again, because he believes that the timing was in God’s providence.

“Why didn’t it happen last year or at another time but during this time?” Father Pham pondered. This abandonment to God’s providence was especially poignant for the young priest whose parents were unable to travel from Vietnam to be present due to pandemic restrictions.

“…you must help rebuild people’s confidence and trust, reawaken their hunger for that Eucharist and community they can only find at Mass…” Archbishop Anthony Fisher OP

They were, however, tuning in via the live-stream, as were many of Father Vala’s classmates and formators from the Pontifical North American College in Rome, and Father Roberto Keryakos’ maternal grandmother, who is in lockdown in a nursing home. “She’ll be with me virtually as much as she is spiritually,” Father Keryakos said.

Archbishop Anthony Fisher OP had originally offered to celebrate four separate ordination ceremonies, so that each new priest could choose 100 guests to be in attendance.

However, the four were determined to stick together. They had begun the first year at the seminary together, and so naturally wanted to be ordained together as well.

“It was just fitting that you get ordained next to your brothers,” commented Father Noel Custodio, a sentiment that was echoed by each of them.

Although slightly modified to take into account social distancing requirements, the ordination ceremony lost nothing of its beauty.

The unusual nature of present circumstances was, however, a focal point for Archbishop Fisher’s homily, with the Archbishop encouraging the new priests to be a “spiritual pandemic” for the whole country.

“Beyond COVID you must help rebuild people’s confidence and trust, reawaken their hunger for that Eucharist and community they can only find at Mass, and re-sacralise a culture increasingly profane, anxious or indignant,” Archbishop Fisher exhorted the new priests.

“Where health authorities act as if preserving life were all that matters and politicians talk as if the economy is the only other thing, you must stand for a richer conception of the good life: one that gives due importance also to family and friendship, truth and beauty, work and leisure, integrity and justice, above all to the sacred.”

Offering words of gratitude on behalf of the newly ordained, Father Custodio thanked family and friends, acknowledging especially those who could not be there in person.

He thanked Archbishop Fisher for ordaining them, and for his fatherly care and example of preaching truth and love.

He also thanked Cardinal George Pell, who was described as a “constant support and pillar of faith,” seminary rectors and staff, teachers and professors for providing them with the environment to deepen their love for God and configure themselves more closely to Christ.

At the conclusion of the Mass, Archbishop Fisher reminded the congregants of the hope that surrounds the ordination of priests and alluded to the heavy restrictions that remain on religious practice during these times.

“In a time of such anxiety and uncertainty about our future health and happiness, including our freedom to worship, it’s especially encouraging to have four new priests ready to spread a pandemic of faith and reason, beauty and goodness, hope and courage, love and mercy,” he said.

The day after the ordination, the four new priests celebrated their Masses of Thanksgiving with family and friends in attendance.

The new priests will, for now, remain at the parishes where they have been serving as deacons.

Father Pham will have his first placement as a priest at the parish of St Mark’s, Drummoyne. Father Custodio will remain at Sydney Harbour North parishes, and Father Keryakos at All Saints, Liverpool.

Father Vala will return shortly to Rome to continue his studies and will have to spend two weeks in self-isolation upon arrival.

This is something Father Vala has already been through, as he experienced two weeks of hotel quarantine on arrival into Sydney for his ordination. He described the four-week isolation as “absolutely worth it”.

“What’s four weeks of waiting patiently after seven years of seminary?” he said. 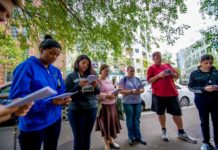 Guest Contributor - October 21, 2020
HSC Advice for Parents HSC exams kicked off this week which means stress levels are rising among Year 12 students. For parents, it can be...

Hustled by the Spirit

What the left can learn from Pope Francis

Q&A with Fr John Flader: The campaign for death