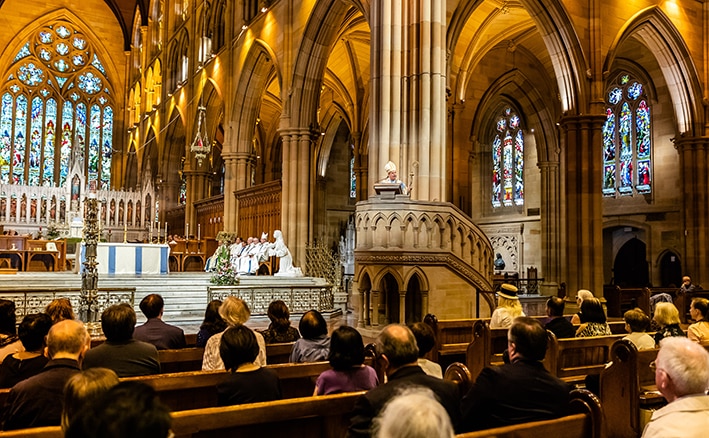 Last week, the numbers for gatherings in places of worship in New South Wales were increased from a maximum of 100 people to a maximum of 300 people, provided that there is still 4 square metres of space for each person.

For many parishes, this increase made little difference from a practical perspective.

But it is important that the increase was given, because for far too long, places of worship have been treated differently to other venues across the state, and across the country.

Article 18.3 of the International Covenant on Civil and Political Rights, to which Australia is a signatory, reads: “Freedom to manifest one’s religion or beliefs may be subject only to such limitations as are prescribed by law and are necessary to protect public safety, order, health, or morals or the fundamental rights and freedoms of others.”

Based on a plain reading of this article, I don’t think many can dispute the authority of governments to have initially restricted religious gatherings during this pandemic.

However, the international human rights guidance does not stop there.

The United Nations Human Rights Committee has made clear when the right to religious freedom can be limited on public health and safety grounds.

It says that restrictions “must be directly related and proportionate to the specific need on which they are predicated” and “may not be imposed for discriminatory purposes or applied in a discriminatory manner.”

As time goes on, community transmission decreases and other venues are allowed to reopen to a greater capacity, questions are rightly being asked about whether ongoing restrictions on public worship fail either or both of the tests on proportionality and discrimination.

As NSW opens up concert venues to 50 per cent capacity subject to the 4 square metre rule, to a maximum of 1000 persons, places of worship, like Hillsong, with a set up largely indistinguishable from a concert venue, remain limited to 300 people.

In Western Australia, theatres, concert halls, auditoriums, amphitheatres, cinemas, comedy lounges, and performing arts centres can open up to people beyond the one person per 2 square metre rule, but the restrictions for places of worship remain in place.

In Melbourne, religious gatherings are limited to 10 indoors and 20 outdoors, whereas clubs and restaurants can welcome 20 indoors and 50 outdoors.

In regional Victoria, where the number of active cases is down to single digits and the rolling 14-day average of community transmission is well below 0.5, the restrictions are especially egregious. Churches can only have 20 people indoors, while cafes and restaurants can have 40 indoors and 70 outdoors.

Over time, the reasons given for this differential treatment of churches have bordered on the ridiculous.

We have been told that our parishioners are all old and so fall into the high-risk category.

We have been told that our clergy are similarly too old, our communities are too close-knit, or churches aren’t licensed in the same way as clubs and restaurants and so do not provide a heavily-regulated environment.

We have been told our cleaners are usually volunteers and not paid employees, and so we cannot be sure that our surfaces will be cleaned to the same standard as other venues.

This range of excuses, based on stereotypes rather than evidence, point to three different possibilities: governments and health officials are either ignorant of, indifferent to, or hostile towards the practice of religious worship and its importance tin the lives of so many Australians.

I’m not sure which it is, and I think it is probably different for different bureaucrats, but it is very hard to look at this and come to a different conclusion.

As disturbing as the government’s diminishment of the importance of religious worship might be, more concerning, I must say, is our own response.

While lobbying government for increased numbers in churches has been somewhat successful, in some places, our church attendance has not matched the increase.

Too many people have not yet returned to Mass: not because they are in higher risk categories or are fearful of community transmission, and not because they find the pre-booking too difficult or annoying, but because they have just gotten used to not attending, or have decided that Mass online is just as good.

In this respect, the live-stream Masses have been a blessing and a curse.

I for one am a massive advocate of reducing our digital offerings significantly, particularly in the short term, and instead using those same channels to invite people to come back and gather again.

The biggest risk to come out of the COVID pandemic is that we will allow the indifference of the government to the importance and centrality of religious worship become our indifference.

The only way we can ensure it doesn’t is by returning to church with a greater desire and devotion than we have ever had.