Graduates from four Sydney Catholic schools will benefit from a scholarship program, opening up tertiary study to them.

Liverpool Catholic club has continued its long tradition of supporting local Catholic schools with the awarding of four education scholarships to local students following their 50th Anniversary Members mass and luncheon at the Hoxton Park Rd Club in Prestons.

The scholarships are offered to the Dux of each of the schools and are part of Liverpool Catholic Club’s broader scholarship donations program. Each scholarship includes $6,500 which goes towards their first-year University fees, plus $800 towards book fees.

All Saints Catholic Senior College: Daniel Breitenberger. Daniel scored an ATAR of 98.45 and he is currently studying for a “Bachelor of Applied Science (Diagnostic Radiography) at the University of Sydney.

Freeman Catholic College: Nhi Vu. Nhi scored an ATAR of 99.6 and she is currently studying for a Bachelor of Medical Science at UNSW

Clancy Catholic College: Chelsea Du Buisson-Perrine. Chelsea scored an ATAR of 99.5 and she is currently studying a Bachelor of Law/Bachelor of Business at Western Sydney University.

All Saints Catholic Senior College: Manhua Lu. Manhua scored an ATAR of 96.6 and she is currently studying for a Bachelor of Commerce and Computer Science at the University of NSW.

Freeman Catholic College: Vincent Nguyen. Vincent scored an ATAR of 99.75 and he is currently studying a double degree; a Bachelor of Engineering (Honours) / Bachelor of Computer Science at UNSW.

Good Samaritan Catholic College: Fadi Jan. Fadi scored an ATAR of 99.05 and he is currently studying a Bachelor of Software Engineering (Honours) at UNSW.

Clancy Catholic College: Ashley Simonetta. Ashley scored an ATAR of 97.1 and she is currently studying a Bachelor of Commerce at the University of Sydney.

“Ensuring both our College and the schools in the local community are well supported, highlights what to me is the mandate of the Club, to give back to the local community of which they were formed. The scholarship program for the College Dux is one such action.

“Supporting the young people who will become the future leaders and innovators of the community in which they belong is evidence of the efforts of the directors of the club to support our local talent. The effect of this program may be hard to measure and quantify, but surely the ripple effect will be seen for years to come.”

The Liverpool Catholic Club Education Scholarships have been in place since 1992, with earlier bursaries existing since 1972. While the original bursaries were $25 for families earning less than $5000 a year, since 2003 the Club has so far provided $1.4 million in scholarship support. 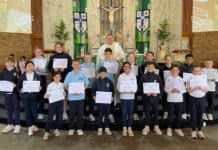