When making your Christmas plans this year, remember this: it’s an optimal time to invite that lapsed Catholic relative or friend to Church, according to latest research.

National Church Life Survey (NCLS) Research director Dr Ruth Powell said that many non-churchgoers would be open to going if they were invited by someone close to them.

“We found that 28 per cent of Australians said, ‘Yes if someone invited me to church I would go’, and the most common reason was ‘Because it’s important to the friend or family member who asked me’.

“People who’ve had a history of having attended church are more likely to say yes. Just because they’re no longer there doesn’t mean that they have closed off from the idea of attending. But even among people who had never attended church before there are still some who say, ‘I would think about it’.

Dr Powell said that by far this year’s most striking finding was an “enormous drop” over the past two years in people who believed that religion is a good thing for society.

Only three in 10 people surveyed agreed that it was, the same number believed it wasn’t, and four out of 10 were unsure.

“This is an indicator of disinterest and distrust that is present at the moment,” Dr Powell said, and likely reflected the impact of the Royal Commission into Institutionalised Child Sexual Abuse and last year’s marriage law reform, as well as international events relating to religion affected Australians’ views and perspective.

Australians are “moderately religious,” she said adding that while religious engagement has eroded over time, religious practices and experiences continue to be present in the community and Australian prefer Christians churches to have a role in fostering cohesive communities and a good society.

The survey is held each year to find out the religious and spiritual attitudes and beliefs of a representative sample of Australians over 18 years. This time results were released as part of a summit held in conjunction with McCrindle Research and The Centre for Public Christianity at the Australian Catholic University’s North Sydney campus on 21 September.

Mark McCrindle, principal of McCrindle Research, said that in a digital world where the rate of change is faster and more unpredictable than ever, churches and church ministries need to strive to understand emerging generations so as to better engage with them.

“What worked great with Generation X may not engage Generation Y,” he said.

The 2018 Australian Community Survey was an online survey conducted in early December 2016 by NCLS Research, with a sample drawn from a large online research panel. Results canvassing the views from the Australian population are based on a sample of 1,200 Australians. 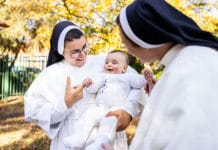