The Australian Catholic Bishops’ Conference and Catholic Religious Australia today released its joint response to the recommendations of the Royal Commission into Institutional Responses to Child Sexual Abuse.

“To the survivors of Child Sexual Abuse, their families and loved ones, and to those who support them, often against an unresponsive or even obstructionist Catholic Church, we are profoundly sorry,” Sr Cavanagh said.

“The Royal Commission was an important and necessary period for the Australian community. We are grateful to the survivors who shared their stories and whose courage has meant that society broadly, and the Catholic Church specifically, are now safer places for the most vulnerable.”

“Our response to these recommendations is not to be about mere compliance. It is at the heart about ensuring that the safeguarding of children and vulnerable adults will be integral to everything we do in the Church, every activity, every ministry.”

Archbishop Coleridge said that “far too many” clergy, religious and lay people within the Church in Australia had “failed in their duty to protect and honour the dignity of all including and especially the most vulnerable, our children and our young people.”

“With one voice, the bishops and the leaders of religious orders here this morning make the pledge, never again.”

He said the Church had accepted all the Royal Commission’s recommendations except in relation to removing the seal of Confession.

“We don’t accept that safeguarding and the seal are mutually exclusive. Nor do we believe that abolishing the Seal will make children any safer. In some circumstances it may even make them less safe.”

The recommendations from the Royal Comission, handed down on 15 December last year, asked non-government institutions to provide a response within 12 months.

The Catholic Church’s response can be found: here

Of the 189 recommendations made by the Royal Commission, 80 were either directly or indirectly related to the Catholic Church and its ministries.

The only recommendation which the Church was unable to accept was the requirement that priests break the seal of confession in circumstances where child abuse is confessed or disclosed within the context of the sacrament.

All other recommendations affecting the Church were either accepted, accepted in principle or – at the request of the Commission – referred to the Holy See.

The Archbishop of Sydney, Most Rev. Anthony Fisher OP, said today that this document was a significant step in the Church’s response to the Royal Commission.

“This document is neither the beginning, nor the end, of our response to the Royal Commission,” he said.

“In many ways, the Church has been responding to these terrible crimes for decades. In others, it was the wisdom of the Royal Commission and the courage of the victims who told their stories that shed light on areas where change was still needed.”

The Archbishop also acknowledged the ongoing pain of survivors and others affected by the heinous crimes committed, but expressed his hope that the release of the official response would provide people with hope that the Church is committed to doing what is best for children.

“I know that the release of our response will not, of itself, bring healing to those impacted by these abhorrent crimes.

But I hope and pray that the commitment it contains will bring you some hope that the Church is committed to doing better for children and the community,” the Archbishop said.

That report can be found here: https://www.tjhcouncil.org.au/ 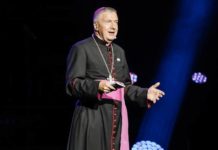 Threat to the seal of confession