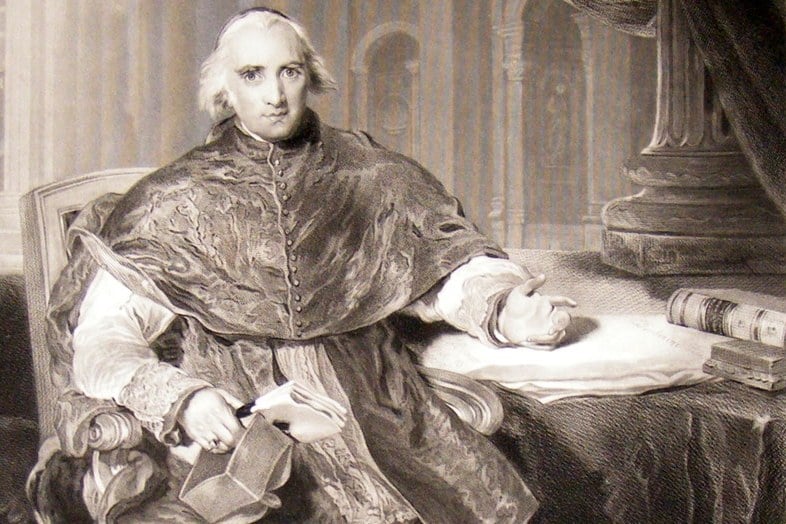 During Synod 2015, I’ve been reading John Martin Robinson’s Cardinal Consalvi: 1757-1824, a biography of Pope Pius VII’s secretary of state, one of the most impressive churchmen of his day, or, indeed, any day.

Ercole Consalvi, born into the Roman nobility as the winds of Enlightenment-driven change were about to transform Europe, was educated for a career in law and administration, which in his case meant life as an official of the Papal States: that broad swath of central Italy that constituted the pope’s “temporal power”.

A favourite of Pope Pius VI, Consalvi followed that pope into exile when the forces of revolutionary France seized the Papal States and Rome. Then, when Pius VI died under house arrest, Consalvi organised the conclave that, after 3½ months, elected the Benedictine monk Barnaba Luigi Chiaramonti as Pius VII.

It was an inspired choice, for the integrity and open-mindedness of Pius VII restored the prestige of the papacy, while his quiet acceptance of suffering when Napoleon turned against him confirmed the esteem in which he was held and helped bring about the downfall of the auto-crowned Emperor of France.

One of Pius VII’s wisest decisions was to name Ercole Consalvi his secretary of state, creating this layman a cardinal – Consalvi was ordained a deacon at the time – and putting him in charge of virtually the entire apparatus of papal governance.

Reading the story of Consalvi as de facto prime minister of the Papal States is a step back into a long-vanished world with striking parallels to our own time.

Then there was Consalvi’s decades-long effort to gain local churches and the papacy as much breathing room as possible, clear of the stifling embrace of state power.

State by state, concordat by concordat, Consalvi worked to create the legal conditions in which the Church could be itself and govern itself, and in which the pope could communicate freely with his flock.

It was no easy business then, any more than it is today, and the parallels between the attempts by various regimes, both reactionary and liberal, to get control of the Catholic Church suggest that today’s battles for religious freedom in full are not without their 19th-century precedents. (Sylvia Mathews Burwell, US Secretary of Health and Human Services may seem, at first blush, a curious contemporary analogue to the Austrian foreign minister, Prince Clemens von Metternich; but both tried to use the Church for state purposes, and both had to be resisted.)

Cardinal Consalvi also reminds us that the world owes the Roman pontiff an enormous debt of gratitude for preserving so much of its classical heritage.

To take one striking example: when Pius VII and Consalvi returned to Rome from exile, only the top halves of the arches of Septimus Severus and Constantine were visible, the rest being buried under centuries of rubble.

It was Consalvi who had these two great artifacts and much of the rest of the Roman Forum excavated, as it was Consalvi who built a new wing on to the Vatican museums in order to display the art recovered from French looters.

Yet for all that is admirable in the life and work of Pius VII and Ercole Consalvi, it strikes me that the Church and the popes are well rid of the Papal States these two remarkable men tried to preserve and defend.

The temporal power was a ball-and-chain for the papacy, impeding its essentially spiritual character and work.

And it’s no accident that the dramatic rise in the moral prestige of the papacy – which gives popes a unique form of power in international public life – was preceded by the collapse of the pope’s role as autocrat of a C-league European power.

Loss, in this case, was manifest and blessed gain.

Your Life, Your Way: Self help for teens

Benjamin Conolly - September 23, 2020
For your chance to WIN a digital copy of Your Life, Your Way by Joseph Ciarrochi send your name, email and postal address to...

Are your kids ‘fun’? It matters.

20 Fun activities for the school holidays

20 Fun activities for the school holidays