I was relieved to hear that the Australian Catholic Bishops Conference (ACBC) has already rejected the proposal in The Light from the Southern Cross for a national centre for Catholic leadership.

There were several reasons for my relief.

The first was that the ACBC already oversees things at a national level. They seem to have fairly light hands on the wheel, which is good.

The second reason was that I can imagine the kind of highly paid professional Catholics who would flood into a national leadership centre like this.

It would be like Emerald City in The Wizard of Oz.

The third reason was that rejecting a national leadership centre might make it easier for the ACBC to reject the Plenary Council’s proposed National Catholic Synodal Leadership Council (NCSLC).

The title of this body doesn’t exactly trip off the tongue, and I think it might be Emerald City under another (awkward) name.

I have written before about what I think are the flaws in The Light from the Southern Cross. I think there’s a few good bits in there, but mostly it’s a manifesto for a completely different type of Catholic Church in Australia.

I don’t think it’s a better one. This new model is built along the lines of what we used to call “taking in each other’s washing”.

Meanwhile, our Mass attendance rates are in free fall, and I’ve estimated our churchgoing numbers to be around the 250,000 mark by 2050.

The Light from the Southern Cross was a blueprint for a salaried Church.

Then again, if we’re going to be down to barely 250,000 people, perhaps we can afford to put everyone on a living wage. After all, the Catholic Church’s various agencies and institutions in Australia already employ almost that many people – around 100,000 in our schools, and another 80,000 in our hospitals and health care.

I think The Light from the Southern Cross presents a Church that’s primarily a source of employment, rather than as a living sacrament for the salvation of the world. But the Church was not set up to employ people, or even to provide social services.

I think The Light from the Southern Cross presents a Church that’s primarily a source of employment, rather than as a living sacrament for the salvation of the world.”

Let’s go back to the Acts of the Apostles. The early Church was given a specific set of tasks – to baptise all nations, and to be witnesses (martyros) of Jesus Christ.

How did this play out in action? Electing a new apostle to replace a traitor. Proclaiming the truth about the Resurrection. Calling everyone to repentance.

We can add: Telling everyone to save themselves from this perverse generation. Daily worship together, including ‘the breaking of the bread’ – what we now call the Mass. Liquidating assets to provide for the needy.

I especially like the last one, because I think we’ve all suffered from Church fundraising at one stage or another.

The early Church expected people to sell their valuables to raise money, rather than to buy lamingtons.

How did God respond to these activities?

“And the Lord added to their number daily those who were being saved” (Acts 1:47). When Peter gave the world’s least politically correct exhortation at the first Pentecost, he made three thousand converts on the spot.

True, everyone spent quite a lot of time in prison and explaining themselves to unsympathetic government officials.

But they also healed people on the spot because they didn’t have any money to give them.
And when the healing causes a first century media sensation, Peter used the opportunity to tell everyone to repent – again – in language that would lead to him being cancelled today. (As it turns out, it led to him being cancelled in the first century as well).

It’s like another world, isn’t it? And yet should it be?

Perhaps we should be marvelling instead at how far we’ve strayed from this original dynamic, living Church, overflowing with the Holy Spirit.

So perhaps instead of adding to the current exhaustion and sclerosis – taking in each other’s washing for handsome salaries – we might like to look at waking up the heart of the Church in Australia? 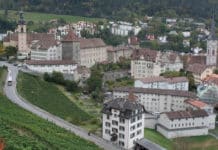