Christians are the most persecuted group in the Middle East, indeed in the world today, according to Lyle Shelton of the Australian Christian Lobby, who spoke at the 2016 St Thomas More Society Christmas Party on 22 November.

“In the Middle East, Christians are losing their lives, losing their homes, their livelihoods, and being displaced from where they have lived for centuries,” Mr Shelton told the Catholic lawyers gathering.

“The western media has largely ignored this persecution for reasons of political correctness.”

Mr Shelton, speaking in the Speaker’s Garden of Parliament House, referred to the life-size statue of St Thomas More, Chancellor of England at the time of King Henry VIII.

“Lawyers ought imitate More, standing up for human dignity. Practices such as abortion, euthanasia, commercial surrogacy, same sex ‘marriage’, (and) treatment of gender as a ‘social construct’ are an assault on human dignity.”

According to Mr Shelton, “Accompanying such practices is an assault on freedom of speech, such that it is increasingly difficult to discuss such matters without sanctions from the thought police.”

“The attack on Archbishop Porteous, the Catholic Archbishop of Hobart, is symptomatic of an unwillingness to have genuine dialogue.”

“Respect for human life, and for marriage and family, at least theoretically, has been a distinguishing aspect of western society, since the development of Christianity.”

“The Australian Christian Lobby with some 80,000 supporters argues for truth, and the rights of conscience, which are the basis of a decent society.”

The gathering was sponsored by Damien Tudehope MP, chair of the Parliamentary Committee on the Independent Commission Against Corruption, and attended by parliamentarians from both sides of politics, as well as lawyers.

The St Thomas More Society is not a political organisation, and includes supporters of all major political parties.

According to the President of the Society, Michael McAuley, the issues Lyle Shelton and the Australian Christian Lobby are raising, are matters of human rights which transcend political issues about which there can be legitimate differences. 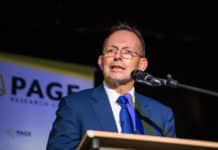