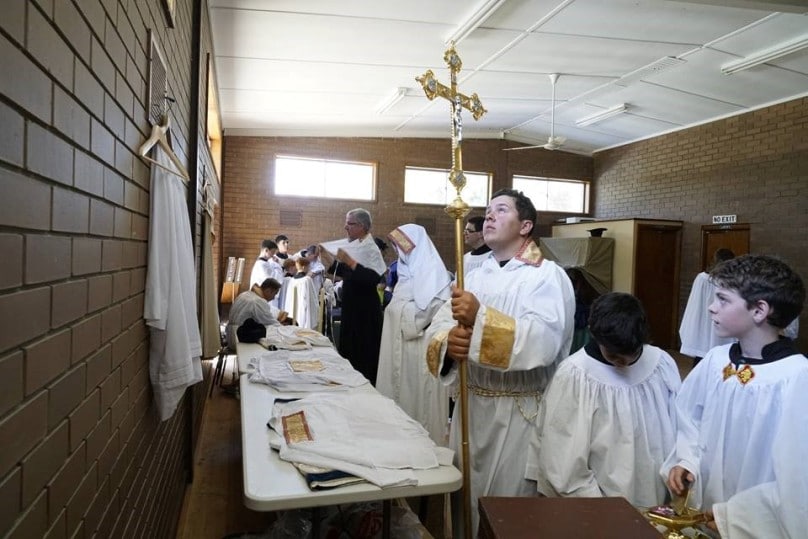 Generally, when people go on pilgrimage, it’s a once-in-a-lifetime thing. Take, for ex­ample, the Camino de Santiago, a gruelling 790km trek across the top of Spain, or the pilgrim destina­tions of Rome, Jerusalem, Lourdes or Fatima.

These pilgrimages are often turning points in one’s faith life.

The annual Christus Rex pil­grimage from Ballarat to Bendigo, on the other hand, brings back re­peat offenders.

Some have been walking it since they were children, and now take children of their own.

So what brings these people back? What are they trying to prove or capture by taking three days to walking a nondescript stretch of Victorian freeway, which could be covered in just over an hour by car?

While everyone walks the Chris­tus Rex for their own reasons, there are two things that strike this author every year.

First there is what might be called the “snapshot moments”, priceless moments of honesty and beauty that serve as a sort-of spiri­tual injection for the next year.

Highlights this year included a ten-year-old singing the Ave Maria “all by herself ”; a father allowing his exuberant daugh­ters to “help” him; altar servers kneeling throughout a 90-minute Mass; a Croatian priest in a bat­tered cassock hearing Confession; the man who carried gold candle­sticks so that God would have the best – even at a Mass celebrated in a forest; the bells, the smells and the crickets; the happy faces in the kitchen; the drivers (of the bus, truck, support vehicles and port-a-loo); the new loves and the old loves, the friendships and the conversations; the blisters and the flood of gratitude when you realise there is still hot water in the show­ers. 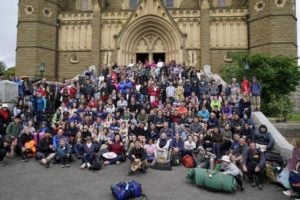 The second is remembering that the Christus Rex pilgrimage serves as a metaphor for life.

This is a tired cliché, but it is not meant in the usual way of “life is a pilgrimage” or that pilgrimage re­flects that “life as a journey”.

Rather, during the quiet of the three days, you get the feeling that the Christus Rex pilgrimage is a little closer to what a life should be like.

It’s a welcome break from our increasingly frenetic, “post-mod­ern” lifestyles that pushes relent­lessly forward, longing for the next thing, the next holiday, the next job – “bigger and better” than be­fore.

It’s the chance to treat time as cyclical, rather than linear, as you allow yourself to return to the same point, walk the same path, and recover some of the wisdom that you forgot (once again) during the year.

It’s also the simple joy of being surrounded by people who live as if God is alive.

This is not to say that the Chris­tus Rex is the City of God.

Each year has its own challeng­es, and this one was no exception.

First, there was the mosquito plague. During what would have otherwise been a lovely 100km stroll across the Victorian country­side, the traditionally minded pil­grims were greeted by a swarm of mosquitoes. Thirsty mosquitoes.

Then there was the fire.

On the first night, at around 2am, a panicked voice yelled, “Fire. Fire!” to the women and children

sleeping in the hall of the Bowling Club at Smeaton.

Anxious whispers grew louder, children cried, and the hall began to stir, until the officials intoned everyone back to sleep. (I am not proud of it, but my mindset was; “unless I am literally on fire, I am not getting out of my sleeping bag.” Thankfully, the men, camping in the nearby field were more com­munity minded and several spent the night helping the nearby farm­house that was, sadly, on fire.)

But these and the other trials – blisters, sunstroke, an introverted fear of people – always seem to pale at the end of the three days, and one is left with the feeling of cama­raderie, grace and consolation that will help you continue your daily pilgrimage.

It is a testament to the Christus Rex pilgrimage and its organisers that neither fire nor mosquito plague could dampen the experience, and on the last day there rang the usual chorus of “see you next year”.