Young adults are tough to minister to. We’re on the move, our peers aren’t going to church with us, and we’re most likely to sneak out of the back of the church before someone can hand us a parish registration form.

But we desperately want community — and faith-based ones especially. As we move into new phases in life, we remember fondly the bonds that were formed in our high school youth groups and university service trips.

One of the things that has surprised me most about starting a new podcast for young Catholics is how many people write in to say that just knowing there are other young Catholics out there on the other end of their headphones is a consolation for them.

Unfortunately, so many of us suffer from this awful tendency to demand a Catholic Catch-22: 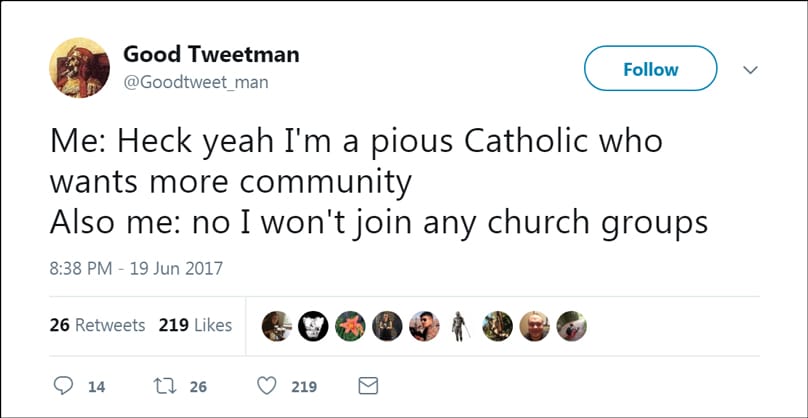 The preparatory document for the 2018 world Synod of Bishops on youth instructs the Church to “give major importance to young people’s involvement in the structures of participation in diocesan and parish communities, starting with pastoral councils, inviting young people to make their creative contribution and accepting their ideas, even when they appear challenging.”

I think the document has it right. The onus is on parishes to open up spaces for young adults to serve. But so many young adults hold back from engaging in parish life because we’re waiting for the world’s most dynamic young adult group to form before we make any first moves toward committing to a parish or community.

I was nervous when I filled out the information card for ARISE, a new small-group, faith-sharing program held once a week in the home of a parishioner. I had apprehensions about not knowing anyone in the group, about being the youngest person by far, and therefore not having enough life experience to have anything meaningful to contribute. And as I sat around George and Kathleen’s table for the first meeting, I realised those apprehensions that I had were accurate — but they weren’t at all limitations.

There are some things that you just can’t get at a Theology on Tap event with other 20-somethings: like being in the presence of two couples, one married for 25 years and the other more than 50, while I began a new relationship; hearing about the faith of parents and single adults; and learning that friendship can be just as much of a challenge later in life but remains fiercely as important.

Young adult Catholics suffer from lacking a community of other young adults, but we fundamentally suffer from a lack of a wider Catholic community. A parish can offer that — even without the hip young adult group.

If you’re nervous about going to a meeting or a program alone — that’s OK. See if you can find just one other person your age who would want to go with you. They could be a fellow parishioner or just someone who you Soul Cycle with and also happens to not think it’s totally crazy that you go to Mass on Sundays.

Now, this isn’t exactly a strategy for some of our peers who haven’t been active in the Church for a long time, or ever. New modes of evangelisation remain to be developed there.

But for those of us who have had recent experiences being a part of a church community, whether that was your Catholic high school or your college campus ministry center, we can take a courageous first step into welcoming the community that a parish can give us, imperfect as it may be.