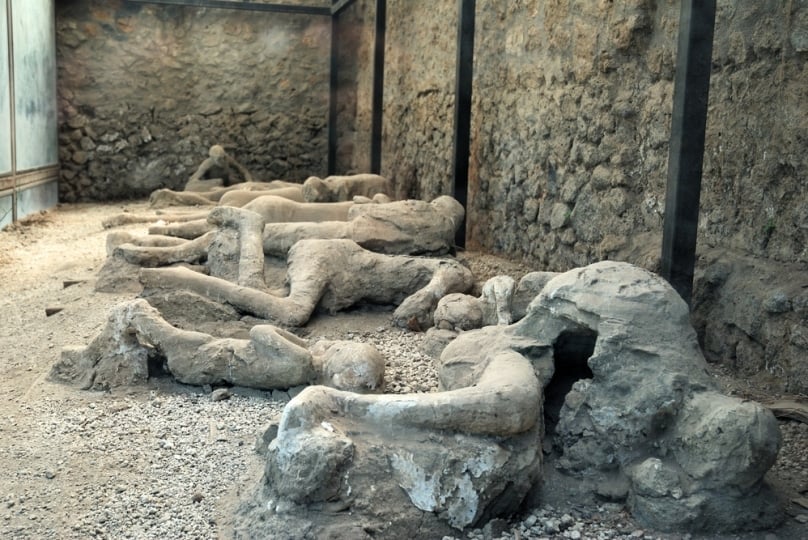 On a recent trip to Europe as part of the Campion College Rome School program, I visited the ancient town of Pompeii with staff and students of the college.

Pompeii lies below Mount Vesuvius, a mountain which gave it protection but which would, one infamous day in AD79, destroy it, when – entirely unexpectedly – it erupted, spewing molten ash, gas and pumice on all sides, consuming not only Pompeii but also the seaside town of Herculaneum and other surrounding villages.

The great wonder of Pompeii is that the manner of its destruction paradoxically meant it was preserved.

While hundreds of other ancient Roman towns simply evolved or were destroyed by the passage of years, Pompeii – like Herculaneum – retains its first-century form. Even some of its people remain vividly present in the plaster casts made from their bodies’ moulds that were captured forever by the very ash that consumed them.

Travelling with the college meant that I was away from my family for three weeks. It was in fact the first time since his birth that I had spent more than a short period apart from my young son, now nearly two and a half years old.

It was particularly poignant for me, then, to see the plaster cast of a boy about my son’s age, lying on his back with his hands raised before his eyes, attempting to shield himself from the volcanic gas and ash that killed him (though it looked now that he was shielding himself instead from the gazes and camera lenses of hundreds of passing tourists!).

Gazing on the infant, it felt as if we were intruding on something sublimely personal, intimate and sacred – a young boy’s final moment of life and his hopeless effort to extend it.

Who was this boy, I wondered to myself. Where were his parents? As any father will tell you, one of the great struggles of parenting is the shocking feeling of helplessness when your child – who sees you as his ultimate protector – hurts himself or puts himself in sudden danger just beyond your reach.

What must have gone through the minds of that boy’s parents as they realised that they and he were about to die; that there was nothing they could do to protect their son; that the future they had imagined him living and the life they had endeavoured to prepare him for was any instant to be snuffed out, along with their own? Did he call out to them? Did he understand they could not now help him?

The Irish poet Derek Mahon, in his magisterial poem A Disused Shed in Co. Wexford, links Pompeii with Treblinka, a Nazi extermination camp in Poland, and – less dramatically, but no less poignantly – with collapsed Peruvian mines and with the disused shed of a burnt-out hotel “from civil war days” in Ireland, places where tremendous human suffering and loss of life have occurred on varying scales. Mahon imagines the people of these places calling out to us – their living descendants – in their final moments.

“They are begging us, you see, in their wordless way, / To do something, to speak on their behalf: ‘Save us, save us’, they seem to say, ‘Let the god not abandon us / Who have come so far in darkness and in pain’.”

Mahon’s answer to their “wordless” begging was to write a poem, one of the greatest written in English in the last century, in which he indeed speaks on their behalf, becoming a voice for the voiceless. But notice what these poor souls say through him:

“Let the god not abandon us / Who have come so far in darkness and in pain”.

It is very difficult not to feel, as the dead of Mahon’s poem feel, that God abandoned them in their last moments.

“Where was God?” we ask, when we are confronted with such enormities. Wouldn’t He, as a loving father, want to spare His children such horrific fates as these? Why would He allow Vesuvius to erupt and destroy that poor helpless boy of Pompeii? Why does He allow the innocent to suffer?

There the God-Man Himself felt abandoned by His own Father, as He took upon Himself the sufferings of the whole world, including those of that poor little Pompeian boy, a strange reminder to me of my own son who (so my wife Helen told me each day on the telephone), wondered where daddy was and why he had gone away.