Pope Francis accepted the resignation of Archbishop Philip Wilson, who had been found guilty by an Australian court of failing to inform police about child sexual abuse allegations.

The Vatican made the announcement July 30.

Archbishop Wilson of Adelaide was sentenced to 12 months of house arrest by the Newcastle Lower Court July 3 with another hearing set for Aug. 14 to assess the location of his home detention.

The archbishop was convicted in May for failing to report allegations of child sexual abuse by a priest in the 1970s. He stepped aside from his duties in the Adelaide Archdiocese May 25 but at the time maintained his title as archbishop.

Archbishop Wilson had resisted calls to resign and had said July 4 he would do so only if an appeal of his conviction had failed.

However, “there is just too much pain and distress being caused by my maintaining the office of archbishop of Adelaide, especially to the victims of Father (James) Fletcher,” Archbishop Wilson said in a statement released July 30.

“I must end this and therefore have decided that my resignation is the only appropriate step to take in the circumstances,” he said.

Archbishop Wilson said the pope did not ask him to resign, but he submitted his request to the pope July 20 “because I have become increasingly worried at the growing level of hurt that my recent conviction has caused within the community.” 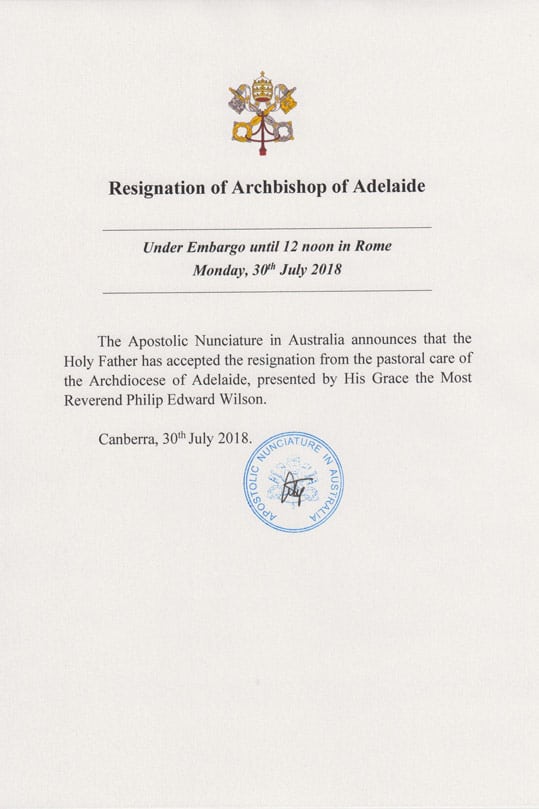 The archbishop said he hoped and prayed his decision would be a “catalyst to heal pain and distress” and allow everyone in the archdiocese, including victims of Father Fletcher, to, according to the archdiocese’s statement, “move beyond this very difficult time.”

The Newcastle court found that, in 1976, then-Father Wilson had been told by a 15-year-old boy that he had been indecently assaulted by a priest, but that Father Wilson chose not to go to the authorities despite believing the allegations were true. Father Fletcher, the abusive priest,was convicted in 2004 of nine counts of child sexual abuse and died in 2016 while in prison.

Archbishop Wilson, who had led the Archdiocese of Adelaide since 2001, is the highest-ranking church official to be convicted of covering up abuse charges. He recently was diagnosed with early stages of Alzheimer’s disease, and throughout the magistrate’s hearing he testified that he had no memory of the conversation with the 15-year-old.

Archbishop Mark Coleridge, president of the Australian Catholic Bishops’ Conference, said that “while the judicial process will continue, Archbishop Wilson’s resignation is the next chapter in a heartbreaking story of people who were sexually abused at the hands of Jim Fletcher and whose lives were forever changed.”

“This decision may bring some comfort to them, despite the ongoing pain they bear,” he said in a written statement released July 30.

“Archbishop Wilson has been praised by many for his work to support victims and survivors of child sexual abuse as bishop of Wollongong, archbishop of Adelaide and president of the bishops’ conference,” Archbishop Coleridge wrote.

However, he said, Archbishop Wilson has decided “that his conviction means he can no longer continue as archbishop because to do so would continue to cause pain and distress to many, especially to survivors, and also in the Archdiocese of Adelaide.”

Meanwhile, the Australian Catholic Bishops’ Conference announced July 26 it would hold a special meeting Aug. 2-3 in Melbourne to expedite the Catholic Church’s formal response to the Royal Commission into Institutional Responses to Child Sexual Abuse.

Archbishop Coleridge said in a statement that they had received additional advice from the Truth, Justice and Healing Council, the Implementation Advisory Group, Catholic Professional Standards Limited, local safeguarding experts and canon lawyers that would better inform the bishops’ response.

“We have also begun discussions with the Holy See about issues that concern the discipline and doctrine of the universal church,” he wrote.

The archbishop said he hoped the bishops’ formal response to the Royal Commission would be released as soon as possible after the early August meeting.

The commission released its report in December 2017 after five years of hearings, nearly 26,000 emails and more than 42,000 phone calls from concerned Australians. The report made 20 recommendations to the Catholic Church, including asking the bishops’ conference to work with the Holy See to change the Code of Canon Law “to create a new canon or series of canons specifically relating to child sexual abuse.”

Another recommendation was for the Australian bishops to work with the Holy See to determine if the absolute secrecy concerning matters discussed during confession also applies to a child confessing he or she has been abused sexually. The report also said the church should consider if “absolution can and should be withheld” if a person confesses to perpetrating child sexual abuse.

The commission called for improved screening of and formation for members of religious orders and asked the bishops’ conference to “conduct a national review of the governance and management structures of dioceses and parishes, including in relation to issues of transparency, accountability, consultation and the participation of lay men and women.”

Planning for mission: the future of Sydney Archdiocese is underway