Everyone would come under proposed therapy ban

“Let’s be clear: there is absolutely nothing wrong with being who you are.  And there’s everything wrong with dangerous conversion practices that tell gay, bi and trans people they need to be ‘cured’.  This bigoted quackery destroys lives.”

With these words, Victorian Premier Daniel Andrews announced the Labor Government’s proposed ban on so-called conversion practices in Victoria, and the tabling of a bill to give effect to this ban.

To sell these types of “conversion therapy” bans, images are often conjured up of same-sex attracted teens being subjected to aversion therapy or electro-shock treatment by psychologists, or to exorcisms and “pray the gay away” camps by their parents and against their will.

No one I know performs, or supports, these types of practices.  Not only are they an attempt at overriding our God-given free will, they also offend the fundamental dignity of the human person.  If this was the “bigoted quackery” that Andrews wanted to outlaw, then he would get no objection from me.

“To sell these types of ‘conversion therapy’ bans, images are often conjured up of same-sex attracted teens being subjected to aversion therapy or electro-shock treatment by psychologists, or to exorcisms and “pray the gay away” camps …”

But that’s not Victorian Labor’s style, is it?  Whether it is euthanasia, radical abortion laws or Safe Schools, they always have to take things to their most extreme, and this “conversion practices” ban is no exception.

Banned under this law would be any mental health interventions, but also “carrying out a religious practice, including but not limited to, a prayer based practice” directed towards a person, with or without the person’s consent, for the purpose of changing or suppressing the sexual orientation or gender identity of the person.  Sexual orientation is defined broadly to mean “a person’s emotional, affectional and sexual attraction to, or intimate sexual relations with, persons of a different gender or the same gender or more than one gender.”

The law applies to everyone.  Medical professionals and religious leaders are not in some special group: every Victorian is subject to this ban.

To illustrate just how expansive these definitions are, let’s consider some of the “bigoted quackery” that would be punished under the proposed laws, and potentially liable for a fine of up to $200,000 and 10 years’ imprisonment.

Christian teenagers who had committed themselves to saving sexual activity for marriage would be prohibited from gathering together to support each other to remain faithful to their commitment to chastity.

Not only would Courage, a ministry for those Catholics experiencing same-sex attraction but who want to live chastely in accordance with their religious beliefs be banned, the teaching of Theology of the Body would not be allowed, and it is even possible that preaching the same verse from Corinthians that got Israel Folau sacked could get a cleric imprisoned.

A man who was tempted to cheat on his wife could not go and see his priest or minister, asking for advice on how to stay true to his marriage vows, without risking the priest or minister being punished.  And alarmingly, the laws as currently drafted would even prevent a psychologist from trying to “convert” the attractions of a paedophile.

“Dan Andrews…is so insistent that something is wrong with the Christian worldview on gender and sexuality that he wants to dictate the form and content of prayer.”

What this law says is that it is illegal to try and dissuade any person from acting out on any sexual attraction, whether the attraction is legal or not, prudent or not, moral or not.

What’s more, there doesn’t even need to be a complaint made by anyone affected by the so-called ‘conversion practice’ for action to be taken.  The Victorian Equal Opportunity and Human Rights Commission has the power to begin its own investigations, compel the production of documents,  including homilies, and insist that any practices it finds to offend the law be stopped.

Does anyone think the Catholic Church won’t be the target of the very first of these Commission-initiated inquiries?  After all, it wouldn’t be without precedent that those in the Victorian “justice” system begin an investigation without a victim.

For all of the rhetoric about there being “absolutely nothing wrong with being who you are,” Dan Andrews doesn’t believe it for a moment.  He believes there is indeed something wrong if “who you are” is a person of faith or of the moral conviction that sex is sacred and not merely a recreational activity, and that biology is determinative of a person’s gender.  In fact, he is so insistent that something is wrong with the Christian worldview on gender and sexuality that he wants to dictate the form and content of prayer.

This bill has less to do with protecting the LGBTIQ community than it does with punishing the Christian community for “being who they are”. 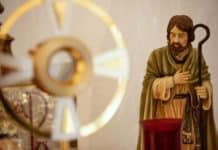