A great global crisis has rocked the world, leaving millions afflicted and sowing fear everywhere. The shock polarises societies, radicalises opinion, and reinforces trends to a new kind of politics – loud, angry, premised on demonising others and promising to restore lost national glory.

Unless something dramatic changes, the stage seems set for a long, bloody conflict. In that context, a pope writes an encyclical letter attempting to offer an alternative before it’s too late.

That could easily be a description of Pope Francis and Fratelli Tutti, the new encyclical he signed on 3 October in Assisi and which was released the following day, the Feast of St Francis, by the Vatican. In fact, however, it’s the background to Quadragesimo anno, the social encyclical published by Pope Pius XI in 1931, now almost a century ago. It was written as the Great Depression was raging, Benito Mussolini was firmly in control in Italy, and Adolph Hitler was moving inexorably towards power in Germany.

In the encyclical, Pius XI laid out the insufficiencies of both free-market capitalism and socialist communism and tried to sketch a third way, rooted in traditional Catholic social teaching but sensitive to the realities of the time.

In a sense, Quadragesimo anno was Pius XI’s attempt to defuse the bomb before it went off. (It would become ever more explicit six years later in Mit Brennender Sorge, Pius XI’s encyclical denouncing National Socialism.) Those efforts failed, and the explosion Pope Pius saw coming turned out to be worse than even he could have imagined.

Time will tell what impact Fratelli Tutti may have, but the parallels are striking.

This is Francis’s third encyclical letter, after Lumen Fidei in 2013 (a text largely prepared under Pope emeritus Benedict XVI) and Laudato Si’ in 2015, and by far his most comprehensive. One has the sense it’s almost this pope’s social and political testament, an encapsulation of his entire papacy in a little over 40,000 words. 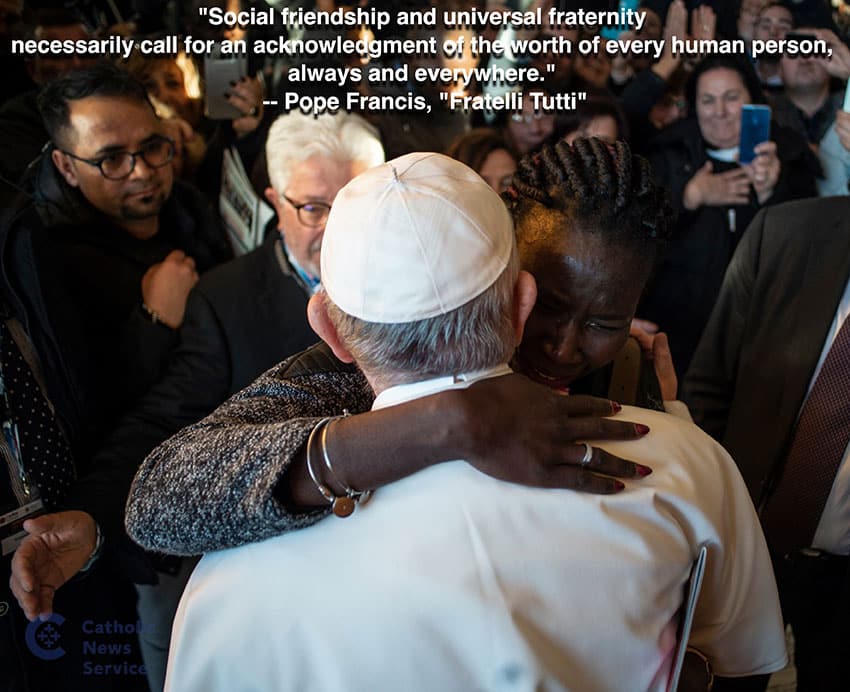 A meditation on political and economic life

Fratelli Tutti contains myriad points, and no doubt will be subject to a thousand different spin cycles. Some may choose to link certain passages to current events – it’s going to be awfully tempting for many Americans, for instance, to flash on the recent Trump/Biden fracas in pondering paragraph 15: “In this craven exchange of charges and counter-charges, debate degenerates into a permanent state of disagreement and confrontation.”

For the record, Francis penned Fratelli Tutti well before the American contenders squared off, and clearly his horizons are much larger than the United States. For that matter, he tells us in paragraph 7 that he began the letter even before the current Covid-19 crisis erupted.

Perhaps the best overall way to frame the encyclical is as an extended meditation on political and economic life in the early 21st century, including the impact of the coronavirus crisis. Francis sees a contest between two flawed alternatives: Neo-liberal individualism, and nationalist populism. His “third way” is a social ethic of human fraternity, rooted for Christians in the Gospel parable of the Good Samaritan.

The pope’s diagnosis of the internal contradictions of neo-liberalism is especially acute in paragraph 168.

“The marketplace, by itself, cannot resolve every problem, however much we are asked to believe this dogma of neoliberal faith,” the pope writes. “The fragility of world systems in the face of the pandemic has demonstrated that not everything can be resolved by market freedom.”

It’s important to stress that Francis’s critique of hyper-individualism isn’t just a matter of economics but culture, and it’s not really left v right. The secular progressive insisting on abortion rights is every bit as much a “neoliberal,” as Francis would see it, as the country club Republican complaining about government intervention. Both reflect what Francis calls a “cool, comfortable and globalised indifference” to others. 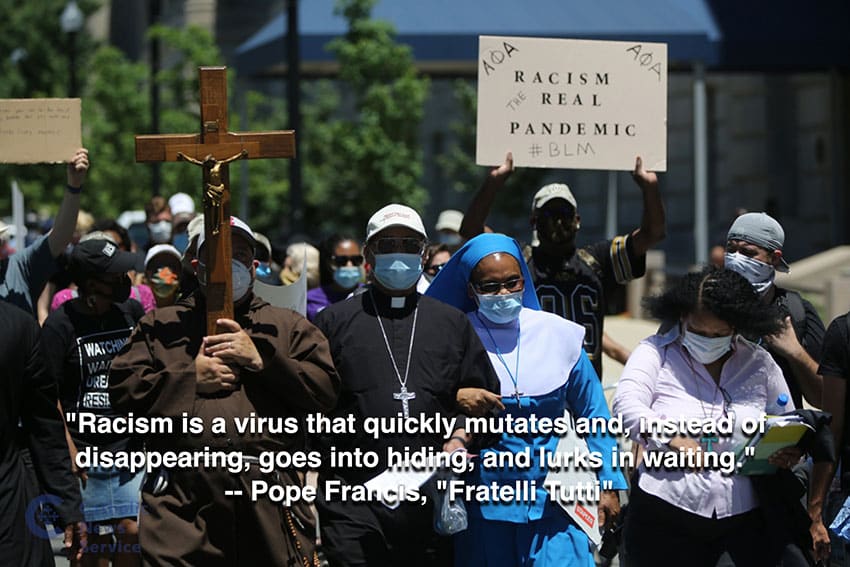 As an antidote to neoliberalism, Pope Francis presents the traditional Catholic notion of the universal destination of goods, which means the right to private property always carries a “social mortgage.” That’s consistent with popes since Leo XIII in the late 19th century, though Francis offers a novel twist by linking it to questions of national sovereignty raised by today’s immigration debates.

“Seen from the standpoint not only of the legitimacy of private property and the rights of its citizens, but also of the first principle of the common destination of goods, we can then say that each country also belongs to the foreigner, inasmuch as a territory’s goods must not be denied to a needy person coming from elsewhere,” he says in paragraph 124.

As for today’s brand of populism, the critical assessments offered in Fratelli Tutti are too numerous to mention. Suffice it to quote paragraph 11’s denunciation of “myopic, extremist, resentful and aggressive nationalism,” which sets the tone for much that follows.

A kind of open rage …

Anyone who follows political discussion these days, anyone who watches the news or who has a twitter account, certainly can confirm the pope’s diagnosis that such exchanges are increasingly nasty, exhibiting a kind of open rage that tells us something is seriously amiss.

“Things that until a few years ago could not be said by anyone without risking the loss of universal respect can now be said with impunity, and in the crudest of terms, even by some political figures,” Francis writes in paragraph 45.

The pope’s proposed remedy, human fraternity, may seem a bit fuzzy, and Francis does not offer a detailed blueprint. However, he does give hints of planks for a platform along the way: Care for the elderly, combatting racism and sexism, compassion for immigrants, debt forgiveness for impoverished nations, a strong role for the U.N. and for regional alliances, and abolitionist positions on both war and capital punishment.

The alternative: an ethic of fraternity

More than anything else, the specific issues treated in Fratelli Tutti appear to be in service to illustrating an ethic of fraternity, one which begins with rejecting aggression as a means of relating to others – and the tendency to aggression, he believes, has been made significantly worse by the coronavirus and the shift to increasingly “virtual” relationships.

He’s equally clear that blood in the streets, in the name of whatever cause, isn’t the answer: “Violent public demonstrations, on one side or the other, do not help in finding solutions,” he writes in paragraph 232.

Make no mistake, Francis isn’t terribly optimistic about where things are trending. He praises various points of light, including the emergence of popular social movements that he lyrically refers to as “social poets.” Nevertheless, it’s telling that even the sections of Fratelli Tutti ostensibly devoted to hope quickly digress into various laments.

More than one pandemic

In a nutshell, Francis sees these two great social “pandemics” – privileged individualist indifference and blind populist rage, apparently mutated into even stronger forms by the literal pandemic of the coronavirus – setting the stage for calamity unless some new force arises to counteract them.

“Just like the popes of the 1920s-30s, Francis sees a dark road ahead, and he’s creating a space for Christians and others of goodwill to occupy in the coming conflict,” Ivereigh told me via email. “Like those earlier popes, he may not be listened to until we’re much further down that dark road.”

A resource to navigate the coming crisis?

On the other hand, Duke historian James Chappel, author of the 2018 book Catholic Modern: The Challenge of Totalitarianism and the Remaking of the Church, argues persuasively that those same 1920s and 30s-era popes saved the Church by shifting from condemning modernity from the outside to attempting to leaven it from within.

“The struggle against totalitarianism has concluded, Catholics won, and the contemporary Church was shaped to the core by that battle,” Chappel wrote.

Has Pope Francis provided the Church with the resources to navigate another such great global struggle and come out the other side, alive and kicking? Only time will tell, but when that assessment eventually is drawn up, the conversation almost certainly will begin with Fratelli Tutti. – Cruxnow.com

John L. Allen is one of the world’s leading reporters on the Vatican and the Catholic Church.