“I fell,” St Augustine writes somewhere in the Confessions of his earlier life, “into a black pool of lust.” The words might almost have come straight out of Sohrab Ahmari’s memoir From Fire by Water, which in many ways approximates to being something of a 21st Century equivalent of the Fourth Century spiritual giant’s masterpiece.

It’s a big claim, but anyone passingly familiar with the outline of the Bishop of Hippo’s account of his journey towards God will see why Ahmari’s autobiography is one of the must-read books of the year.

The comparison is difficult to avoid. Both Augustine and Ahmari describe in detail the spiritual pilgrimages of highly intelligent young men through a worldly sophistication and sensuality immersed in the philosophically fashionable and influential currents of their time to a final, unexpected surrender to God.

Both are precociously intelligent, both highly educated, both deeply intellectually gifted.
Like Augustine, Ahmari struggled for decades to find a meaning – a reality – he could trust absolutely. Finding no satisfactory answers in the philosophies and ideologies of the age in which he immersed himself, he found himself – like so many before – mugged by God.

That the first concrete step in his conversion comes as the result of what seems very much like a eucharistic miracle or an epiphany – or perhaps both – should whet the appetites of prospective readers.

This is no pious devotional tale but a full-fledged intellectual and spiritual traverse towards a remarkable conversion.

Ahmari, a former Wall Street Journal columnist, currently Opinion Editor for The New York Post, is still only 34 years old, making this memoir unusual for a start. One wonders what is yet to come?

Growing up in the Ayatollah’s Iran, Ahmari was the only child of a bohemian couple who continued – like many of their contemporaries – to live a private secular life under the radar of the new Islamist state.

Given more or less carte blanche as a child by his parents to follow his own intellectual and moral inclinations, Ahmari raised himself on devouring every book he could get his hands on and a constant stream of black market video tapes, mostly American movies and TV shows.

Adopting his parents’ secular mentality, he was careful enough to publicly conform to an official Shi’ite education and moral code but, secretly, idolised America. At the same time, glimmers of his future were already apparent.

Although he dismissed Islam, finding it intellectually and emotionally unsatisfactory in almost every regard, he admired the bravery of one of Shia Islam’s early founders, Hussein ibn Ali, who fought to the death for his faith.

This is the closest Ahmari appears to have got to actual faith in Islam but not enough to prevent him from adopting an official starting position as an atheist in his early teens. When his parents’ marriage broke up, he and his mother were lucky enough to emigrate to the land of his dreams, where reality growing up as a teenager in a trailer park quickly set in. To protect himself from mourning the comfort he had left behind in Tehran for new-found poverty and loneliness growing up as a stranger in the Mormon-dominated state of Utah, he read the texts that had always been disallowed in Iran.

His first love affair was Nietchze, Zarathustra and the death of God. By this stage, Ahmari was a serious, committed atheist.

As he progressed through high school, increasingly a misfit by virtue of not having been raised with any reference to any particular virtues and an outsider because of his Iranian heritage, he immersed himself more and more in nihilism, drugs and pornography.
But Nietzsche’s legacy proved less and less satisfying. At university he drifted into full-fledged Trotskyism, spending several years endlessly discussing the dialectic and analysing capitalism’s looming collapse before moving on to Camus, Sartre, deconstruction and modernity’s post-modernism.

At every stage sex pervaded everything, yet each successive phase proved even less satisfying and more illusory than the one before. And one cost was clear: the further he went, the more selfish, self-righteous and unhappy he was becoming. Working as a teacher his first brush with something completely different was a fellow newly-graduated Orthodox Jewish teacher whose commitment to his students from poverty-bound inner city neighbourhoods where violence and drugs ruled was the first serious witness to a consistent moral standard and virtues that Ahmari had ever encountered.

“This is a remarkable story. More importantly, Ahmari’s journey is the journey of precisely the generation with which the Church struggles to communicate … ignorant of their patrimony yet constantly searching for fulfilment and pleasure and – deep down – for truth.”

From teaching, Ahmari returned to university and then entered the world of journalism, finding – in the process – his vocation as a columnist, political analyst and commentator.

At the same time, his encounters with a reality in which he had never believed began, bit by bit, to increase until one day, walking the streets of New York, he walked, on impulse (or so it seemed), into a nondescript-looking church run by Capuchin friars. The rest, as they say, is history.

This is a remarkable story. More importantly, Ahmari’s journey is the journey of precisely the generation with which the Church struggles to communicate.
These are the people running global media, universities and professions – ignorant of their patrimony and constantly searching for pleasure and fulfilment and – deep down – searching for a truth they can trust.

Yet the Iranian-born convert speaks in a language of radical concepts and offers a witness that outmatches ecclesial-committee speak by light years.

Ahmari – in other words – speaks to his generation in their own language, but also in a timeless way that makes his memoir appealing to every age and background.

Perhaps the Augustine comparison seems tenuous. But the reader will not be surprised to discover who the Iranian-born former nihilist chose as his baptismal patron.

Autobiography, Stuart Hood wrote, is an attempted jailbreak; the reader tunnels through the same dark. This jailbreak is a journey towards the light, littered increasingly with God’s little surprises – but this final decision of Ahmari’s is no surprise at all. 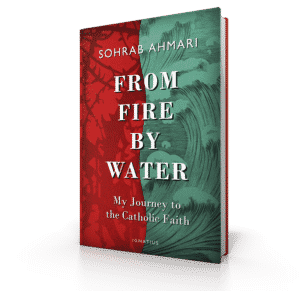