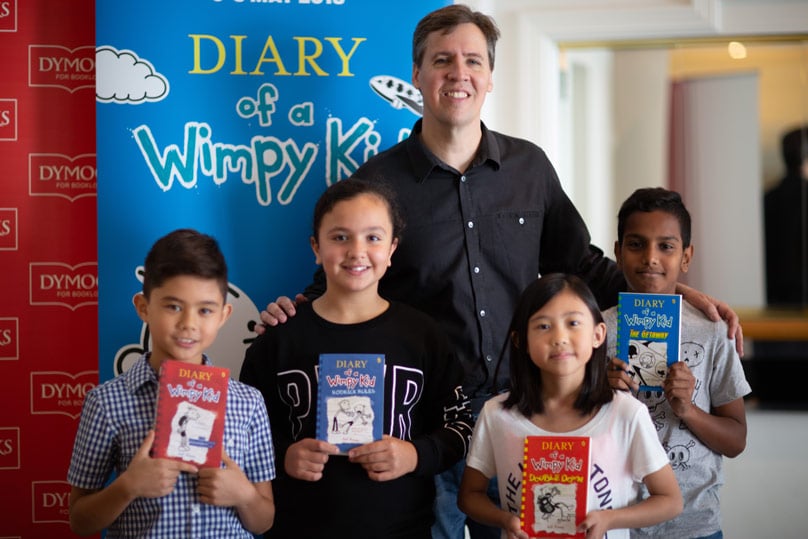 WIN a signed copy of Jeff Kinney’s latest book Diary of a Wimpy Kid – The Getaway. To be in the running email your name and contact details to [email protected]

One of the world’s biggest-selling children’s authors recently met with students from St Mel’s Primary School at Campsie – a school almost as culturally diverse as the languages his books are sold in.

In his only school visit during his Australian tour, Jeff Kinney delighted students with stories about the inspiration behind his Diary of a Wimpy Kid series, how he became a writer and even gave a crash course on how to draw the book’s main character Greg Heffley.

Originally a cartoonist, today Kinney has sold more than 200 million copies of the 12 books in the Wimpy Kid series, which have been published in 56 languages, including the first in Latin presented to Pope Francis.

With 95 per cent of St Mel’s students coming from a non-English speaking background and representing more than 45 countries, the visit was organised as part of the school’s ongoing partnership with leading publisher Penguin Random House to encourage reading for pleasure.

The children are not only treated regularly to author visits from the publishing house, they are also given proof copies of up-coming titles to check for spelling errors as well as to provide feedback on story-lines, characters and how the books should be promoted.

Assistant principal and motivator behind the partnership Chad Ferris said the school had already seen very encouraging results with the levels of reading displayed by the students due to the partnership.

“Due to the culturally diverse backgrounds of our students, getting them to actually read for enjoyment has been a challenge,” he said.

“So we are hoping our partnership with Penguin Random House and the opportunities we are providing will help them realise that reading isn’t a chore, it can be fun. 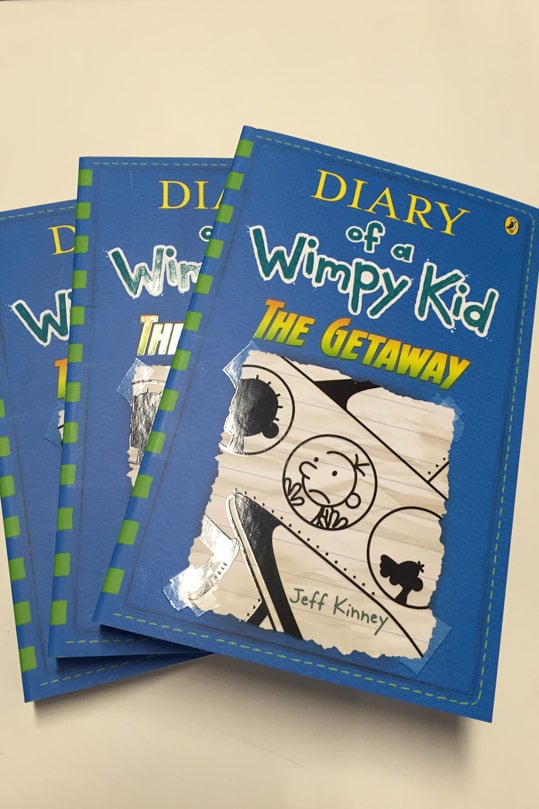 “And judging from the looks on their faces during Jeff’s visit, that’s exactly what it’s done.

“They screamed with laughter hearing his story as well as being inspired about his own journey and the many rejections he faced before finally getting his first book published.

“We hope his visit will help students to overcome any language barriers and know they can achieve anything.”

The charismatic author came up with the idea for Diary of a Wimpy Kid, a story about a school weakling almost eight years before showing it to a New York publisher.

Originally only an online comic strip, he signed a multi-book deal with publisher Harry N. Abrams, Inc. in 2006 and the first Diary of a Wimpy Kid book was published in 2007 and became an instant bestseller.

Dot Tonkin from Penguin Random House said the partnership developed with St Mel’s at Campsie has been a fabulous opportunity not only for the students but for them to gain a valuable insight into what motivates children to read.

She said the students are being given a fabulous opportunity to not only become proficient readers but to shape the type of books children will be reading in the future.

“Last year when we initially met with the kids, we gave them a catalogue of books they could choose to read, a big factor in kids reading is the empowerment of selecting something they are interested in,” she said.

“As St Mel’s has such a high percentage of students from non-English speaking backgrounds, many of the homes just don’t have books lying around for the kids to read so this was something very special for them.

“Our research has found that due to their backgrounds, a third of parents in Australia don’t feel confident enough to read to their kids in case they aren’t pronouncing words correctly so many children miss out on being read to when they are young.

“We want to help ignite that interest in reading and what we are doing seems to be working.

“As publishers we are always striving to make reading relevant for kids today so we need to know what’s motivating them and St Mel’s has been a great test case.”