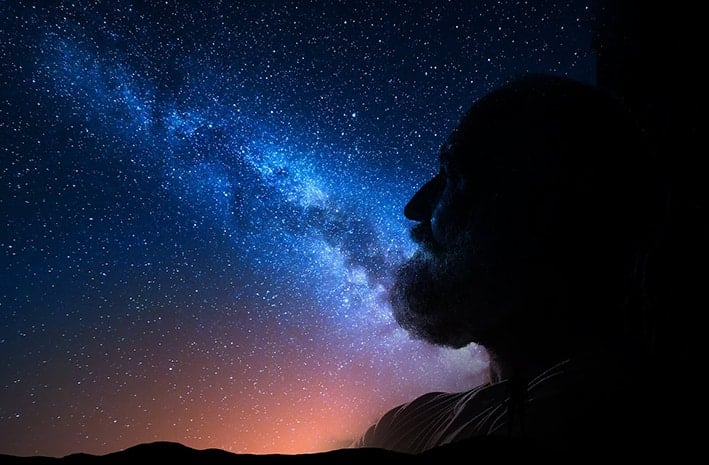 Why are you Jews gawking at the sky?

Well, because God told Abram, ‘Look up at the night sky, for your descendants shall be as many as the stars of heaven.’ Abram believed the Lord and this was reckoned to him as righteousness. (Gen 15:4-6)

Moses also said, ‘Look up to the heavens, and see the sun and moon and stars. Admire but do not worship them, for the Lord it was made these, and made you for his own people.’ (Deut 4:18-20)

David, too, looked to the heavens and saw the angel of the Lord with his sword drawn over Jerusalem. He did penance, so God would spare his people from their plague. (1Chr 21:16-17).

Why are you Christians gawking at the sky?

Which is why Christian priests to this day raise their eyes to heaven at the consecration.

And why the faithful, even great sport stars, often look upwards when they pray. ‘Why are you men from Galilee standing there gawking at the sky?’ the angels asked (Acts 1:1-11) And still we stare.

The Ascension is also a kind of homecoming

Is it just nostalgia? In a sense, yes. St Thomas Aquinas teaches that the history of salvation is essentially one of God’s exitus and reditus, His comings and goings, especially the Son leaving heaven in Christ Jesus to dwell among men, before returning to the right hand of the Father. However sad it was for those left behind, the Ascension celebrates a homecoming for Jesus (Jn 16:5,10,17,28; 17:11,13; 20:17). As His mission began with kings and shepherds looking up to the skies, it comes now full circle with apostles-made-shepherds also gaping upwards. People gawking at the heavens bookend the Gospel.

Which is an interesting part of Jesus’ story. But why do we, too, feel nostalgia for heaven? Why do we talk of someone who has died “returning to the Father” or “going home” when they’ve never been there before? Well, Aquinas explains, those goings and comings of the persons of God that theologians call ‘processions’ and ‘missions’ are also the principle of our creation and redemption, identity and mission, destiny and completion. If we are made from heaven, we are also made for heaven. Heaven is our homeland.

On great feasts like this one you might notice some tweaking of the First Eucharistic Prayer. You can expect today an inclusion like “Celebrating that most sacred day on which your Only Begotten Son, having completed his mission on earth, returned to his throne of glory at your right hand”. But no, the focus even here is on what it does for us: “Celebrating the most sacred day,” the prayer declares, “on which your Only Begotten Son, our Lord, placed at the right hand of your glory our weak human nature, which he had united to himself”. You see, God the Son didn’t leave the heavenly realm, assuming the form of a servant, for some cosmic tourism. It was for our sake, so He could take us back with Him. 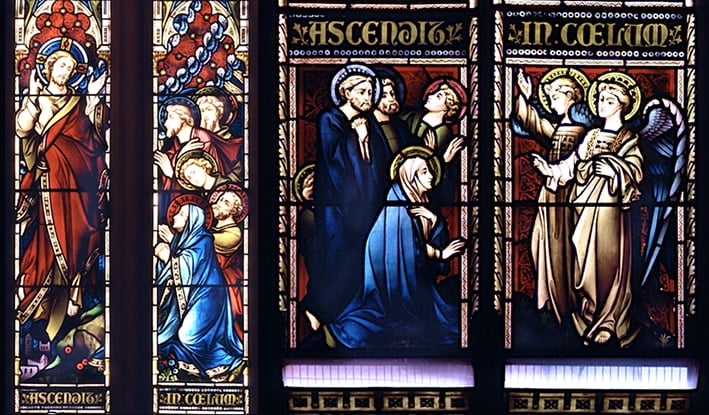 Thus in the Ascension window of our cathedral, as the disciples watch Jesus flying through the air, He is not looking towards the Father above but to us below, with love on His face and blessing in His hand. And in the little scene beneath that window we see the two angels encouraging the grieving disciples, “Why are you guys gawking at the heavens? Jesus has ascended but He will return to take you with Him.”

What to do in the meantime? Consumed by nostalgia, we could easily just keep staring toward heaven and give up on this earth. But had father Abraham done that, he’d have had no descendants at all, let alone a whole night-sky’s worth of Jews and Christians. If teacher Moses had remained sky-gazing, we’d all be mired in astrology and nature worship, as he warned. If King David had kept focused on heavenly visions, he might never have repented and saved his people from plague. If the magi and shepherds had kept looking upwards, they would never have seen the Christ child in the manger below. If the apostles had focused only on higher things, they would have neglected to bring the deaf-mute and dead Lazarus to Jesus. And if Jesus Himself cared only for the things above, He would never have condescended to leave us His Body and Blood in the Eucharist.

This is the edited text of the homily by Archbishop Anthony Fisher OP for the Mass of the Solemnity of the Ascension of the Lord, Year A, livestreamed from St Mary’s Cathedral, Sydney, 24 May 2020.