They’ve brought some of the biggest names on the international Catholic speaking circuit to Australia, including Jason Evert, Christopher West and Tim Staples, to name just a few.

Yet four years ago Charbel Raish was unsure whether the organisation he founded—Parousia Media—would continue. Financially the organisation was struggling and he and wife Christine were expecting baby number five.

So he prayed to God, “If you want, show me a sign.” He prayed that if God wanted Parousia Media to continue that world-renown Catholic theologian Scott Hahn would agree to their invitation to come and speak to audiences in Australia. It was a long shot.

The very next day he received a phone call from financial planner and committed Catholic, Kevin Bailey, who said, “Scott Hahn told me to call you.” Hahn was interested in coming to Australia.

The next issue was funding. If God wanted Parousia to continue, fine, but where was the money going to come from?

On day one of his novena, Redfield College in Dural—where Charbel worked as a teacher—offered him a room at the school to use free of charge as Parousia’s headquarters.

Soon after, when he met up with Kevin Bailey to discuss Hahn’s visit to Australia, Kevin asked him, “How can I help? Rather than donating, how about we go partners?”

In July 2014 Parousia Media was officially established as a company with both Charbel and Kevin as directors. Kevin promotes the work of Parousia in Melbourne, and Charbel in Sydney.

It was highly providential, Charbel says, that the determining factor had been Scott Hahn.

It had been a simple cassette tape of Dr Hahn speaking on scripture that had led Charbel to found Parousia Media in the first place.

In the year 2000—before the advent of CD’s—someone gave Charbel a cassette tape of Hahn speaking on how to “Deepen Your Faith with Scripture”. At the time the 19 year-old was hungry for solid formation in the Catholic faith.

“I fell in love with Scott Hahn,” he said. He got in touch with the US company that had produced the tape—St Joseph’s Communications—in order to purchase more tapes. However, the company suggested he consider becoming a distributor.

One thing led to another and before he knew it Charbel was selling tapes from his own lounge room.

He set up a website and named the business name Parousia Media, “Parousia” being the Greek word for the second coming of Christ.

The company was launched in 2005 and as technology advanced he progressed from cassette tapes to CD’s and DVD’s and eventually branched out into books.

Things really took off when popular US Catholic apologist and evangelist, Tim Staples, agreed to come to Australia as Parousia’s guest speaker in 2009. Post-World Youth Day Catholics in Sydney were eager for more formation in the faith and they flocked to Staple’s talks.

“Over 6,000 people in six days came to Tim Staples. It was phenomenal.”

Over 1500 came to Staple’s talk on Islam at St Charbel’s in Punchbowl.

“Hundreds of people came up to me and said, ‘Thank you, this has changed my life’. That was affirmation. It was confirming. So we ran more and more events. There was this hunger.”

When things died down a little in 2013 Charbel once again thought perhaps Parousia had run its course and it was time to move on to something else. But once again God sent inspiration to continue.

An email out of the blue from acclaimed Catholic speaker and author, Chris Stefanik, gave him a much needed boost.

“He had no idea that I was thinking of giving up in 2013 and he said, ‘How’s the busiest guy in the southern hemisphere going? Listen brother, I’ve been thinking of you, praying for you. Don’t give up what you’re doing. Keep going, the Church needs you’.”

At a fundraising event the same year for those affected by the hurricane in the Philippines, Charbel says he was inundated with affirming and supportive feedback about Parousia. 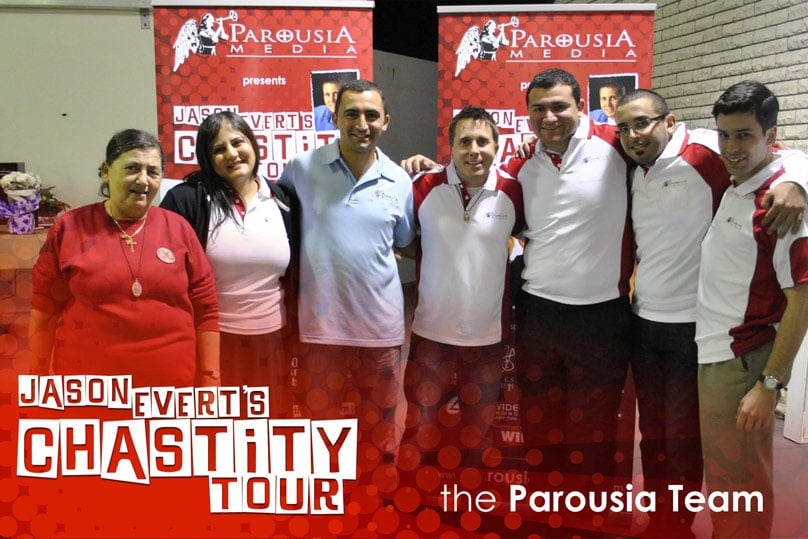 “There was overwhelming support, people saying, ‘The CD’s changed my life, don’t stop, keep going’. Dozens and dozens of people.”

It was soon after that Charbel asked God for a sign—Scott Hahn agreeing to come to Australia—and that Kevin Bailey offered to become a partner, further cementing Parousia’s future.

Charbel committed himself fulltime to Parousia in 2016 and began growing the team. Annual fundraising dinners have seen the likes of Tim Staples, Christopher West and Dr Edward Sri attending as keynote speakers.

Charbel has seen the company expand dramatically from its humble beginnings when he mailed out resources from his own lounge room.

“I knew I just wanted to spread the Good News, the Gospel. I didn’t know how. I started giving tapes away and realised people wanted more and more resources.”

Charbel considers that the partnership with EWTN forged in 2017 signifies the next phase for Parousia. “God has opened another door,” he said. This exciting new phase will involve live-cross interviews and eventually documentaries produced by Parousia for EWTN.

“We look at it on a national level and bring together the resources and the speakers. Now we’re moving into study groups, which is exciting.”

“We’re now in 100 parishes with parish stands and over 200,000 people have been reached and over a quarter of a million resources distributed.”

“We’ve made it our mission statement that we want to go across the whole continent and leave no stone unturned. Every parish, every priest, every school will know this material exists. And we hope and pray that as many of them as possible will take it on board.”

To find out more about Parousia Media: parousiamedia.com

Parousia Media’s 2018 Fundraising Dinner will be at 7pm on Friday 29 June at the Epping Club, 45-47 Rawson Street, Epping. Book your tickets now at parousiamedia.com

Related story:
Parousia Media Founder – ‘I returned to the faith after Jesus questioned me’

Home where the heart is for Tyburn Nuns

Parishes an ideal support for the sick