Three Plenary observers tell of their experiences so far

In the lead-up to the Second Assembly, lay observers of the Plenary Council remain hopeful that the laity will continue to be heard and will be called to further deepen their faith.

Stephen Noone, a 28-year-old parishioner of St Joseph’s Newtown, was involved in the listening stage of the Plenary Council and helped to train parish ambassadors.

“Our group was pretty good, there were a lot of people who were pretty enthusiastic about wanting to get out there and engage,” Mr Noone told The Catholic Weekly.

“I think there was some general skepticism, as you would probably expect, about what kinds of things would be coming from this process. I was kind of just happy to do the job! I was neither here nor there in terms of excited or disillusioned.”

the role of the laity is very important. We have to own our faith, and the propagation of that rather than just relying on the priest, who’s got enough to do. – Stephen Noone, Newtown parishioner

During the lead up to the First Assembly Mr Noone also assisted in running retreats during lockdown, “to continue the Plenary journey”.

He said he was “actually quite encouraged” about the direction the Plenary Council has taken since the First Assembly. “Seeing the fruit of the first assembly I think there’s some good grounded thinking. It’s not just airy fairy, ‘We need to be better people’.”

Mr Noone was especially grateful for the renewed emphasis on living the Baptismal call more fully. “That looks like personal conversion, mission in the parishes, evangelisation and a call to deeper prayer. I really appreciated that – it’s fairly foundational I should think,” he said.

“As far as I’m concerned, the role of the laity is very important. We have to own our faith, and the propagation of that rather than just relying on the priest, who’s got enough to do. I find that kind of exciting.”

Ann Kerley, a parishioner of All Hallows Five Dock who was also a parish ambassador, said she was encouraged by the way the Plenary gave people a chance to speak but was concerned that the process has led to “beige statements” and has run out of steam due to COVID.

Mrs Kerley’s parish of All Hallows has had a high turnover of clergy in recent years, which when added to the effect of the pandemic has “taken its toll” on the community. She said that she poured a lot of effort into promoting the Plenary Council in her parish in its listening stage, because she saw it as an opportunity to revitalise the parish and work as a “springboard” for future efforts.

“People had a chance to speak. It woke people up, in a way,” Mrs Kerley said. She also started “enrichment groups” and other missionary activities, including Catechism study, Lectio Divina and video nights based on Bishop Robert Barron’s popular Catholicism series. After the pandemic began to bite, she started a Facebook page to maintain interest but found further calls for feedback to be frustrating.

“I couldn’t in all honestly justify calling groups again. I myself, who am very interested in the Synod and the Plenary,” she said.

She was also disheartened that submissions for the Synod on Synodality only allowed 250 words for submissions, despite the amount of effort to remain engaged being so high. “There’s a lot of reading. It’s exhausting!” Mrs Kerley said.

Mrs Kerley told The Catholic Weekly that she has become disillusioned with the direction the Plenary has taken, because “everything points to worrying tendencies to loosen the Catholic Church’s approach to different groups”.

“We want teaching as Christ taught it. We want definitive teaching. That’s what wrong,” she said. “They’re talking about, ‘My dream, my dream for the church.’ This sounds like I’m extreme, and I’m not because I see the point of the Synod, of the Plenary. But the stuff of dreams is fantasy, rather than having a concrete basis.

“These nebulous kinds of statements make me suspicious. It is just so easy to say that these thoughts are coming from being led by the Spirit. Not necessarily!”

Dr Lisa Buxton, Executive Officer of the Sydney Aboriginal Catholic Ministry, said her role during the Plenary has been “making sure Indigenous voices are heard in this process”.

She has been involved in making submissions, working with parish ambassadors and holding listening sessions at the Reconciliation Church in La Perouse, Sydney.

“We’re the youngest and fastest growing Catholic population in Australia – there’s about 130,000 Indigenous Catholics across the country. It’s also about listening to the younger people as well, what they think is important,” Dr Buxton said.

She wants Indigenous youth to see an increase in visibility across the church: in liturgical services, university chaplaincies, parish youth groups, Catholic schools. “You can’t be what you can’t see,” Dr Buxton said. “It’s being inclusive of that, seeing that their culture is valued in all of the structures of the Church.”

People had a chance to speak. It woke people up, in a way – Ann Kerley, Five Dock parishioner

The Plenary Council organisers have taken pains to include acknowledgements of country and extensive references to Indigenous Australians in Plenary documents.

“But it’s important to see it beyond that, as well,” Dr Buxton said. “It would be nice to see that every Diocese had an Aboriginal Catholic ministry, but that’s not the case as yet.”

Dr Buxton supports proposals to foster inclusion of Indigenous spiritual expressions in the Church’s liturgical services, and of Aboriginal people on decision-making bodies of the Church “at different levels and with different structures”. She references St John Paul II’s statement that Indigenous people are still waiting to have their contribution “joyfully received” by the rest of the Australian Church.

“We’re still asking permission. We’re all Baptised within the Catholic Church, so we don’t want to take away from the liturgy, we just want to add our elements of cultural expression to the celebration of the Mass,” Dr Buxton said. 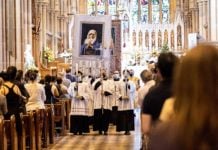 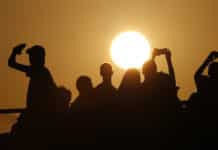