On 27 July the National Centre for Pastoral Research and Christian Research Australia held a webinar to break down the 2021 Census Data, with former CRA director Professor Philip Hughes analysing some of the major trends. Here are some of the main messages.

Christianity is nose-diving in regional Australia

The number of Christians in Sydney declined by 10.1 per cent, and in Perth 11.4 per cent. Not such a big difference.

Outside Sydney, the rest of NSW recorded an 18.7 per cent decline, whereas regional Western Australia dropped by a whopping 32.7 per cent.

While Western Australia is the most dramatic example, this pattern was seen across the nation: the regions are declining much faster than the capitals.

This partly explains the collapse in regional Australia’s Christian share – most migrants are coming to live in the capital cities.

The percentage of Catholics as a share of population has remained relatively stable in the last century, but might be set to change

We’re currently sitting at 20 per cent, the latest instalment of a steady decline from the 1991 peak.

For the entire history of Australia the total number of Catholics has also kept rising until 2011: from one million in 1911, to 5.4 million in 2011.

That is, until the last decade, when our total numbers have begun to slowly decline – since 2011 we’ve lost around 300,000 total Catholics – and the decline in overall population share is matched by a downward trend in the total number of Catholics. 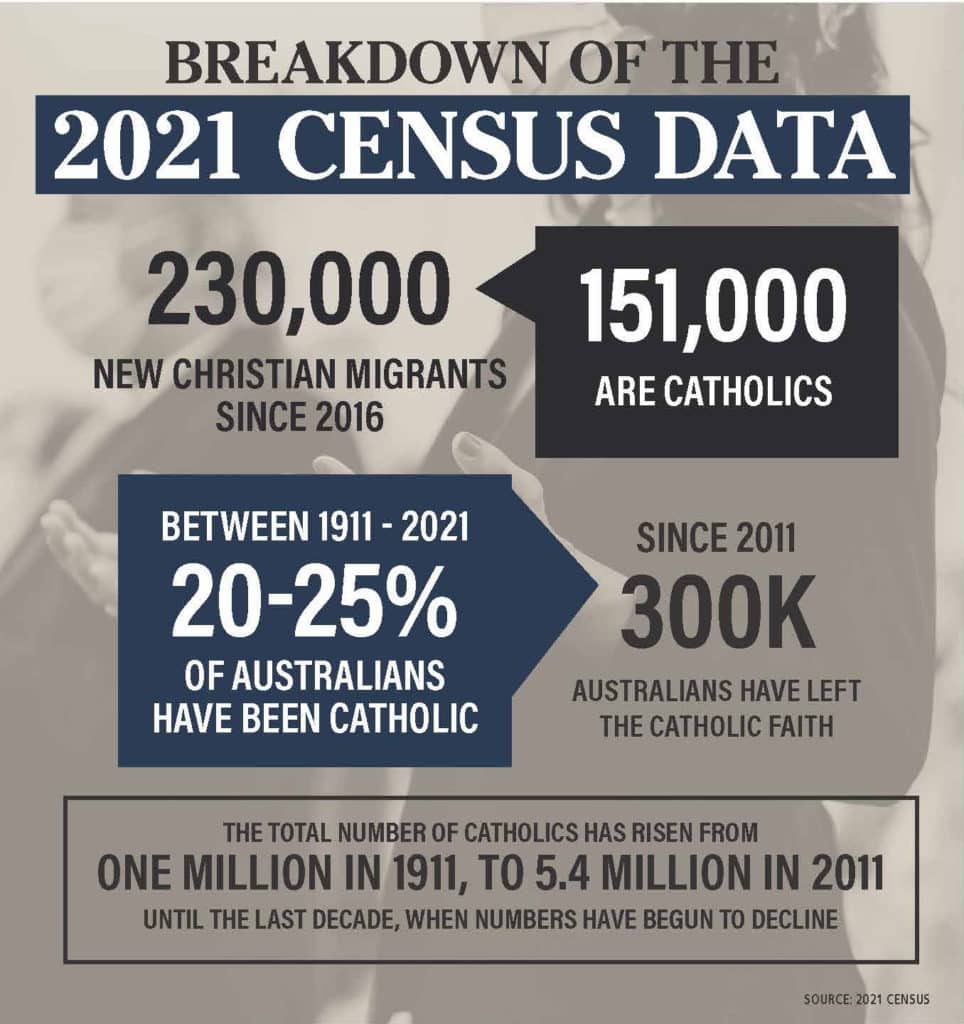 The Churches are getting older, but disaffiliation is true across the board

The Census showed that affiliation among young adults is the lowest of any age group.

The Churches are getting older, and as “nominal” Christians of all denominations experience less cultural pressure to remain in Church, they change their affiliation to “no religion” and decline to baptise their children too, meaning the share of children affiliated as Christian is shrinking.

“There’s been a decline right through all age groups in terms of identification with the Christian faith. It’s not just a cohort thing, but has been a very broad culture change that’s occurred,” Professor Hughes said.

“Scholars around the world are currently grappling to make sense of emerging evidence about religious trends for different age groups, which on the surface, can appear counter-intuitive or paradoxical.”

But are the kids alright?

In mid-June NCLS Research released data from the 2022 Australian Community Survey, which found that across the Christian denominations young adults between 18-34 attend Church at least once a month at a higher rate than their grandparents (32 per cent compared to 19 per cent of over-65s).

They also attended more frequently, with 15 per cent of young adults attending up to three times monthly compared to two per cent of their grandparents.

These data seems to cut across the Census’ report that religiosity had cratered among youth, but Dr Ruth Powell from NCLS Research told The Catholic Weekly that harmonising different datasets on religious observance was not a simple problem.

“Scholars around the world are currently grappling to make sense of emerging evidence about religious trends for different age groups, which on the surface, can appear counter-intuitive or paradoxical,” she said.

It may be the case that older generations have larger numbers of nominal Christians, with youth affiliation representing a smaller overall share of more devoted adherents – but further research will be necessary.

According to Professor Hughes Australians are leaving the Church to pursue a vision of life defined by personal fulfilment, rather than obligation to family.

“The Christian faith has supported strongly the focus on family life, but hasn’t been seen to support in the same way this sense of personal fulfilment and the diversity of lifestyle and sexual orientation that’s been implied by that,” he said.

Rather than attributing responsibility to individual communities, denominations or priests, we are seeing a culture-wide shift in how people are searching for meaning.

As a result, “we cannot turn the ship around by improving services or pastoral care,” he said.

“The Christian faith has supported strongly the focus on family life, but hasn’t been seen to support in the same way this sense of personal fulfilment and the diversity of lifestyle …”

Professor Hughes noted that denominations that demanded high levels of involvement from adult adherence tended to attract and retain members (or at least not bleed them as quickly as others).

His remarks echoed those of Pope Emeritus Benedict XVI who said in the late 1960s that the Church, as it declined, would “make much bigger demands on the initiative of her individual members”.

This year will see two further Christian data releases, with the Mass Attendance Report and National Church Life Survey still to come before the end of the year.