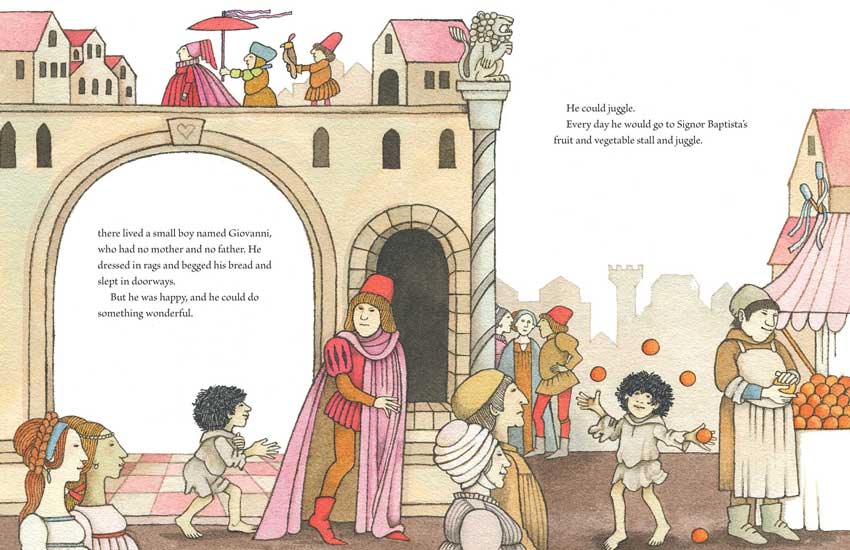 Last week, I read Tomie dePaola’s wonderful story, The Clown of God, to my faith formation class. (If you don’t own the book, you can hear and see it read aloud in this video.)

Before I read the book, I prepped the class a bit. It happened to be my daughter’s birthday, as well as the last class before Christmas, so we talked about birthdays and presents. To my relief, they all knew that Christmas is Jesus’ birthday.

Most of them were baffled. Then a few hands shot up.

“Love!”  said one kid. I smiled and nodded, and wrote that down on the white board.

He laid the words out flatly, like a card dealer mechanically snapping cards out on a table. He had clearly heard them a thousand times before, and knew how to say the thing the teacher wants you to say: Jesus wants us to love one another. Jesus likes community. Jesus likes service. Some of these kids are barely in contact with anything religious, but others have been in Catholic school since they were tiny, and at the tender age of eight, they are full to the brim with jargon.

So I read them the book. The story goes like this: In Renaissance Italy, a ragged street boy discovers he has a talent for juggling, and so that’s how he earns his living. His complicated routine always ends with a rainbow of balls and then “The Sun in the Heavens,” a single golden ball that he tosses impossibly high.

He rises to fame and enjoys his life; but eventually times get hard, people get tired of his act, and his age starts to show. He even drops the golden ball, and the crowd jeers. So he gives up juggling and stumbles back to his old hometown. A weary beggar, he takes refuge in a dark church and falls asleep. He wakes up in the middle of the night to blazing lights and music, as a procession of villagers and religious present Christmas gifts before an ancient statue of Mary and the Child Jesus.

When they are all gone, he gazes as the somber figures, wondering why the child doesn’t look happy. Then he remembers that he once made children smile, so he suits up and goes into his old juggling routine one last time. He works his way through all his tricks, and finishes with the rainbow of colored balls. Finally he adds “The Sun in the Heavens.” He juggles it higher than ever before and cries out, “For you, sweet child, for you!”

And then his old heart gives out and he falls dead to the ground. A sacristan finds him and calls a priest, who blesses the old man’s body.

But the sacristan backs away in fear: The child Jesus is smiling, and in His hand, He holds the golden ball.

My voice only cracked a little bit as I read to the spellbound class. It’s a fantastic story in itself, and the pictures are glorious; but I love it because that idea of the golden ball has come to my rescue more than once.

Imagine crying out, “For you, sweet child! For you!” and offering to the Holy Child . . . community. What does that even mean?

So when the kids offered the ideas of “community” and “service,” I wrote the words out on the board, and then I asked them, “So what does this look like?”

They were stymied again. I prodded a bit. “What does it look like when you love someone? How do you know someone loves you? How do people know you love them?”

“HUGS!” one girl yelled out. That was a good one! Personal contact is a sign of affection that kids understand.

“And kisses!” shouted another. That went on the list. So did, “Say your prayers!”

And there it was. His golden ball: Giving what you have to someone you love, to make them happy. And that makes Baby Jesus happy.

Another kid volunteered, “I can watch the baby for my mom!” and another one giggled, “AND NO WHINING!” That was a good one, because it showed that he was clearly thinking about his own actual life. Someone he actually knew had told him to stop whining, and he could see that listening to that request was something he could do to make that person happy. It’s what love really looks like. Every time they came up with

I kept pushing: What can we do today for the people we love, to make them happy? Another kid said, “Nothing that has to do with cleaning!” Okay, it was my kid who said that.

And that was good, too, because it showed that she was thinking concretely about her actual life. She wasn’t letting her thoughts about Jesus and love get garbled with a lot of abstract catch phrases about service and community. She was thinking, “It would make my mother happy if I picked up my smelly clothes.” It would be even better if she went ahead and picked up her smelly clothes; but at least she was being honest about what she could actually accomplish.

This isn’t just something kids should push themselves on. I regularly fall into the habit of compartmentalising my faith and falling back on jargon, and excusing myself from concrete action. It’s the Catholic juggling routine: We speak in the jargon of religious expression one minute, and then next minute acting in a way that has nothing whatsoever to do with real love.

I will gaze at a crucifix and remind myself that it was my sins who made those wounds; and then I’ll scowl at the person who’s blocking my way out of the pew. I will thank God for the wonderful gift of the Incarnation, and then tell my kid I’m not in the mood to fix some lemonade, and she can just go get herself some water.

It only gets worse when there’s a religious holiday, like Christmas, where actual love in action can easily get shuffled away in all the hustling and costume changes and juggling and fuss.

But you can stop for a moment. You can ask yourself, “What do I actually have, that I can give to someone else? How can I show love, to make the Child happy?”

I can apologise sincerely to someone if I was rude.
I can let a bit of rudeness pass without comment or retaliation.
I can put down my phone and give my full attention to the person in front of me.
I can let someone else pick the radio station.
If a street person asks for one dollar, I can give him five.
In the middle of a busy day, I can stop and pray for someone, or give a word of encouragement, before I go on with my juggling routine.

These are the things I have to give, and I can give them, to make the Child happy. Most days, this is what love actually looks like: Little things, little sacrifices, little gifts. A little golden ball for the birthday child. I can toss him a golden ball. He will catch it, and smile.