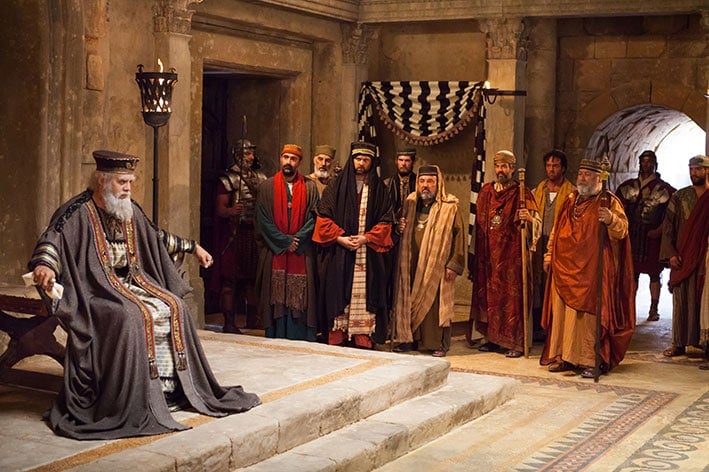 It being Epiphany and all, I thought it might be good to spend a bit of time on the story that Matthew related concerning both Herod and the Magi.

The death of Herod is one of the points in time by which we calculate the birth of Jesus. Many scholars have placed it sometime before 4 BC since Herod was thought to have died near the occurrence of a lunar eclipse in March of that year, But Scripture scholar Michael Barber points to recent scholarship that links the death of Herod the Great with an eclipse that occurred in 1 B.C. According to Barber, “This would fit in well with the witness from the earliest Christians, who believed that Jesus was born between 3 and 2 B.C.”

Whatever the case may be about the dating of his death, what matters more here is the manner of it. The Jewish historian Josephus tells us that Herod was so concerned that no one would mourn his death, that he commanded a large group of distinguished men to come to Jericho, and then ordered that they should be killed at the time of his death so that the displays of grief that he craved would take place. Happily for them, the order was not carried out. But it is a measure of the man that he gave the order, and a clue as to why he was so paranoid about the birth of Jesus.

Herod’s extreme reaction to announcement of the Magi and his slaughter of the children of Bethlehem strikes many modern people as so far-fetched that some have charged Matthew with inventing the story. But closer inquiry into the biblical and historical evidence about Herod tells a different tale. We know, even from non-Christian sources, that Herod was indeed profoundly paranoid. He had his own wife and children put to death to protect his throne (whereupon Caesar Augustus, who granted Herod his puppet kingdom, remarked, “It is better to be Herod’s swine than his son”). But beyond this psychological evidence, there is in Scripture itself a reason why Herod reacted so ferociously to the news of a newborn “king of the Jews”.

Herod, the king of the Jews, was not a Jew. He was an Edomite, or Idumaean, as they had become known by the time period immediately preceding Christ. Edomites were descendants of Esau, Jacob’s brother. Jacob, you will recall, received the blessing and birthright from Isaac that Esau was supposed to get (Genesis 27). And there was rivalry between the brothers (and their descendants) ever afterwards. When Israel escaped from Egypt and was coming toward the promised land, Moses requested passage through the land of Moab (which was a people closely allied with the Edomites) and was refused. In fact, the Moabites tried to destroy Israel. But before they did this, the Moabite king, Balak, hired Balaam the prophet to curse Israel (Numbers 22-24). However, as hard as Balaam tried he found he could only bless the Chosen People.

What is significant about this is Balaam’s third blessing. For he declared (in a prophecy that was, by Herod’s time, widely regarded as messianic), “I see him, but not now; I behold him, but not nigh: a star shall come forth out of Jacob, and a scepter shall rise out of Israel; it shall crush the forehead of Moab, and break down all the sons of Sheth. Edom shall be dispossessed, Seir also, his enemies, shall be dispossessed, while Israel does valiantly. By Jacob shall dominion be exercised, and the survivors of cities be destroyed!” (Numbers 24: 17-19). “Edom shall be dispossessed” by a “star… out of Jacob.” Would a paranoid Edomite king with Herod’s psychological track record be unnerved by the words of the Magi, “Where is he who has been born king of the Jews?” and their report of a star? You bet he would. Would he hesitate to slaughter the children of a few nameless peasants in an obscure village if he thought it would protect his throne from being “dispossessed” when he was willing to slaughter his own sons? To paraphrase Augustus, in such a situation, it would be better to be Herod’s son than Herod’s subject.

Small wonder the author of Revelation remembers him, not as a man, but as a dragon and scarcely distinguishes him from Satan. He is the prototype of every murderer of martyrs in history, just as his infant victims, who never knew for what they died in this life, are remembered as the first saints of the New Covenant to enjoy forever the bliss of heaven with Christ.

Which brings us to the Magi.

Due to the influence of the Christmas carol and popular legend, many people think the Magi were “Three Kings”. But were they? How did they attain their legendary crowns and fixed number of three when Matthew says nothing of the sort?

The number part is pretty easy: three gifts, three kings. As to their alleged royalty, this is more complicated. The historical magoi appear to have been a priestly caste in eastern lands. The Greek historian Herodotus tells us Magi were the sacred caste of the Medes. And Jeremiah refers to one of these eastern priestly figures, a Nergal Sharezar, as Rab-Mag, “Chief Magus” (Jeremiah 39:3, 39:13). Magi had long been involved in the various religious and political struggles of Persia and their influence continued through the Assyrian, Babylonian, Persian, and Parthian empires. By the time of Jesus, they had long provided priests for Persia and been a major religious influence. One ancient writer named Strabo says Magian priests formed one of the two councils of the Parthian Empire. Fans of The Mummy will be disappointed to discover there is no evidence to show that Magi were ninja assassins tasked with guarding the tomb of the evil Egyptian Imhotep and preventing him from rising and taking over the world – perhaps because Babylon is a long way from Egypt and the two Empires were not big fans of each other.

Magoi is, of course, related to our English word, “magic” but it is not quite accurate to speak of them as “magicians”. They lived in an age which had not distinguished between the attempt to control and understand nature by what we now call “science” from what we now call “magic”. They believed, like most people of their age, that everything was somehow connected and they suspected the connection involved the movements of the heavens. So they practiced astrology and tried to understand the meanings of the stars. But we might just as easily say they practiced the rudiments of astronomy as well.

In fact, the gifts they gave were gifts of their work, for these things were used by learned men of the time to measure, to make ink, and to offer prayer for wisdom in their studies. In addition, Fr. Raymond Brown notes in his Birth of the Messiah that these gifts may have been used in magic rituals. We can therefore see in their gift both the possibility of a renunciatory act (of their former pagan beliefs) or of the best they had to offer of their learning (in homage to the newborn King). Further, we can see in their gifts a theological significance since, for Matthew, gold signifies kingship, frankincense priesthood, and myrrh death. In this way, the gifts of the Magi spoke more than they themselves knew about the sacrificial death of the Son of David and Priest According to the Order of Melchizedek.

Subsequent Christian theology saw in the Magi the very first Gentiles to respond to Christ. Indeed, this could be the source of the legendary royalty of the Magi, for the Church’s liturgy coupled Matthew’s story of them with a verse from Psalms which read, “May the kings of Tarshish and of the isles render him tribute, may the kings of Sheba and Seba bring gifts!” (Psalm 72:10). Of course, the Magi were no more from Tarshish (to the northwest, not the east, of Israel) than they were kings, but as sometimes happens, a liturgical accommodation of a text eventually came to be looked upon by some as an authentic interpretation of the gospel. In reality, however, the Psalm was meant to express the spirit of the Magi’s homage to Christ, not to teach politics or geography – the spirit of celebration over the firstfruits of Christ’s harvest among the Gentiles.