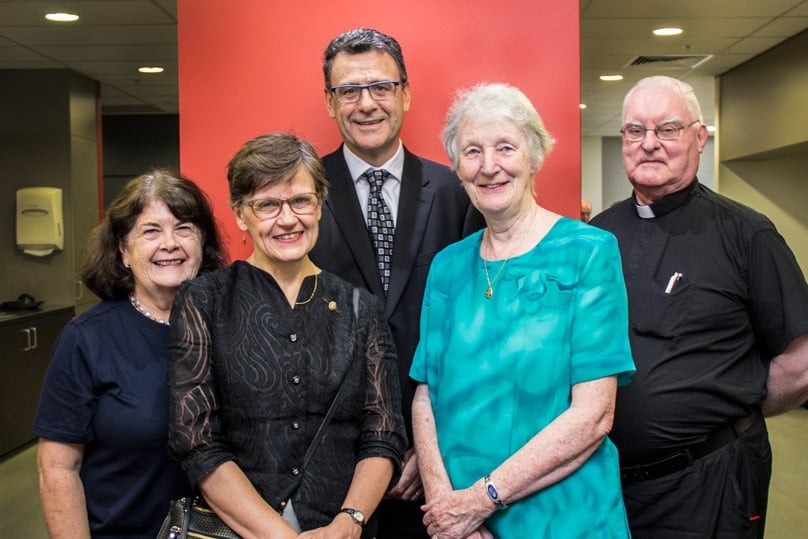 A new stream of study has been launched in Sydney to answer what one academic leader has dubbed “the most pressing need of the Church right now”.

The Broken Bay Institute’s (BBI) new offerings in Governance and Canon Law were unveiled to the enthusiastic applause of an intimate gathering of professionals on 20 March; a gathering which included some of the most influential people working in either field in the Church today.

Eminent Canadian canonist Fr Francis Morrisey OMI, a man who had a hand in the formulation of the current Code of Canon Law (1983), said he was extremely happy to launch the stream on BBI’s behalf, saying that the new offering reflected the changing landscape of legal structures in the institutional church.

Available at graduate certificate and graduate diploma levels, Governance and Canon Law now takes its place as one of four pillars in BBI’s offerings to students, alongside Leadership and Theology, Religious Education and Theological Studies.

The new stream is the outcome of two years’ consultation, in which BBI asked Catholics throughout Australia to nominate the areas of study that would best help them to fulfil their roles in the contemporary Church.

In his brief remarks, Fr Morrisey explained that the canonical entity, the Public Juridic Person – to which many religious congregations had transferred their former missions in healthcare, education and social services – was typically operated “according to the vision, the values and the mission of the institution in line with the teaching, the discipline and the laws of the Church” (a phrase more or less ubiquitous in governing documents).

The new study stream reflected the necessity and interrelated nature of those six elements – vision, values, mission, teaching, discipline and laws – to governance.

“For a Catholic institution today, the teaching very often is found in the social doctrine of the Church – the concern for each person,” Fr Morrisey said.

“We’re looking at, ‘How can we change the world (into a place) where the dignity of each person is respected?’”

Academic Dean Prof Anthony Maher praised the Institute’s CEO Gerard Goldman for his “passionate commitment to the Australian Church,” and described BBI as an academic institution that is committed to the vision of Vatican II and to an interconnected approach to study.

In his remarks, Mr Goldman recounted that five years ago there wasn’t a lot interest when BBI first floated the idea of a course in Governance and Canon Law, but that recent events had resulted in a change of understanding:

“Now if we said what’s the most pressing issue on the Church right now, and I suspect now for the next 10 or 20 years, it will be governance.”

More information is available at www.bbi.catholic.edu.au