About 10 days before he was expected in Rome, US Secretary of State Mike Pompeo tweeted that the Vatican “endangers its moral authority” by considering an extension of its 2018 agreement with China on the nomination of bishops.

Pompeo’s tweet on 19 September linked to an article he wrote for the magazine First Things asking the Vatican to use its “moral witness and authority in support of China’s religious believers.”

“Vatican diplomats are meeting this month with their CCP (Chinese Communist Party) counterparts to negotiate the renewal of a two-year-old provisional agreement between the Holy See and China. The terms of that pact have never been publicly disclosed; but the church’s hope was that it would improve the condition of Catholics in China by reaching agreement with the Chinese regime on the appointment of bishops, the traditional stewards of the faith in local communities,” Pompeo wrote in the article.

He summarized his point in the tweet, saying “the CCP’s abuse of the faithful has only gotten worse. The Vatican endangers its moral authority, should it renew the deal.” The Vatican did not publicly respond to Pompeo’s tweet or article.

“If the Holy See made such a comment about US relations with a state, I can’t imagine Secretary Pompeo would be happy,” a former Vatican official, not authorized to speak on the record, told Catholic News Service on 21 September.

He also pointed out that the Holy See’s negotiations and agreement are with the Chinese government, not the Chinese Communist Party, as Pompeo suggested. Arguing they are one and the same would be like claiming treaties negotiated with the Trump administration “were with the Republican Party. It makes no sense.”

As for the heart of Pompeo’s argument — that the agreement has not ended persecution of Catholics in China — the former official agreed, but pointed out that the situation for Catholics varies “depending on the province they live in. For some, it is better. For others, it’s the same. And, unfortunately, for some, it’s worse.”

Vatican always has insisted that dialogue is a process

But the Vatican always has insisted that dialogue is a process and walking away from the table because the other side does not give you everything you want at the beginning is more akin to attempting a business transaction than dialogue.

“This agreement is the fruit of 30 years’ work; we’re not going to just rip it up,” another Vatican official said, asking that his name not be used. He said the Vatican was surprised that Pompeo’s article in First Things was “so substantial,” detailing situations of alleged violations of human rights.

But even more, he said, “we were surprised given that he’s coming here at the end of the month and we expected to have substantial discussions on this. It’s not the approach most diplomats would take” when setting an agenda for a high-level meeting. Calling Pompeo’s article and tweet “megaphone diplomacy,” he said that it was not completely unusual for the Trump Administration.

At the same time, he said, the Vatican does not believe it is “just rhetoric,” citing Pompeo’s allegations of the forced sterilization of Muslims in Xinjiang, a region where there are few Catholics, so the Vatican has no direct information.

Many observers in the Italian press saw Pompeo’s tweet and article as more partisan politics than diplomacy.

The Italian journalist Gianni Riotta tweeted in Italian, “How does Secretary of State Pompeo prepare for a summit at the Vatican with @Pontifex? Attacking him on China. Will this muscular approach work with the church of Francis? No.”

Australian Archbishop Mark Coleridge of Brisbane replied to Riotta’s tweet by saying, “Nor will an attempt to pressgang the Holy See into a questionable domestic political/electoral agenda playing itself out on the international stage.”

Maria Antonietta Calabro, writing in the Italian HuffPost, said that in his run for reelection, Trump “has targeted the Catholic electoral base, which could make the difference,” especially because part of US Catholicism, she wrote, “is often strongly critical of Pope Francis.”

But the heart of Pompeo’s article in First Things was China’s ongoing violations of human rights and, especially, of religious freedom.

The Vatican, which tried repeatedly over decades to begin an official dialogue with China, has never pretended the country had a sterling human rights record

“With China, our current interest is to normalize the life of the church as much as possible, to ensure that the church can live a normal life, which for the Catholic Church means also having relations with the Holy See and the pope,” Cardinal Pietro Parolin, Vatican secretary of state, told reporters Sept. 14.

Although the Vatican also is concerned with issues such as “peaceful coexistence and overcoming tensions,” the current agreement is focused on the “ecclesiastical issue” of bishop appointments, the cardinal said.

The Vatican official who spoke to CNS said the Vatican believes, “quite seriously, that ours is a technical agreement on the appointment of bishops. We hope it would help the Catholics there.” 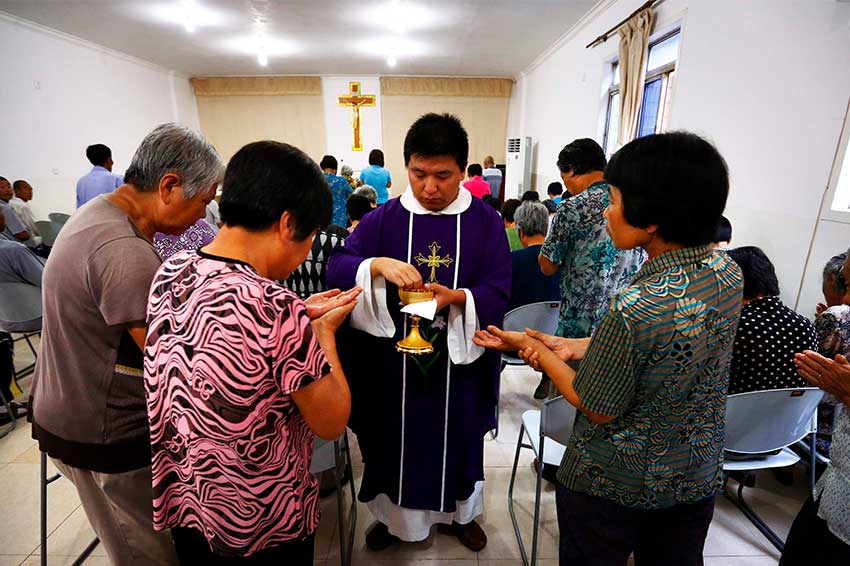 “Dialogue – that’s the only tool at our disposal,” he said, contrasting the Vatican’s position with that of nations who can use weapons or financial deals to sway another country.

The Vatican negotiators do “raise the various human rights issues that impact the Catholic Church,” including the mistreatment or detainment of priests and bishops but have not had great success in that area, he said. However, the agreement about bishops was built over decades and the Vatican plans to persist, even if the going is slow.

In the preface to a 2019 book on the agreement, Cardinal Parolin quoted retired Pope Benedict XVI’s 2007 letter to Chinese Catholics: “The solution to existing problems cannot be pursued via an ongoing conflict with the legitimate civil authorities; at the same time, though, compliance with those authorities is not acceptable when they interfere unduly in matters regarding the faith and discipline of the church.”

“This is the path followed today as well in relations with the People’s Republic of China,” Cardinal Parolin wrote. The Vatican has initiated “historic processes that may not immediately bring the desired results,” but it knows “the definitive solution to complex problems requires time and trust.”