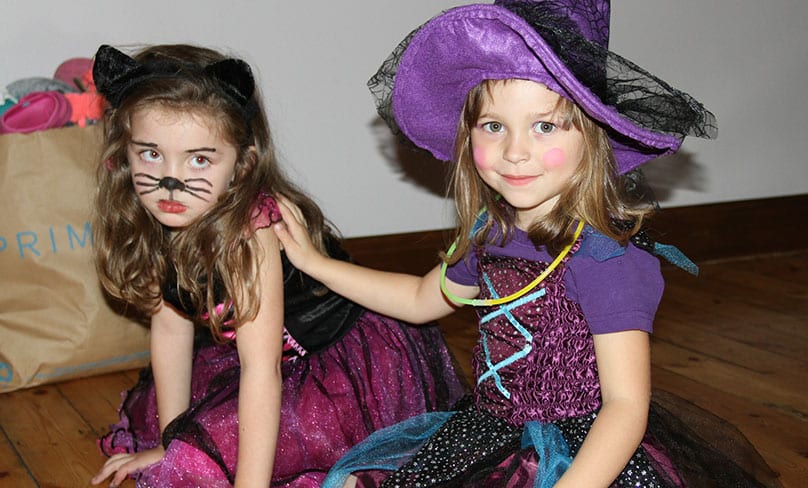 When I start making a Halloween costume for my kids, I begin with joy and enthusiasm. I have a glorious image in my head, and I’m all on fire to put it together and turn my vision into reality.

Inevitably, several steps in, I get bogged down. Even if things are going well and I haven’t made any major mistakes, I get discouraged, because it looks so danged ugly. There’s glue all over the place, the seams are raggedy, the unpainted cardboard frame proclaims “CORN FLAKES” in blazing letters, and I just can’t deal with how much duct tape there is.

This is the point where I have to stop, calm down, and remind myself (and the nervous, skeptical child whose costume it will be): I do have something in mind. It’s not always going to look like this. It looks terrible now, but I have a plan! It doesn’t look pretty because it’s not finished. It’s not supposed to look pretty now.

I have to fight the urge to neaten it up, even if I know that would be a waste of time. It’s so worrisome to see the project looking so bald and junky. But I know that making an unfinished work look finished will use up energy and time I really can’t spare. Even worse, if I spend time thinking about how awful it looks when it’s not finished, I will lose heart. I will get too discouraged to keep working on it. Strangely enough, embracing the ugliness of the unfinished project is what keeps me going.

It’s an awfully useful phrase, “it doesn’t have to look pretty every step of the way.” It’s something I tell myself when I sit down to write a first draft of an essay. If my husband comes by and looks over my shoulder, I want to die of shame, because he’ll see the garbage I’m tapping out, line after line. Then I remember he’s a writer, too, and he knows what first (and second, and third, and fourth) drafts look like. They’re a mess, because they’re only a stop along the way; and pretty often, the liberty that comes when you allow yourself to tap out garbage yields unexpected bright ideas or felicitous phrases that have a place in the final, finished version. Edit too soon, and you’ll lose the good along with the bad. Edit too soon, and you’ll waste time and energy, and lose focus. Chances are, you’ll never finish at all. Better to embrace the ugliness and keep working.

It’s not that the points along the way don’t matter. It’s just that we shouldn’t expect them to be more than they are. We can look at just about anything important, anything worth doing, and we must not despair if the unfinished project looks . . . well, unfinished.

If this is true for anything worth doing, it’s the same for anything worth being. If I take a look at myself and where I am — spiritually, for instance, and I see that I’m a kind of a mess . . . well, what did I expect? I’m not finished, and if I focus too much on making every step look perfect and pretty and finished, if I edit too soon, I’ll lose good along with the bad; and I’ll lose heart. I *do* lose heart. And I forget the point of what I’m trying to do, what I’m trying to be. I forget that I’m working toward something. I’m *becoming* something, and will continue to be becoming as long as I live.

What is our final project? Ah, that’s the tricky part. If I’m making a lobster costume or a vampire costume, I have a general idea of how it needs to look when it’s done. But when it’s our own selves we’re working on, there is less clarity, less certainty. We’re not in the process of making a costume or a disguise; we’re in the process of becoming who we are meant to be. If we have a clear picture in our heads of who we’re meant to be — or, even worse, if we think we’ve already become it — we’re probably wrong. Sorry!

But God knows who we are meant to be, and He wants to help us become that person. So our efforts will be fruitful if we look to Him. Just as we can address our prayers “Not to what I think thou art, but to what thou knowest thyself to be,” we should ask Him to make us not what we think we are, but what He knows we are meant to be.

We should, in fact, worry less about who we are or who we are becoming, and think more on who He is (or who He knows Himself to be). That’s the paradox in this project of becoming more ourselves: We’ll get bogged down if we think too much about ourselves. If we lose sight of Christ, if we forget that our goal is to be with Him, then the project of our lives is doomed.