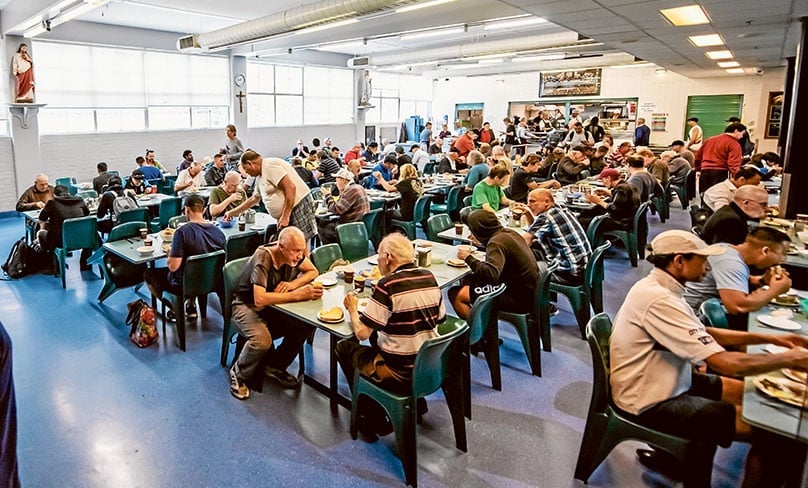 An unassuming elderly gentleman waits patiently in a deserted alleyway of east Sydney, quietly watching the sun slowly rise over the harbour.

The early-morning council trucks rumble past collecting piles of garbage, syringes and bottles while a makeshift bed surrounded by food scraps and rubbish lies against a dirty wall covered in graffiti.

Casually dressed, he buzzes at security and waits for the heavy doors to open.

He enters and goes straight to his post. He is one of the many volunteers who help cover the 400 shifts a week at the Matthew Talbot Hostel.

Marking its 80th anniversary this year, it is one of the most well recognised homeless shelters for men around the Sydney CBD and offers accommodation and support to people who are homeless or at risk of it.

He gets set up for his shift as a barista making coffee for the men before heading to work … as a barrister.

Christopher Maxwell, QC, is the State’s Crown Prosecutor, and has been involved in some of the country’s highest-profile murder cases, yet it’s his time caring for the forgotten that reminds him of what is important.

He has been volunteering in the subsidised canteen for the past five years, a “promotion” from working the floor during the busy breakfast service for 15 years prior to that.

He admits he still gets startled at the start of each shift by the incredible noise the coins make on the metal shutter alerting him the men are in desperate need of their morning heart-starter.

Lollies, chips, toiletries, socks and undies line the kiosk walls … but it’s caffeine they want.
First in line is Mick … pleasantries are unnecessary, Chris knows his order: Six sugars, half a spoon of instant coffee, lots of milk and hot water.

Chris hands the steaming polystyrene cup over and Mick shuffles off without thanks. Chris just smiles and moves to the next customer.

He says the men are connoisseurs when it comes to instant coffee and there is a real art to making it.

“Just because it’s instant doesn’t mean it can’t be good,” he said. “It’s 50 cents a coffee, extra with a marshmallow, so they expect a decent one.”

It is an unlikely place for one of Sydney’s silks; however, he says his time there has taught him some life-long lessons, which have made him a better lawyer.

“I am a much fairer prosecutor, I have a lot more balance in my work,” he said.

“Getting to know these men requires some real Christian compassion, to be more accepting and not judgmental.

“I can now look at life from another side, to turn the other cheek as it were.

“In court I deal with confrontational and skilled opponents and my time at Mat Talbot has taught me to be able to respond in a less aggressive manner.

“Over the years I have met some wonderful people, some of the men I would call my mates. Some have passed away too young and others just disappeared.

“It has made me so much more selfless, I thoroughly enjoy my time at Matt Talbot and hope to continue to do so.”

Venerable Matthew Talbot, after whom the hostel was named, was an Irishman revered by many for his piety and charity. At the age of 12 he began working as a wine seller and very soon began “sampling their wares”, and considered a hopeless alcoholic by age 13. One evening when he was 28, he went out and found a priest, went to confession and “Took the Pledge” to never touch alcohol again.

Though not formally recognised as a saint, (he is at the first stage of canonisation) he is considered a patron of those struggling with alcoholism.

According to the St Vincent de Paul Society there are about 38,000 homeless people in NSW, with about 329 currently sleeping rough in the CBD every night and about 1000 in the metropolitan area, so demand for shelter is always at a premium.

Men aged over 21 can have a bed for the night, a shower, a hot meal, get their medication, call Centrelink, send or receive mail but possibly one of the most important things is to have an anchoring point.

Being homeless and with nowhere else to go, it’s about as close to a family’s embrace as they’ll get.

Sydney Auxiliary Bishop Terry Brady, who himself discovered his vocation as a 14-year-old volunteer at the hostel, said it is a very unique part of Sydney where people can feel safe and secure at the most vulnerable times of life.

“It is a very special place, and not only for Catholics but the whole city and beyond. People see it as a place of care and welcome for the homeless of the city and those that might need a place to put their heads for the night,” he said.

“It is also a spiritual refuge and a place for at least a window of peace and tranquility.”
Official hours are from 5.30am to 8pm however, it never closes. Nobody in need is turned away, if there’s “no room at the inn” another bed is found in another facility.

The men who sleep rough generally line up first thing to use the bathrooms, have a shower and get a change of clothes before breakfast, which is served from 7.15am.

Volunteers stand ready to assist with serving meals, cleaning up or just lending a listening ear to someone who wants to chat.

Despite the huge numbers, breakfasts are eaten in silence, the clanging of knives and forks the only sounds piercing the relative quiet.

A statue of Mary looks out over the sea of lost faces, seemingly casting a caring eye over society’s forgotten.

Over breakfast, Marcus, an imposing German standing at almost 2 metres, talks about “living” at the shelter for about five months and the events that led to him calling it home.
Married with two small children, his life turned upside down following his young daughter’s diagnosis of leukaemia a few years ago.

“I had the perfect life, a house, two cars, two jobs and was happy,” he said.

“Then my daughter got sick, which put a lot of stress on my family. I had to quit my jobs to be with her and the medical bills started adding up.

“We were getting quite desperate, I stole money and pretty much that was the beginning of the end for me. It wasn’t a lot of money but enough to get me in trouble.

“I’m not proud of what I’ve done and given the chance of course I would do it all differently, but I can’t.

“I split with my wife and was couch surfing and living on the streets. While waiting for the courts to deal with me, I had a heart attack and couldn’t afford any medical treatment. My doctor suggested I come to Matt Talbot as I would receive medical care as well as have somewhere to stay.

“That was almost six months ago, and I’m still here.

“The people at Matt Talbot rock, they have provided me with what I need physically, now it’s up to me to sort myself out mentally and get my life back on track.

“Thank God Matt Talbot is here, I don’t know where I’d be without it.” The shelter provides 98 beds and 620 meals a day – breakfast, lunch and dinner – but it is much more than the basics. It’s a community for those living on the margins.

Men have the option of attending the Ozanam Learning Centre, which aims to break the cycle of homelessness by supporting people to achieve their personal goals.

A computer room teaches basic skills and a professional music studio is aimed at helping release inner trauma amid beautiful sounds. An industrial kitchen teaches cooking, nutrition and meal planning and provides an important opportunity for people who have become isolated to break bread as a family.

A hairdressing ‘salon’ – cleverly crafted out of an underused cleaning room – offers the luxury of a cut, wash and blow dry run by a local hairdresser who donates time to give back some dignity

It also has one of Australia’s last surviving medical clinics staffed by nurses and offers treatment for a variety of ailments common among the homeless including diabetes, epilepsy, addiction issues, malnutrition, lung and heart disease.

Accommodation manager Susan Chillingworth said nobody chooses to be homeless. She said their role was to build relationships with the men and keep them engaged and cared for.

“Homelessness can be due to mental health issues, addiction or trauma sustained as a child which can and does last a lifetime.” she said.

“There are no surprises here, we’ve seen and dealt with it all.

“We see the absolute bottom of the pile but then we also see some of humanities best.

“Nobody wants to be here, but for the ones that are we try to make it as pleasant as possible. “These men deserve to be treated with dignity and respect and know they will be treated as equals.” Mother Teresa believed that the true measure of any society can be found in how it treats its most vulnerable. She would be very pleased.

*A Mass to mark Matthew Talbot’s 80th anniversary will be held at St Patrick’s Church Hill on Thursday, 13 December at 10.30am.