By Mike and Alicia Hernon

How It All Began

I still remember the conversation on the beach that changed my whole approach to men’s initiation.

I was on vacation with my extended family and talking with two of my brothers-in-law about our sons. We were each reading Christian books about manhood that suggested that a key step in helping a boy become a man was a rite of initiation.

Up until that time, if you had asked me to react to the word “initiation” I would have said things like “frat boys” or “secret cults.” When I was growing up, I’d never experienced any sort of ceremony or invitation from my dad to become a man, and neither had my in-laws. But given the state of masculinity in our culture, we were each convinced our sons and future sons needed more than just a model of manhood: they needed to be explicitly shown the path from boyhood to manhood.

Our beach conversation moved from “wouldn’t that be cool if we did things like that?” to “how could we make this happen?”

My brother-in-law’s son was a toddler at that point, but he was already thinking ahead. He knew someday that beloved son playing in the sand would be an awkward pre-teen bombarded with toxic cultural messages. We each had memories of our own rocky teen years. How tough it had been to figure out who to listen to and what to do, and not do. And the culture had only gotten worse since then.

The Company of Men Weekend

So we started to put together what became the “Company of Men weekend.” It took us years to put together: we aren’t kidding!  It wasn’t just crafting the content: it was also contacting other relatives and persuading them to change their schedules and block out a weekend to make this happen for our sons.

When my oldest son Patrick was 13, we held the first Company of Men weekend at my father-in-law’s hunting cabin.

Now Patrick is 26 and a father of his own family, and we have initiated nearly ten of my sons and nephews into the Company of Men. It has been an incredible journey and a privilege to do this.

But we knew this was something we couldn’t just treasure for our family: we needed to share this with other families as well.  This is one of the reasons why the Messy Family Project began offering the Dads vs. Wild course. We want to help other dads gather a company of men and show their sons a path to becoming Catholic warriors.

What is an Initiation Weekend?

It is a powerful experience that gives formation but is also the beginning of formation, where the company of men begins to intentionally form the boy into a man. The initiation will look different for different families, but I want to teach the model that we used in the hope that it will be helpful.

I don’t think I need to tell you that the world has been targeting and attacking boys for some time. There are many different ways that this happens, but I’ll list off a few of the biggest ones. 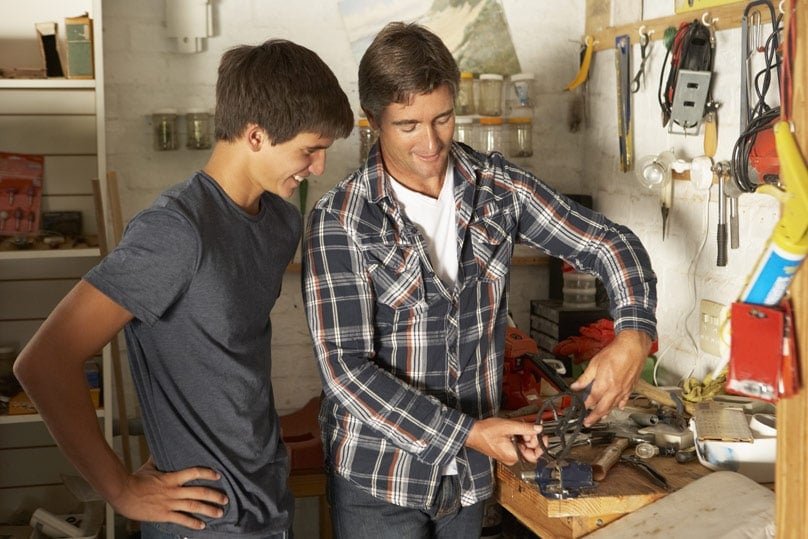 Why We Need to Be Intentional in Forming our Boys

First of all, the unique and special call of men is attacked. Boys are taught by the world that they are the same as girls, and that basically, they are interchangeable: that a boy, in different clothes or body parts, is the same as a girl.

It IS true that men and women and boys and girls are equal in dignity before God! But this lie of interchangeableness leads boys to believe that there is nothing special about being a boy, or a man–or being a girl, or a woman. Nothing could be further from the truth!

Additionally, boys are told that masculinity itself–not masculine sinfulness–is toxic. Studies show repeatedly that institutional schools have become oriented towards feminine ways of learning and understanding. This disadvantages and even shames boys for being louder, motion-oriented, objective, and aggressive.

Even more troubling, when boys are being shamed for not being more like girls, there’s an alternate culture online and offline that glorifies violence and aberrant behavior waiting to fill the gap. This also isn’t what we want for our sons.

One of the single biggest differences between boys and girls is risk-taking. But risk-taking itself is constantly attacked in our culture, with its emphasis on safety and conformity. Restrictions on the pandemic have only exacerbated this! Boys are being encouraged to become fragile and their risk-taking is undervalued instead of channeled.

These are just a few reasons why we have a deep desire for the world to NOT be the one forming our sons. We need our boys to aspire to responsible manhood. We need to help them have the adventures their masculine souls crave.

Initiation into the Company of Men is one step on the journey of formation. On the Dads vs. Wild course, it’s one of the five steps I talk about. The course is designed to inspire fathers to be intentional about guiding their sons onto the journey of true Catholic masculinity. The world isn’t going to make it easy for our sons to become men. Inviting our sons into a company of dedicated men who are willing to help usher them into Catholic warrior-ship is one way we can show them the path.

By the way, if you’d like to hear more on this topic, check out my interview on raising sons with the Catholic Man Podcast.

Register for the Dads Vs Wild course.

– Published with permission by The Messy Family Project.