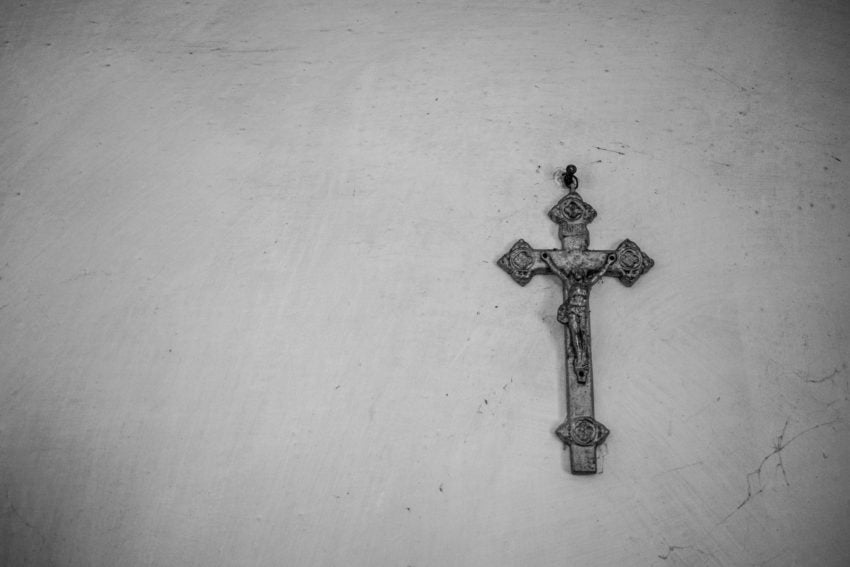 An exorcist cleansed a local house of oppressive spirits, some time ago. A friend of the priest who exorcised it told me that he had remarked that there were no crucifixes hung anywhere on the walls, even though the family was Catholic.

No crosses, no icons, no devotional pictures, no holy cards, no tin Sacred Hearts, no dried-up palm branches stuffed behind a family photo. No Bible, decorative or otherwise. But especially, no crucifix.

I only heard his comment second-hand, so I’m not sure if there was any follow-up, or how much importance he attached to it. Still, he thought it was worth remarking on, and so it’s something I’ve been thinking about. Why should we hang crucifixes in our house, if not to ward off demons?

Well, warding off demons isn’t actually a bad motivation. The cross, and specifically the crucifix, does have a certain amount of power just because of what it is, and (just purely speculating as a layman). I can imagine an unclean spirit at very least feeling uncomfortable around it, and less willing to settle in.

But of course, the crucifix isn’t a magic charm or a lucky horseshoe. What I can more easily imagine is an unclean spirit feeling uncomfortable in a house where a crucifix is not only hung, but noticed and revered.

But let’s say you hung up a crucifix, and that was the end of it. You did it because you always had one growing up, or because you wanted to make your grandmother happy, or because it just looks pretty. You don’t especially revere it or even notice it after a while. Is it still worthwhile?

I think so. In 2019, simply hanging a crucifix on the wall where everyone can see it will likely feel like an act of courage and loyalty in this aggressively secular, post-Christian time. It’s not easy to buck the culture.

But if your house has no crucifix or other holy images on display, and especially if you’re resistant to the idea of making that happen, you could ask yourself why. If your reason is purely aesthetic, that’s an easy problem to solve.

No matter how carefully curated the decor of your house, there is a crucifix for your tastes. In the course of two thousand years old, Christianity has reached every culture and continent, and that means there are crucifixes rendered in every conceivable style. That’s kind of a feature of the cross: It’s never going to be irrelevant, anywhere or at any time.

But that’s just aesthetics. Maybe your antipathy goes a little deeper, and you’re afraid people will think you’re some kind of fanatic — or worse, they’ll see you as some kind of pervert or enabler. Maybe, this being 2019, you don’t hang a crucifix because you don’t want to be associated with the ugliness that is so often the face of the Catholic Church today.

Well, that is actually the point of the cross. It is ugly. It is shameful. It is painfully public.

It shows innocence betrayed, and it shows someone suffering for crimes he did not commit. It shows humanity’s darkest hour. It is therefore especially appropriate to display when the corporate Church has let its flock down so horribly.

Refusing to hang the crucifix because you don’t want to be associated with things like that is dangerously close to rejecting Jesus.

If you can’t be publicly Catholic when being Catholic looks bad, then what’s the point? The way Jesus found himself on the cross in the first place is because he decided to hang around with the likes of us. He chose to associate himself with a whole race of perverts, enablers, cowards, narcissists, predators, liars, cheats, and thugs, and this is where it got him.
This is where it got us: A few breaths away from the Beatific Vision, by way of the cross.

And it’s so you can look at it in terrible, painful times and see that pain is never empty and meaningless because is full of the company of Christ. And it’s so you can remember that the cross, that instrument of torture, is occupied — not by you, but by the one who took your place for no good reason at all except that he loves you.

The crucifix isn’t a lucky charm that chases away bogeymen. It’s something much stranger: It’s the disrupter of every fakery and the answer that makes a mockery out of every foolish question. But it hangs so quietly, willing to be ignored.