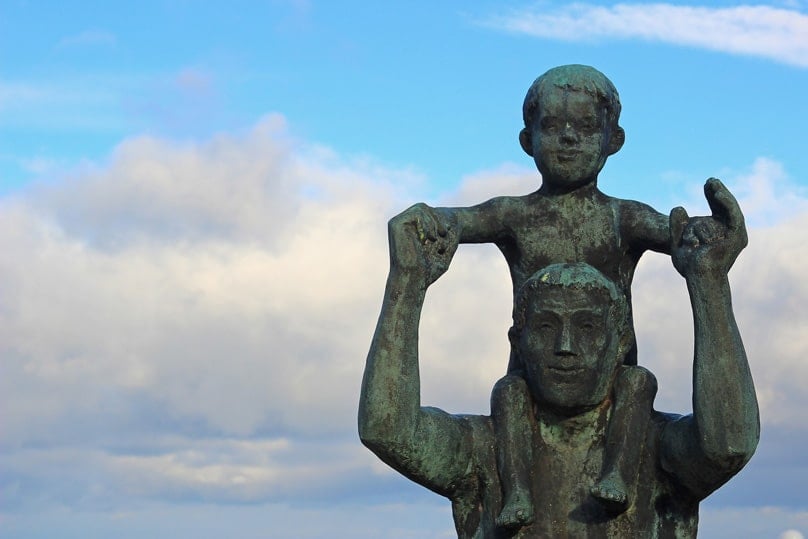 Did you know that it’s almost Lent? Huh, huh, didja?

Well, it’s not. But it’s almost almost Lent, and the liturgical year is good for two things: sneaking up on us like a thief in the parking lot, or giving us time to think about getting ready to prepare for the time of preparation. And this, my friends, is one of those times. Or possibly the other one of those times.

One thing to think about? One of the precepts of the Church is that we are obligated (obligated! Similar to our terrible, burdensome duty of finishing up the mint chocolate chip ice cream, and never mind your feeble excuses!) to receive the Eucharist at least once during the Easter season; and, for many, that means finally getting your heinie into confession sometime during Lent.

But, as we mentioned, it’s not Lent yet. So let’s be stupid for a little bit, before the hammer comes down. Let’s practise by letting the kids examine my husband’s conscience. Yes, let’s.

We’ll start out easy. Daddy – they might ask – Daddy, did you kill anyone?

And he would answer: No, I did not. Well, I killed the parakeet. Well, he was definitely dying anyway, and not quickly enough to suit any of us, least of all the bird himself, who never really recovered from the shock of realising he was now one of us. It turns out the humane society charges fifteen bucks to off a parakeet, and they don’t even give you the cage back! So what you do, see, being paterfamilias and the only one in the house who knows how to drive stick shift, is you get a paper bag. Why does it have to be paper? It just does.

You get a paper bag, you put in the bird, you step out into the driveway, and then you save yourself fifteen bucks. But other than that, no, I did not kill.

He was dying anyway.

I did not steal. You know how you can tell? Because if I stole something, where would I put it? In my sock drawer. Ho ho ho. It is full of skinny jeans that your mother, who is a very beautiful woman, is definitely going to fit back into someday. Up on that high shelf that no one can reach? Yeah, sorry, that unreachable shelf is full up with twisted fragments of all the eyeglasses the baby climbed up and reached and twisted into fragments, presumably with that terrifying, rapt look mayhem in her eyes. Maybe under the bed? No room – the dog is under the bed. He is hiding from the baby.

I did not steal.

Did you miss Sunday Mass?

Did I miss it? No, I did not. Was I there? Not especially. I came very close to making butt contact with the pew, but then the child known by the ushers as “She’s a real firecracker, ain’t she?” took off at a blistering speed toward the altar, and by the time I nabbed her by the hem of her puppy dress, the Gloria was over and the little runt had army-crawled her way all the way to the back, presumably taking the under-pew route, and in her sights was that rickety, thirty-gallon holy water tank. So we went to the basement and ate donuts. But no, I wouldn’t say we really missed anything. They certainly didn’t miss us.

Did you bear false witness?

Children, I know that Daddy once told you that the dinosaurs never went extinct, but now live inside the earth, which is hollow like a ping pong ball, if a big pong ball were full of somewhat lonely and disoriented dinosaurs. I know that Daddy may have mentioned that he invented lollipops when he was five, but that a bad man stole his invention and that’s why we never have lollipops in this house. And I know that Daddy possibly let it slip that he has a prosthetic nose, and if you keep smacking Daddy in the face like that, Daddy’s nose is going to fall right off and we can’t afford a new one right now because we spent all our money on milk for the children.

But Daddy believes very strongly in telling the truth at all times, and that’s why you need to believe Daddy when he says it is bedtime.

And that is no lie.

Okay, but Daddy, did you commit … what is this word … a-doll-tory? Whatever that is?

Children, let me tell you a story about a man just like me. He had a good wife who loved him very much. They had been married for a very long time, a very, very long time, and one day, he got it into his head to wonder what it would be like to step out with another woman just one time. He didn’t do it or even say it out loud; he just thought it. Next thing he knew, he was lying in a pool of his own blood, and in his ear was the voice of his beloved wife, softly whispering, “How do you reload this damn thing?”

Daddy loves your mother very much, and that’s the end of that. Amen.