The moment the cell door slammed behind him, Vietnamese priest Fr Paul Van Chi believed he had entered hell on earth.

The Sydney chaplain to the Vietnamese Catholic community says there’s no other way to describe the four years he spent imprisoned in his homeland during the 1980s.
His crime? Composing and promoting Catholic hymns and being loyal to his bishop made him an enemy of the communist regime.

“I could not understand why I was there, it was really like a hell,” he said.

That’s why he understands the agony of the family and friends of Chau Van Kham, a 70-year-old retired baker from Sydney who supporters say has been falsely convicted of terrorism and imprisoned by the Vietnamese government.

While Mr Chau is not a Catholic, Fr Paul says the retiree’s situation is similar and that he is undoubtedly undergoing the same kinds of deprivation Fr Paul experienced in Vietnam from 1984 to 1987.

Ordained in Saigon in 1975, the same year South Vietnam fell to communist rule, Fr Paul was a young priest and popular choir master.

Initially placed under house arrest, local Party authorities tried to convince him to become a Party officer, to deny Jesus, denounce the Church and accuse his bishop of crimes. When he refused he was taken to his new home, solitary confinement in a cell measuring roughly one by two metres.

That was followed by months in a re-education camp. The weight began to shed from his already-slight frame; there was never enough food or water and relatives were usually forbidden from sending the medicine he needed.

“I am sure it is the same today,” he said, shaking his head during an interview with The Catholic Weekly.

He said he was tortured with beatings, sleep deprivation and by having obscenities screamed at him, matching constant intense psychological pressure to betray his faith and other clergy. But he never stopped praying – silently, so as not to be punished, and was sometimes able to say Mass alone using a small amount of wine labelled as diarrhoea medication and communion hosts hidden in parcels of bread.

Denied medication for severe haemorrhaging, Fr Paul believes that at one point, he died.
When he was released to die outside hospital, staff were forbidden to treat him but friends ensured that he had the life-saving surgery he needed.

In 1988 Fr Paul secretly escaped Vietnam in a crammed boat with about 70 others. They were rescued by a French ship and taken to the Philippines. The Archdiocese of Sydney sponsored Fr Paul for resettlement here.

His own experience gives him insight into the case of Mr Chau, an Australian citizen who, with his wife, lived here for 30 years.

The former Sydney baker is currently in jail after a Vietnamese court sentenced him last November to 12 years in prison as a result of his affiliation with a US-based human rights and political group called Viet Tan.

The network is committed to democratic reform of Vietnam through peaceful and political means. Although the United Nations describes Viet Tan as peaceful, the country’s government has declared it a terrorist organisation.

The President of the Vietnamese Community of NSW, Paul Nguyen, told The Catholic Weekly Mr Chau had entered Vietnam to meet with local members of the pro-democracy group when he was arrested early last year.

“Instead of being deported – as we would normally expect – he was imprisoned for 10 months without trial. During that period they started to fabricate evidence [against him],” Mr Nguyen said.

“They charged him with the very serious crime of a conspiracy to overthrow the government, which carries the death penalty or 20 years in prison. But because they had no evidence to support that charge they changed it to being a terrorist as a member of Viet Tan with a maximum sentence of 15 years.”

After a trial lasting just four and a half hours, Mr Chau had was sentenced last November to 12 years in jail. Late last year members of the NSW Chapter of the Vietnamese Community in Australia travelled to Canberra to lobby MPs on both sides of politics as well as the Senate human rights sub-committee.

Federal member for Fowler Chris Hayes addressed parliament the following week to call on MPs to take “all reasonable steps” to ensure Mr Chau can safely return home to Australia.

“The Vietnamese government has shown that they are unwilling to adhere to the rule of law, and are keen to oppress, jail and exile those who simply advocate for the most basic of human rights,” Mr Hayes said.

Mr Nguyen said the Vietnamese community is hopeful the Department of Foreign Affairs and Trade will intervene on Mr Chau’s behalf.

“This is a clear human rights issue, even if a person is simply affiliated with the organisation without any evidence of wrongdoing he or she will undoubtedly be under surveillance and could be in danger,” said Mr Nguyen.

Fr Paul said he had met Mr Chau on a number of occasions and that he is hoping and praying for his release and humane treatment while in jail.

“Mr Chau is a very good activist for human rights and the Vietnamese Catholic community here is also very keen to urge the communist regime to respect human rights, especially the freedom of religion,” he said.

“They always put pressure on the Catholic Church in Vietnam. Anyone who works for freedom, for democracy, they put in prison.

“They are afraid there will be freedom in Vietnam and so they come down very heavily on a few individuals like Mr Chau in order to deter others.

“We are worried about his health, he has suffered too much. He is very sick with a prostate condition and cannot receive his medication from here. We want to urge the communist government to let him receive the medication he needs, but we are guided by the Australian government and DFAT to secure help for him.” 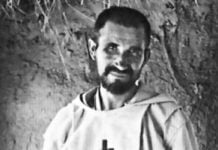 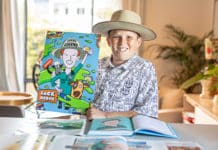 The Power of Jack