On 18 February the Church celebrated a truly remarkable Christian sacred artist, whose creative genius and holiness were recognised in equal measure during his lifetime and by the Church ever since.

On the 18 February 1455, Guido di Pietro, Brother Giovanni di Fiesole, the painter priest, died in a Roman convent of the Friars Preachers, the Dominicans, at about 60 years of age.

Guido is better known to us by his holy nickname, Fra Angelico, “the Angelic brother”. His astonishing interpretations of the mysterious event of the Annunciation, his intimate and spare frescos of the life of Jesus Christ and his altar pieces are some of the most widely recognised surviving works from the great flowering of Western art in 15th century Italy.

Fra Angelico was only formally beatified by Pope John Paul II early in his pontificate in 1982, although he had been known as “Il Beato” for many centuries since his death.

There are only clues as to the emergence of Fra Angelico’s talent. It is likely, that he began in the illumination of manuscripts and miniatures used for study and the liturgy. In Fra John, there was a unity of a contemplative method in his work, his humility and personal austerity and his wondrously angel-touched iconography which gave rise to his enduring and popular name.

He began quietly adorning chapels and painting religious works in such places as Cortona and Fiesole. He was then invited to what might be described the great living-sacred space commissioned by Cosimo Medici, the Convent of San Marco in Florence. (Sadly in a way, this is no longer a living convent but a Museum.) Here Fra Guido, painted not only the great Annunciation and Altar Piece, but also the friars’ cells. His great devotion to the Blessed Virgin Mary was as Pope John Paul II pointed out, almost miraculously incarnated in the lovely glowing delicacy yet strength of his Marian faces and figures.

Fra Guido, quickly drew the attention of two Popes, Eugenius IV and Nicholas V for whom he worked in Rome.

Fra Angelico’s many works (over 50 surviving) represent the marriage of two great sacred art traditions, the mystagogical transparency of the Byzantine Icon and emerging celebration of Creation and the human face and body in a theology baptised by St Thomas Aquinas and Saints Francis and Dominic.

In his excellent study of Fra’ Angelico’s Florentine altarpiece, The Beauty of Holiness and The Holiness of Beauty, English theologian Fr John Saward writes, “The medieval artist had a job of work to do – for the glory of God and for the good estate of the Church.”

There was nothing precious or indulgent about the life of John of Fiesole, or for most other medieval artists. Fra Angelico, “knew nothing of the galleries and salons, foppish critics and fastidious collectors,” Saward writes. Fra Angelico was not painting to satisfy his own creative urges nor primarily to make the friars lives more beautiful (though he most certainly did that).

He was a friar of the Observant reform, who along with his Archbishop, the great St Antoninus endeavoured to restore by concrete example, the life of preachers given to contemplation and evangelisation nourished by the simplicity and charity of the Gospel.

For Fra Angelico, the beauty of Creation and the reflected creative fruit of men and women’s imaginations is a confessio – as St Augustine calls it, a witness to God the source and energy behind and through true beauty. Art was a vocation, a service to higher beauty, the worship and gratitude to God, the tri-personal Beauty.

Nor did Fra Angelico hide his eyes from injustices and crimes of his age. Like his sister in religion, Saint Catherine of Siena, he fully realised that the human side of the Church was covered with wounds, sores and corruption. However he would not have comprehended the often posed ironic defacement and the pastiches of irony and self-hatred that are typical of “progressive” art in our times.

Instead he lived his vows as a humble friar dedicating himself to deepening the faith and hope in others: a model of a virtuous artist who by his beauteous art, presented a gift of healing hope, faith and delight to the world. The inscription on his tomb in Santa Maria Sopra Minerva begins:

When singing my praise, don’t liken my talents to those of Apelles.
Say, rather, that, in the name of Christ, I gave all I had to the poor. 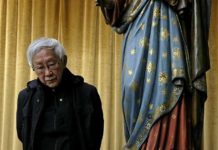